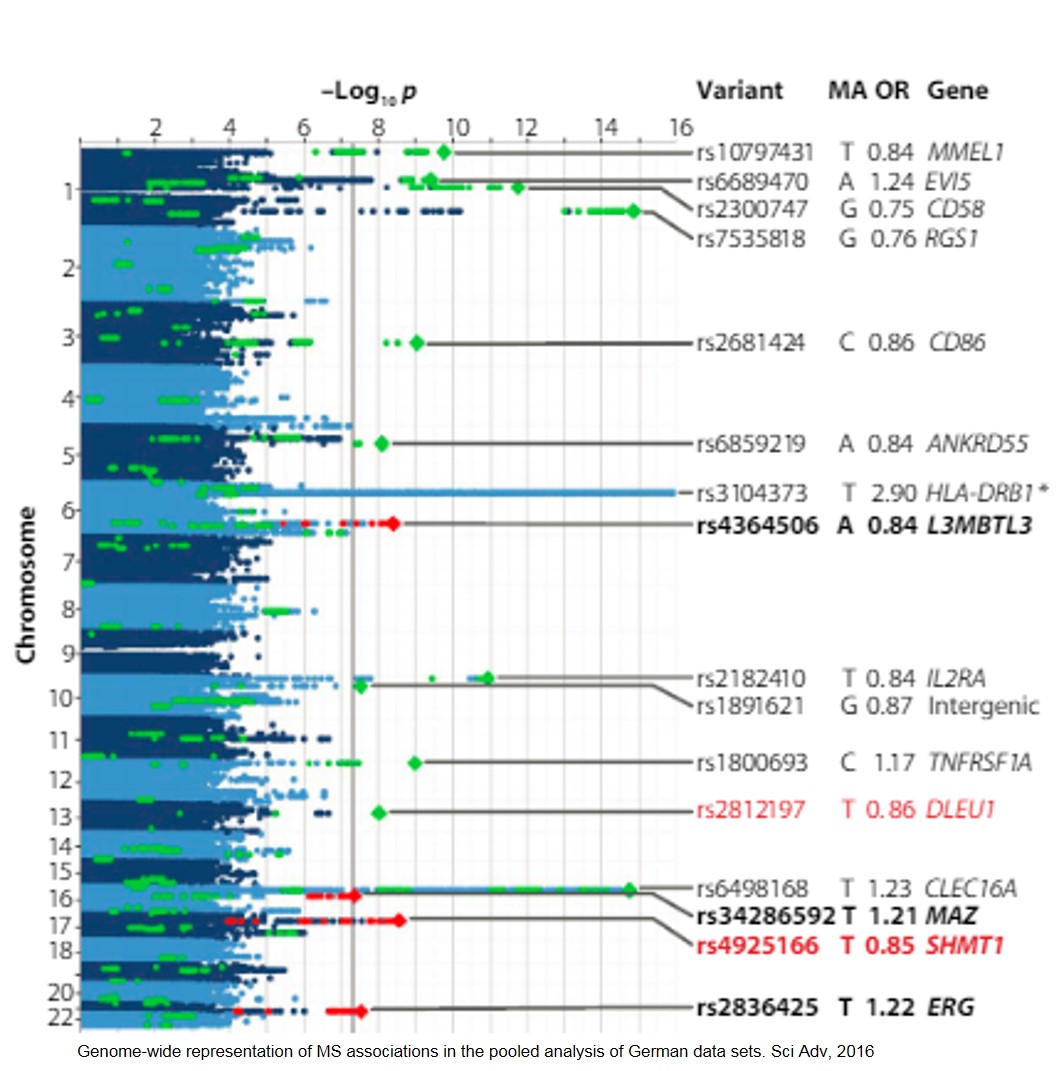 Scientists have identified four new risk genes that are altered in German patients with multiple sclerosis (MS). The results point to a possible involvement of cellular mechanisms in the development of the disease, through which environmental influences affect gene regulation.

"All four genes are important for regulatory processes within immune cells. Interestingly, they are linked to epigenetic mechanisms. These are bookmarks in the genome that are placed by environmental influences and control the expression of genes", explains the author.

Epigenetic signals mark DNA sequences in human cells and are critical for regulating which of the approximately 20,000 genes inside a cell get activated. These signals are programmed by environmental influences throughout a person's lifetime.

SHMT1 encodes a serine hydroxymethyltransferase catalyzing the transfer of a carbon unit to the folate cycle. This reaction is required for regulation of methylation homeostasis, which is important for establishment and maintenance of epigenetic signatures.

The findings expand our understanding of the extent to which genetic influences play a part in the development of MS: "Because the hereditary component in developing MS is limited, environmental factors strongly contribute to the disease. They can influence the activity of MS-relevant genes via epigenetic mechanisms. We have now discovered indicators for regulation of methylation being a potential interface where genetic and environmental MS risk factors interact", says Research Group Leader.

Not only did the scientists identify four new risk genes in the German population, but they also confirmed the existence of a dozen previously identified genes. In contrast to earlier studies, they took a new methodological approach: instead of examining a large number of international samples from different ethnic groups, the scientists focused on a single population of genetically homogeneous German patients. This allowed them to identify risk genes that had so far not been discovered in international studies. With just under 5,000 patients and a sample of over 10,000 healthy people, this is the largest genetic MS study carried out in a single country to date. The study has been published in the current edition of the journal Science Advances.

Multiple Sclerosis is an inflammatory disease of the central nervous system. With about 200,000 people affected in Germany alone, it is one of the most common neurological diseases among young adults. In the majority of cases, MS is a relapsing-remitting disease that causes a wide range of symptoms, including visual disturbances, paralysis, numbness, and dizziness. Its cause remains unknown. Mitochondria as Therapeutic Targets in Transplantation