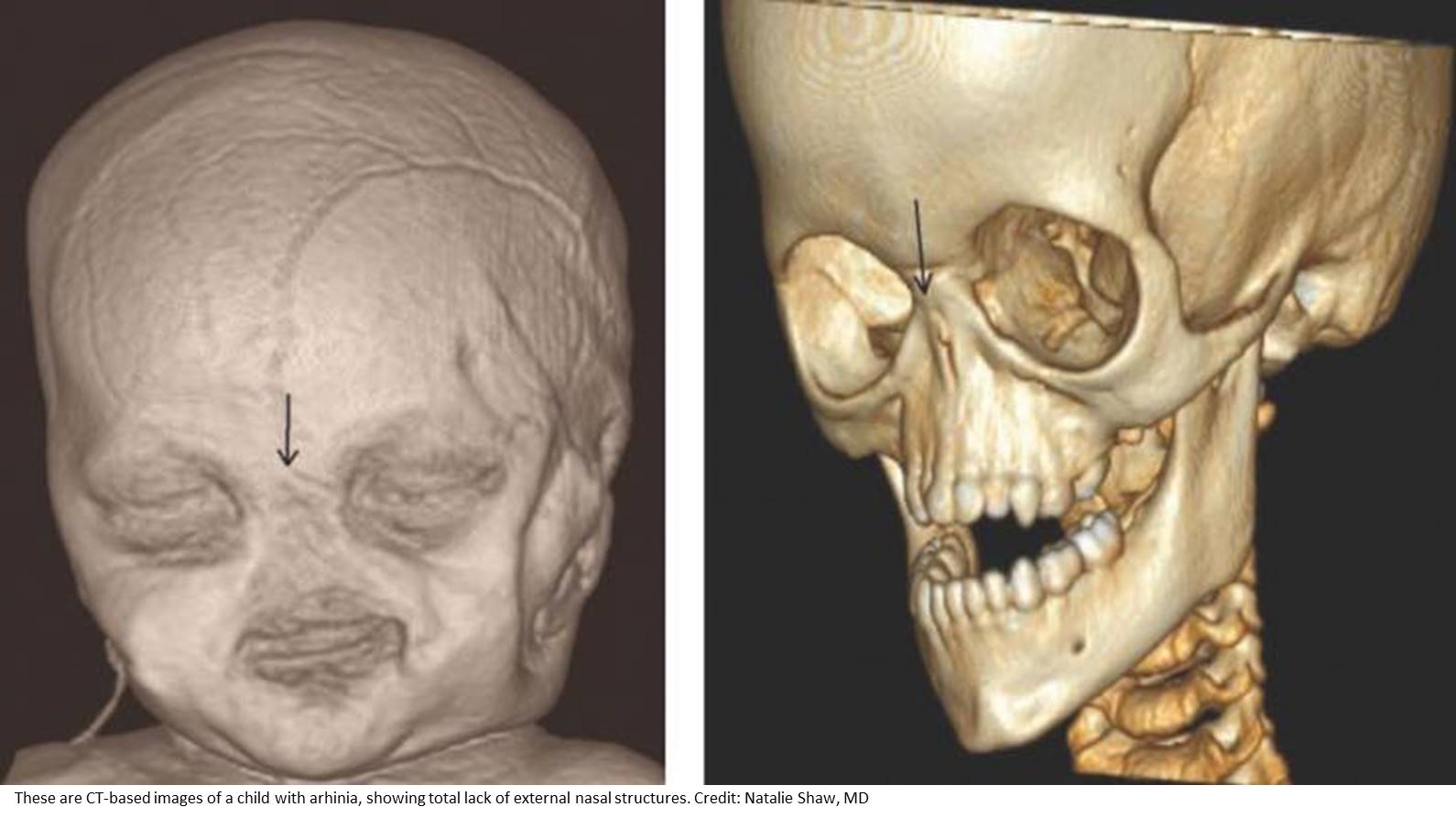 Research team that has identified gene mutations associated with a rare congenital condition involving the absence of a nose and often accompanied by defects involving the eye and reproductive systems. Surprisingly, mutations in the same gene, SMCHD1, have previously been associated with a form of muscular dystrophy. The findings are described in a report published in Nature Genetics.

"Fascinating genetic studies had been done on SMCHD1 that linked the gene to FSHD2, a rare muscular dystrophy involving the interaction of multiple genetic sites, but it had never been connected to craniofacial abnormalities," says co-senior author of the paper. "Our finding from statistical analyses of all genes in the genome that SMCHD1 was the only plausible site of causal variants for arhinia - lack of a nose - was frankly shocking, since prior to our study no patients had ever been reported with both conditions."

Researchers reached out to clinicians worldwide to identify patients with arhinia - before this study only 80 cases had been reported during the past century - and gathered samples for genetic sequencing.

The investigators screened the genomes of 40 individuals with arhinia and 55 family members, from a total of 38 families, revealing rare single-nucleotide mutations within the SMCHD1 gene in 84 percent of affected individuals. SMCHD1 codes for a protein that regulates the expression of other genes and had previously been shown to contribute to FSHD2 (fascioscapulohumeral muscular dystrophy 2), a condition characterized by muscle weakness affecting the face, shoulders and upper arms.

Prior to this study, no individual had been reported with both ahrinia and FSHD2. But evidence from two of the families in the current study suggests that such individuals do exist. As an example, in one family a child with ahrinia had inherited an SMCHD1 mutation from his father, who did not have arhinia but was later found to have symptoms suggestive of FSHD2.

This initial gene discovery led to a series of complementary experiments by collaborators seeking to understand how these SMCHD1 mutations may cause arhinia. They blocked the gene's expression in zebrafish, which resulted in abnormal facial cartilage, smaller eyes and structural abnormalities of neurons involved in the development of reproductive organs.

Another team Edinburgh did not find any effects of SMCHD1 mutations in mice, and the senior author notes that this may reflect the involvement of several mutations in arhinia - similar to the way SMCHD1 mutations contribute to FSHD2 - and that many factors can alter how the conditions are manifested.

To explore this question another team investigated in arhinia patients patterns of methylation - which can suppress transcription of a DNA segment - at a region of the genome known to be altered in FSHD2, revealing that the arhinia patients often had identical methylation changes in the same region.

"Among families having several members with SMCHD1 mutations, we observed some who did not have complete arhinia but had an abnormally small nose or lacked a sense of smell, as well as the one individual that had symptoms of FSHD2 but no craniofacial abnormalities, indicating this is not a simple genetic model," says the senior author.

"We still have a lot of questions to answer, including how these mutations interfere with craniofacial and reproductive development and why the same mutations can have such different effects in different individuals. But our findings do indicate that patients with arhinia may be at risk and should be evaluated for the potential to develop FSHD2 and that individuals with SMCHD1 mutations may be at risk for having a child with arhinia."