Gene variants that significantly influence how the body distributes fat 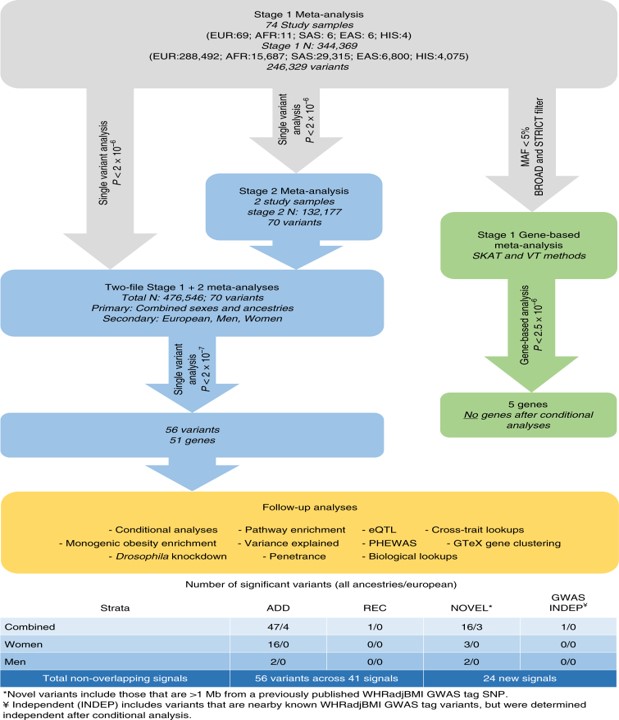 The research identifies genetic variants associated with obesity that are central to developing targeted interventions that can reduce the risks of chronic illnesses to which obesity contributes in significant ways.

Genome-wide association studies previously identified 49 loci (positions along a chromosome where the related genetic variants are located) that predispose individuals to a higher waist-to-hip ratio (WHR), a way to assess body-fat distribution. Lower values of WHR are associated with lower incidence of these diseases.

In this study, that included more than 476,000 individuals from more than 70 different study sites, focused specifically on coding variations, which have the potential to change the function of genes and their proteins. The team found 24 variations that predispose to higher WHR. Further analysis revealed pathways that influenced not only metabolism, but also the regulation of body fat tissue, bone growth and adiponectin, a hormone that controls glucose levels and breaks down fat.

The team also performed functional studies across other organisms and identified two genes that affect body fat accumulation across species. Authors observed a significant increase in the total body triglyceride levels for these two genes (DNAH10 and PLXND1). They implicate these novel genes in fat distribution, stressing the importance of interrogating low-frequency and protein-coding variants.

The lead author of the research said, "A better understanding of the genetic underpinnings of body fat distribution may lead to better treatments for this highly prevalent disease and the cascade of downstream diseases obesity also impacts."

The joint lead author said, "The study is one of the largest ever to explore the influence of low frequency and rare coding variation in body-fat distribution. The information the team collected on the impacts of the rarer variants they discovered is particularly valuable."

"For the first time we were able to look at, on a large scale, how low-frequency and rare variants influence body fat distribution," said another author. "These variants are rarer in the population, but the effects they have on individuals are much larger, possibly making them more clinically relevant."

Another author said, "By knowing the genes that determine where excess fat will be stored - is it preferentially at the hips or more often at the waist - we are a step closer in understanding the biology that explains why some people, when they gain weight, are at risk of diabetes or cardiovascular disease, and why others are not. "
Another major finding from this study is the importance of lipid metabolism to body­fat distribution, which could lead to a better understanding of the causal influence of body fat distribution on downstream diseases like type 2 diabetes and cardiovascular disease.

Examining these less common and potentially protein changing genetic variations is an important step forward in understanding how genetics, body fat distribution, and chronic illnesses are linked together. However, that more work needs to be done to further explore how the changes manifest and how they can be harnessed to improve health outcomes. How rats and humans are able to forget distracting memories (select…