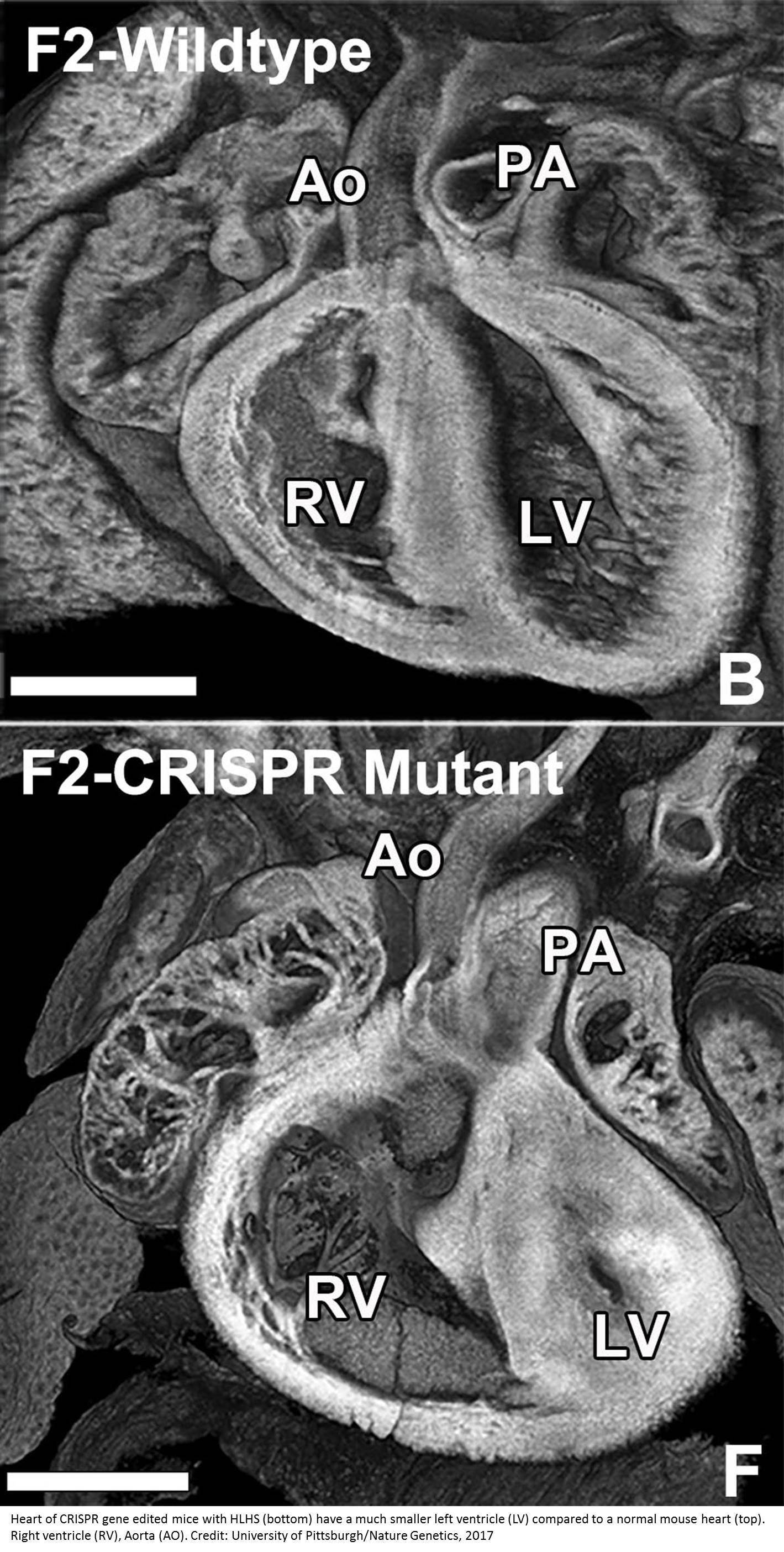 Congenital heart disease, or structural abnormalities in the heart that are present at birth, affect up to 1 percent of all live births. Hypoplastic left heart syndrome (HLHS) is a rare congenital heart disease where the left side of the heart is poorly developed, resulting in an inability to effectively pump blood to the rest of the body. It occurs in about 2 to 3 of every 10,000 live births in the United States, and is fatal if left untreated.

Current treatment for HLHS involves multiple complex surgeries in the first few years of a child's life, and while effective in many patients, it does not improve heart function in many others. In those individuals, heart failure ensues and heart transplantation is required. The five-year survival rate for HLHS patients is approximately 50 to 70 percent.

Though genetic risk factors are known to play a role in HLHS, specific genes have been hard to identify. The first known identification of two genes responsible for HLHS has been now reported by researchers in the journal Nature Genetics.

"Studying diseases with complex genetics is extremely challenging. Our study has been made possible by leveraging findings from a large-scale analysis in mice to recover mutations causing congenital heart defects. This resulted in the recovery of the first mouse models of HLHS. Analysis of these mice with HLHS allowed us to identify for the first time two genes interacting in combination to cause HLHS," said senior author of the paper. "By understanding the genetics and biology of HLHS, this can facilitate development of new therapies to improve the prognosis for these patients."

By comparing the genome of mice with the HLHS heart defects to the genome of normal mice, the team identified several hundred mutations in the HLHS mutant strains. Further analysis of these mutant mice indicated the genetic origins of HLHS likely involve many interacting genes. The relevance of these mutations was reinforced by the fact that many also were found in the same chromosomal regions previously shown to be associated with HLHS from human genetic studies.

In one mouse strain, they discovered that mutations in two genes, named Sap130 and Pcdha9, were required for HLHS. "Interestingly, HLHS was found only in animals with mutations in both genes. However, animals that had mutations with Pcdha9, but not Sap130, can display defects in the aorta, but with normal-sized left ventricles, suggesting interaction between the two genes is needed to cause all the features of HLHS," said the first author of the new study.

Using CRISPR-Cas9 gene editing in mice, the researchers confirmed that mutations in these two genes can cause HLHS. Additionally, they sequenced 68 HLHS patient samples and found one individual with rare mutations in both SAP130 and PCDHA genes.

Molecular analysis showed that heart cells in affected animals were poorly developed and had mitochondrial defects, indicating that Sap130-Pcdha9 gene interactions play a crucial role not only in heart development but also in regulating metabolic function of the cardiac muscle.

These findings suggest HLHS may be associated with a fundamental cellular defect in the heart muscle that can compromise blood flow in patients. This has important therapeutic implications, as surgical repair will not be able to address the cellular muscle defect in HLHS patients, the first author.

The researchers are investigating other mutations identified through the genetic screen and plan to undertake more genetic analysis of HLHS patients to better understand the molecular and genetic factors that cause the disease.