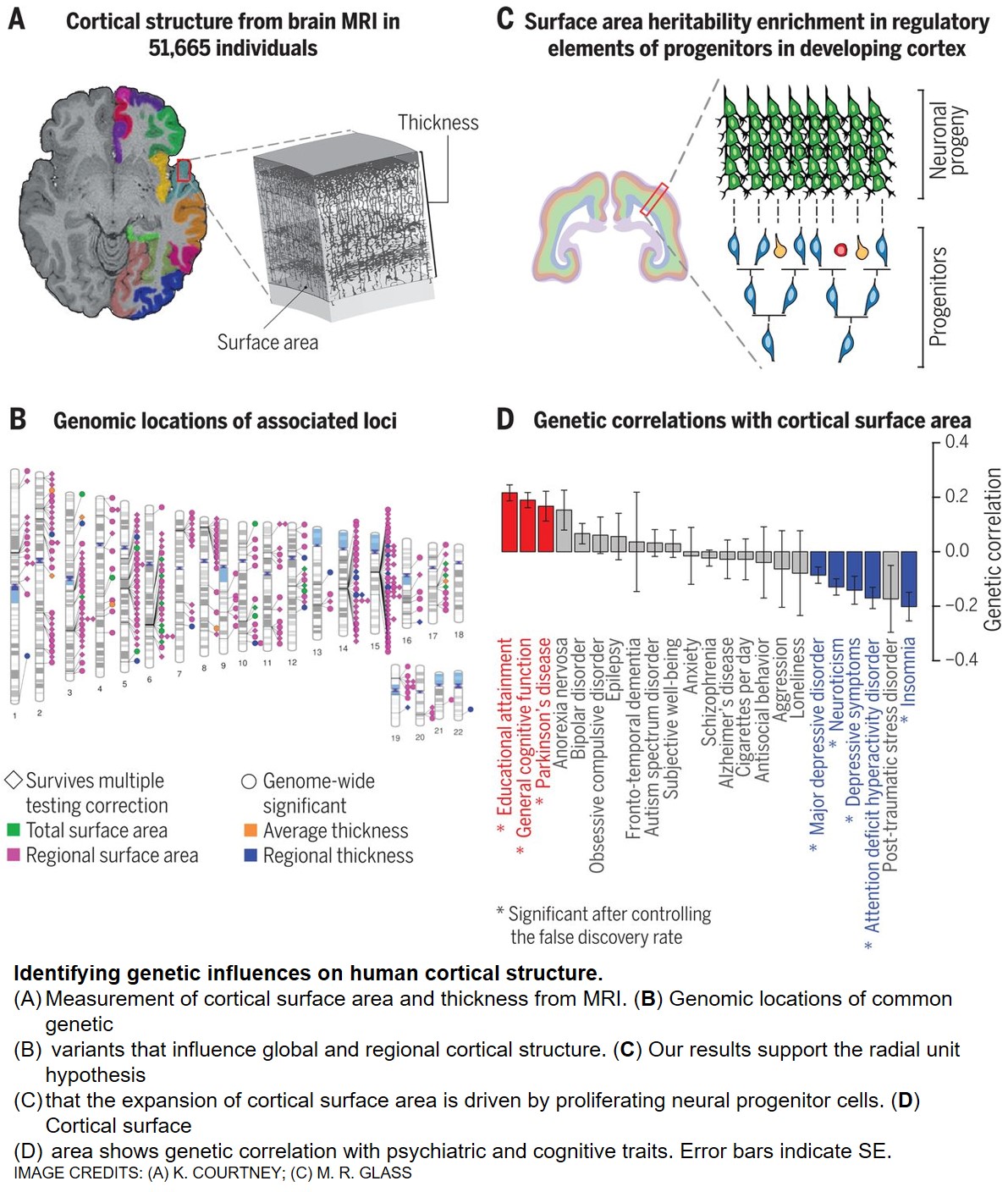 The cerebral cortex is the relatively thin, folded, outer "gray matter" layer of the brain crucial for thinking, information processing, memory, and attention. Not much has been revealed about the genetic underpinnings that influence the size of the cortex's surface area and its thickness, both of which have previously been linked to various psychiatric traits, including schizophrenia, bipolar disorder, depression, attention deficit hyperactivity disorder (ADHD), and autism.

Now, for the first time, more 360 scientists from 184 different institutions have contributed to a global effort to find more than 200 regions of the genome and more than 300 specific genetic variations that affect the structure of the cerebral cortex and likely play important roles in psychiatric and neurological conditions.

The study was published in the journal Science.The researchers studied MRI scans and DNA from more than 50,000 people to identify 306 genetic variants that influence brain structure in order to shed light on how genetics contribute to differences in the cerebral cortex of individuals. Genetic variants or variations are simply the slight genetic differences that make us unique. Generally speaking, some variants contribute to differences such as hair color or blood type. Some are involved in diseases.

Most of the millions of genetic variants, though, have no known significance. This is why pinpointing genetic variants associated with cortex size and structure is a big deal. Stein and colleagues consider their new genetic roadmap of the brain a sort of "Rosetta stone" that will help translate how some genes impact physical brain structure and neurological consequences for individuals.

Among the findings of the research published in Science:

"Most of our previous understanding of genes affecting the brain are from model systems, like mice," one of the senior authors said. "With mice, we can find genes, knock out genes, or over express genes to see how they influence the structure or function of the brain. But there are a couple of problems with this."

One problem is, quite simply, a mouse is not a human. There are many human-specific features that scientists can only study in the human brain.

Genes contain DNA, the basic human code that, when translated into action, creates proteins that "do" things, such as help your finger muscles type or your heart beat or your liver process toxins. But only about 3 percent of the human genome codes for proteins. The vast majority of the human genome is called the noncoding genome. Much of this region is not shared between mice and humans. This noncoding genome consists of tiny molecular switches that can modulate the expression of other genes. These switches don't directly alter the function of a protein, but they can affect the amounts of a protein that is expressed. Turns out, most genetic variants associated with psychiatric disorders are found in the noncoding region of the genome.

These findings can now be a resource for scientists to help answer important questions about the genetic influences on the brain and how they relate to numerous conditions.

Visual stress could be a symptom of Chronic Fatigue Syndrome

How can I tell if she's lying?