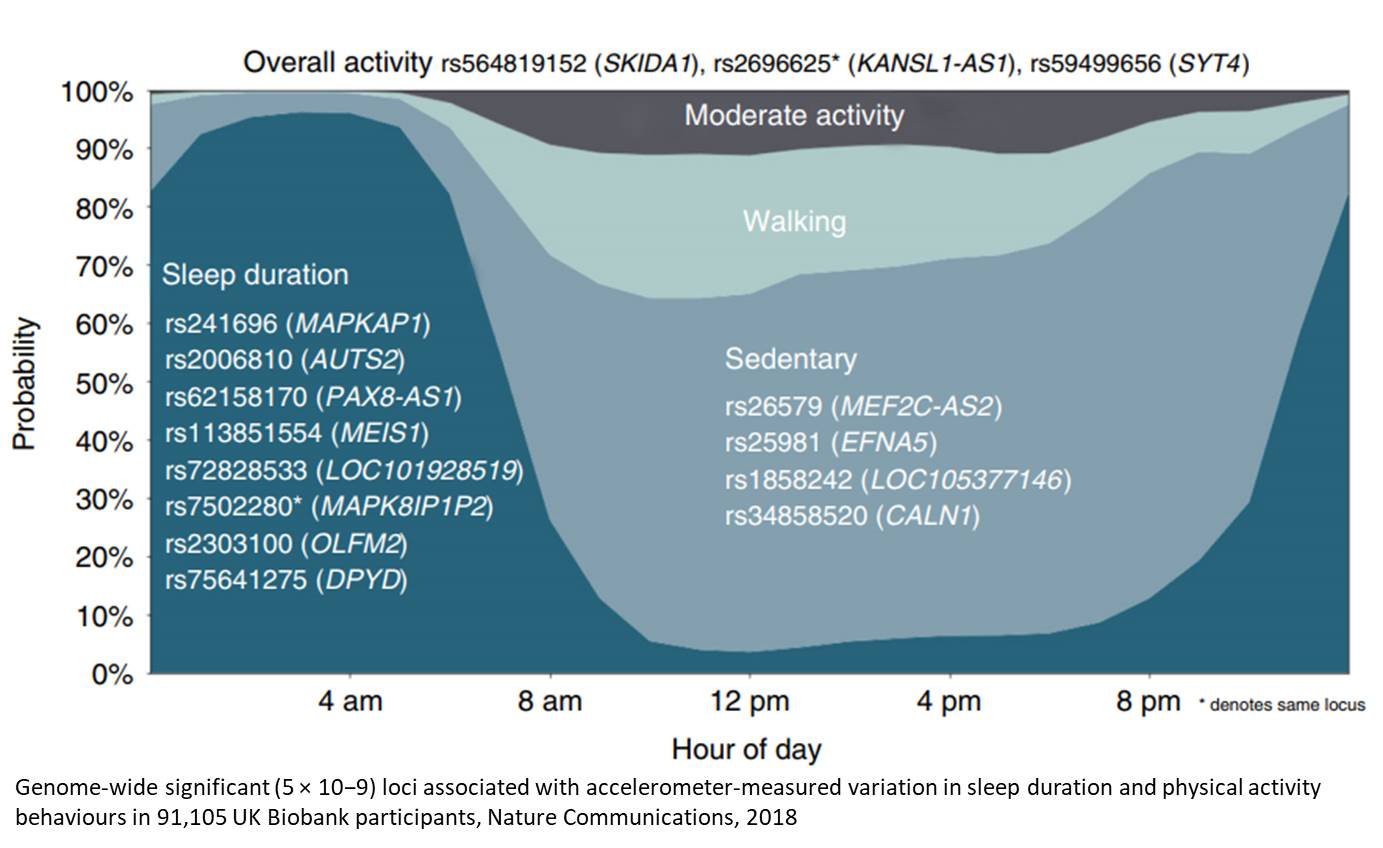 Time spent sitting, sleeping and moving is determined in part by our genes, researchers have shown.

In one of the most detailed projects of its kind, the scientists studied the activity of 91,105 UK Biobank participants who had previously worn an activity monitor on their wrist for a week.

The scientists taught machines to automatically identify active and sedentary life from the huge amounts of activity monitor data. They then combined this data with UK Biobank genetic information to reveal 14 genetic regions related to activity, seven new to science, they report in Nature Communications.

These loci account for 0.06% of activity and 0.39% of sleep duration variation. Genome-wide estimates of ~ 15% phenotypic variation indicate high polygenicity. Heritability is higher in women than men for overall activity (23 vs. 20%, p = 1.5 × 10−4) and sedentary behaviors (18 vs. 15%, p = 9.7 × 10−4). Heritability partitioning, enrichment and pathway analyses indicate the central nervous system plays a role in activity behaviors.

The work paves the way for better understanding of sleep, physical activity, and their health consequences. Further analysis of the human genetic data showed for the first time that increased physical activity causally lowers blood pressure.

Physical inactivity is a global public health threat and is associated with a range of common diseases including obesity, diabetes and heart disease. Changes in sleep duration are linked to heart and metabolic diseases and psychiatric disorders.

The study lead said: "How and why we move isn't all about genes, but understanding the role genes play will help improve our understanding of the causes and consequences of physical inactivity. It is only by being able to study large amounts of data, such as those provided by UK Biobank, that we are able to understand the complex genetic basis of even some of the most basic human functions like moving, resting and sleeping."

The use of machine learning in big healthcare datasets is advancing quickly, and having a profound effect on the sorts of studies that can be carried out, one of the lead analysts of the study said. "We have carefully developed machine learning models to teach machines how to analyse complex functions like activity,"the author said. "These models provide exciting new insights into human movement behaviours in large studies such as UK Biobank with its half a million participants."

To help identify the types of activity recorded on the wrist monitors, the researchers turned to 200 volunteers who wore a special camera that captured their activity every 20 seconds over two days. The images were compared with the activity data captured by the wrist worn monitors, providing a guide to interpreting the data.