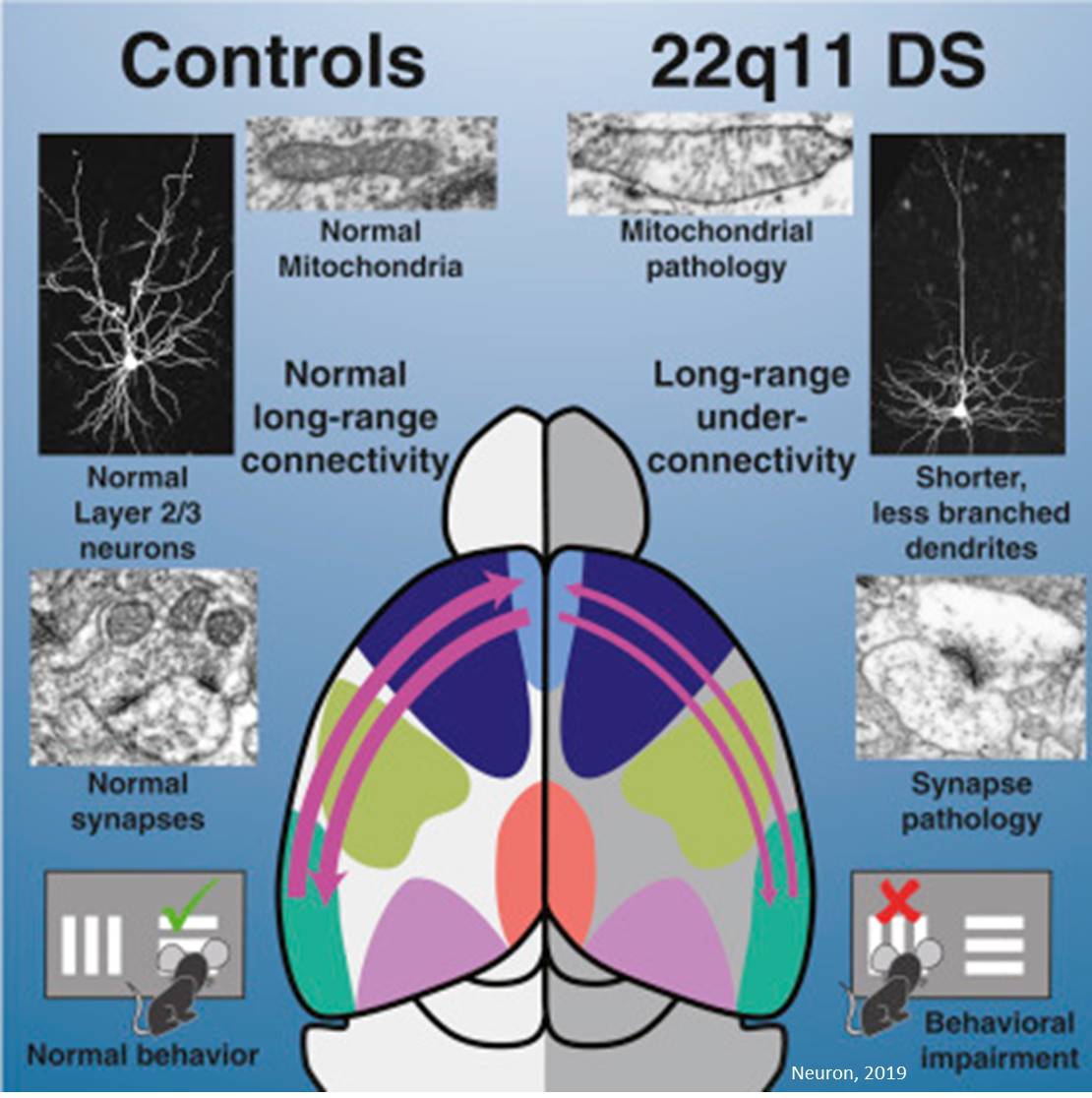 Under-connectivity, or too few connections in the brain, is the underlying cause of brain disorders like autism and schizophrenia, according to a recent study from investigators. The study, published in Neuron, provides the first evidence showing that individual nerve cells fail to make the right number of connections. The reason for this deficit is limited growth of key nerve cells in the cerebral cortex during early development, due to both genetics and mitochondrial dysfunction.

Working in models of DiGeorge/22q11 Deletion Syndrome -- a common disorder with the highest known genetic association with diseases like schizophrenia and autism -- the group defined the disruptions of cell and molecular functions that lead to altered development of nerve cells and their connections in the cerebral cortex. They associated these changes with behavioral deficits linked to neurodevelopmental disorders. This work confirms, for the first time, a well-known clinical hypothesis that under-connectivity is the basis of these disorders.

The work from the research team also showed that cortical under-connectivity and cognitive impairment are linked to genes that cause mitochondrial dysfunction in DiGeorge/22q11 Deletion Syndrome. When mitochondrial function is restored through antioxidant therapy, so are cortical connections and behavioral deficits.

"The good news is that mitochondrial deficits are very treatable pharmacologically or through diet" said senior author. "Our research holds up the possibility that in some instances, children who are diagnosed with neurological disorders may have genetic deficits that lead to a final common pathway of focal metabolic disruption -- ultimately, this is treatable."

Using a DiGeorge/22q11 Deletion Syndrome mouse model, the research team first sought to confirm that under-connectivity, not over-connectivity, underlies behavioral deficits. They found that the integrity and efficiency of synapses in the cortex were diminished. The team then looked at the cells making the connections. They found the cells were unhealthy due to dysfunctional mitochondria, long known to be the powerhouse of the cell.

The research team then tested the theory that mitochondria in these cells might be dysfunctional due to increased reactive oxygen species -- oxygen molecules that roam freely through cells and cause extensive damage. Finally, the team used antioxidant therapy to neutralize these dangerous oxygen "free radicals" to help restore mitochondrial function. This therapy not only fixed connectivity, but fixed the behavioral deficits that happened as a result.

The team then looked at the 28 genes on chromosome 22 for which one of two copies is lost in individuals with DiGeorge/22q11 Deletion Syndrome. They focused on six of these 28 genes associated with mitochondria. They identified the Txrnd2 gene, which encodes an enzyme that neutralizes reactive oxygen in mitochondria, as a critical player in the growth and connectivity of the cortical cells that are under-connected.

"This is one of the first times that any group has gone from genetic mutation, to cell biological pathology, to behavioral consequences, and then to safe, effective therapy that corrects both the pathology and behavioral impairment in a valid animal model of any neurodevelopment disorder," said the senior author.