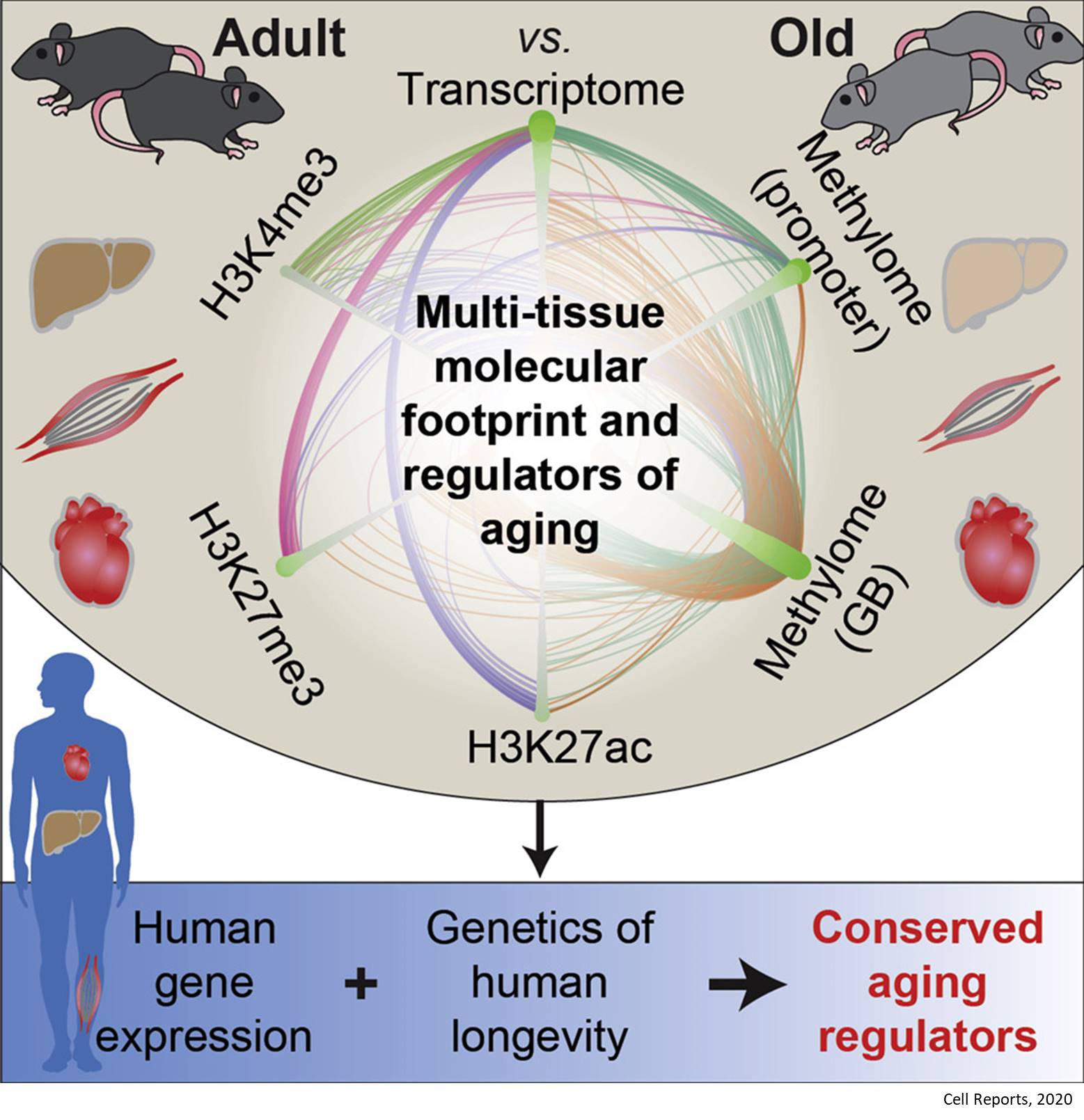 Time may be our worst enemy, and aging its most powerful weapon. Our hair turns grey, our strength wanes, and a slew of age-related diseases represent what is happening at the cellular and molecular levels. Aging affects all the cells in our body's different tissues, and understanding its impact would be of great value in fighting this eternal enemy of all ephemeral life forms.

The key is to first observe and measure. In a paper published in Cell Reports, scientists started by asking a simple question: how do the tissues of aging mice differ from those of mice that are mere adults?

To answer the question, the researchers used the multiple techniques to measure the expression of every one of the thousands of mouse's genes, and to identify any underlying epigenetic differences. The researchers not only measured different layers of information, but they did it across three different tissues: liver, heart, and muscle.

The data collectively allowed them to define an aging "footprint" that can serve as a field for investigation. But while many of the known aging manifestations were recovered, different tissues behaved differently.

"We will never have a thorough understanding of aging by studying a single tissue, and this applies to many other processes and diseases," says lead author. "Data, whether freshly produced or reused, is the key to understanding complex systems, and we are just scratching the surface."

Through multiple bioinformatics analyses, the scientists identified certain genes and proteins that may be controlling the complex aging process. They measured changes in the transcriptome, histone modifications, and DNA methylome in three metabolic tissues of adult and aged mice. Transcriptome and methylome changes dominate the liver aging footprint, whereas heart and muscle globally increase chromatin accessibility, especially in aging pathways.

By including human population data, they also showed that many of the "players" they identified in the mouse genome may be also relevant in human aging. In mouse and human data from multiple tissues and regulatory layers, age-related transcription factor expression changes and binding site enrichment converge on putative aging modulators, including ZIC1, CXXC1, HMGA1, MECP2, SREBF1, SREBF2, ETS2, ZBTB7A, and ZNF518B.

Finally, the researchers used human genetic data to show that some of the "players" may also explain why some humans live longer than others. Using Mendelian randomization, they establish possible epidemiological links between expression of some of these transcription factors or their targets, including CXXC1, ZNF518B, and BBC3, and longevity.

"Our final goal is not to stop ageing, but to age better and disease-free, and to do that, we will need to characterize this system," says the author. "This is a perfect example of cross-species integration starting from the laboratory mouse and ending in human population data that takes us one step closer to understanding one of the most complex processes in biology."