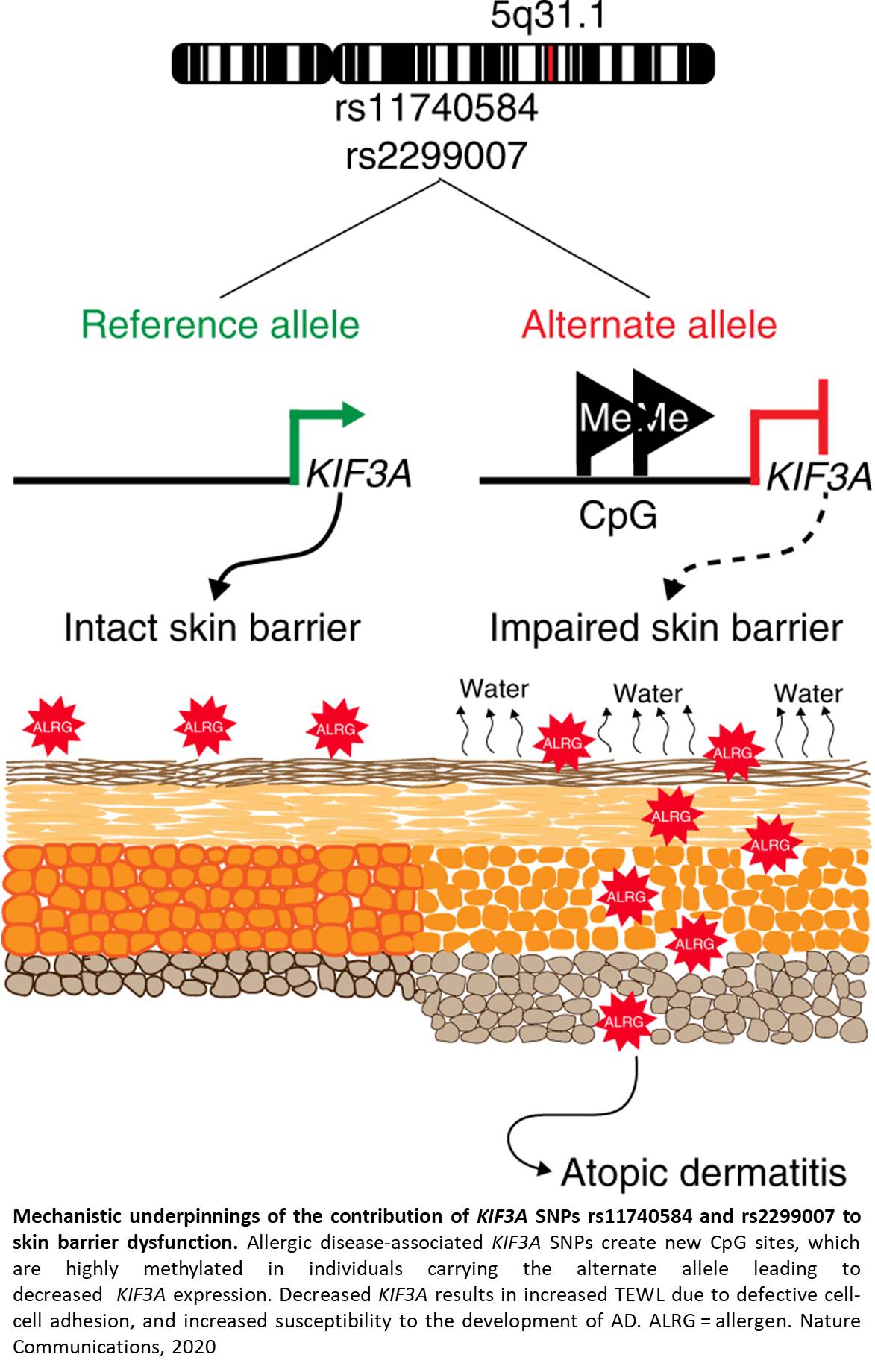 New research supported by the National Institutes of Health delineates how two relatively common variations in a gene called KIF3A are responsible for an impaired skin barrier that allows increased water loss from the skin, promoting the development of atopic dermatitis, commonly known as eczema. This finding could lead to genetic tests that empower parents and physicians to take steps to potentially protect vulnerable infants from developing atopic dermatitis and additional allergic diseases.

Atopic dermatitis is an inflammatory skin condition that affects up to 20% of children in developed countries. This chronic disease is characterized by dry, thickened and intensely itchy skin, particularly in skin folds. People with eczema are more susceptible to bacterial, viral and fungal skin infections and frequently develop additional allergic diseases such as asthma.

KIF3A is a gene that codes for a protein involved in generating signals from the outside to the inside of a cell, part of a complex sensory apparatus. Previously, scientists had identified an association between two genetic variations in KIF3A and asthma in children who also had eczema. In the new study, the researchers found that these variations, or single nucleotide polymorphisms (SNPs), changed parts of the KIF3A gene to a form that can regulate, through a process called methylation, the rate at which a gene is transcribed into the blueprint for protein production.

The investigators confirmed that skin and nasal-lining cells from people with the KIF3A SNP variants had more methylation and contained fewer blueprints for the KIF3A protein than cells in which KIF3A lacked the SNPs. In addition, the researchers demonstrated that people with the SNP-created regulating sites had higher levels of water loss from the skin.

To determine whether lower levels of KIF3A caused atopic dermatitis, the scientists studied mice lacking the mouse version of KIF3A in skin cells. They found that these mice also had increased water loss from the skin due to a dysfunctional skin barrier and were more likely to develop features of atopic dermatitis. The investigators concluded that the presence of either or both of the two SNPs in human KIF3A leads to lower production of the KIF3A protein, promoting dysfunction of the barrier that normally keeps skin well hydrated, thereby increasing the likelihood that a person will develop atopic dermatitis.

Now that investigators have established that these KIF3A SNPs increase the risk for atopic dermatitis, infants could potentially be screened for them. Therapies directed specifically at water loss from the skin, such as intensive topical moisturization regimens, could be evaluated for their ability to prevent atopic dermatitis in children with the SNPs. Preventing atopic dermatitis in early childhood could in turn prevent a cascade of additional allergic diseases later in life, such as asthma, food allergy and allergic rhinitis--a cascade known as the atopic march.