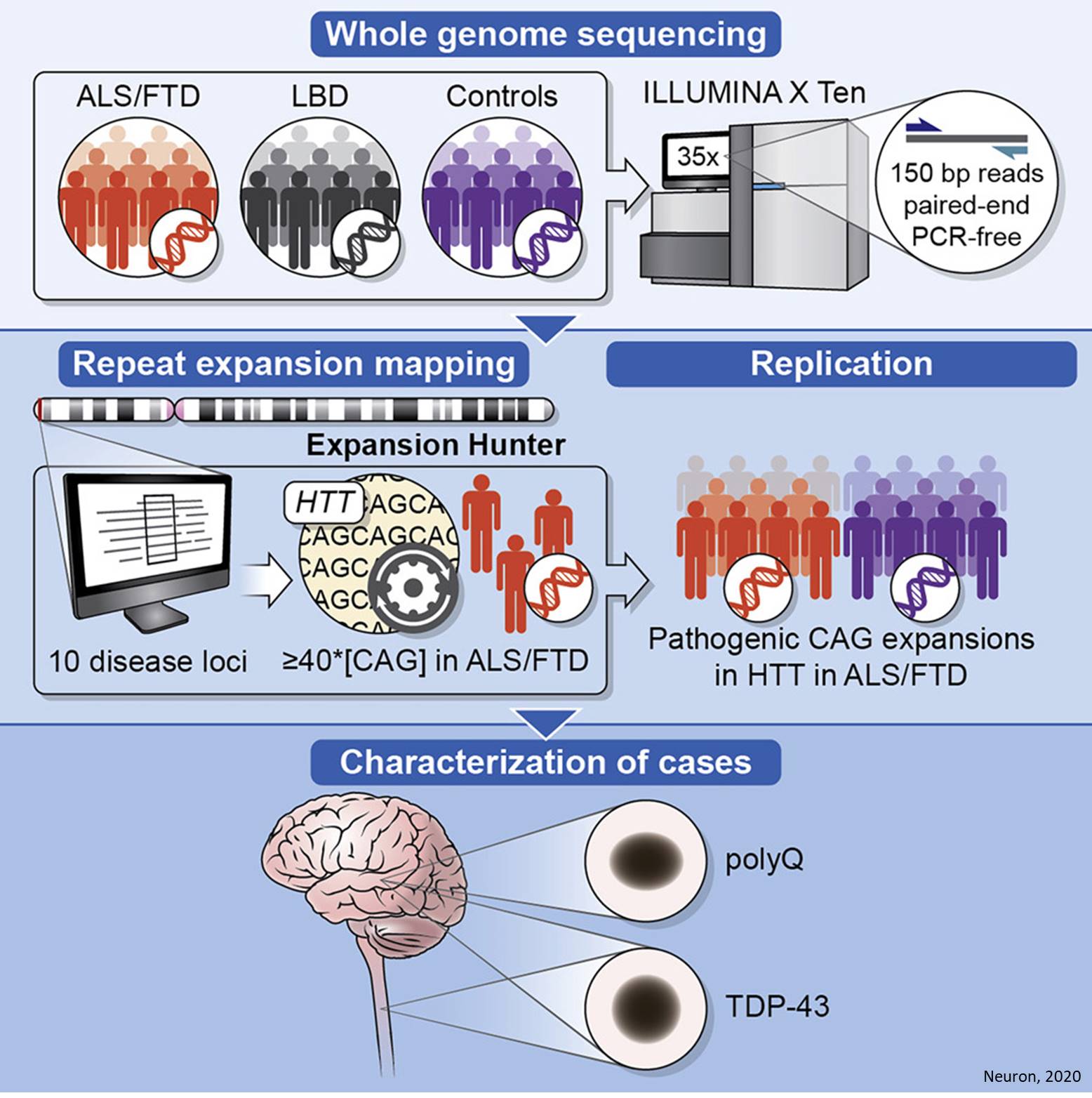 A study has made a surprising connection between frontotemporal dementia (FTD) and amyotrophic lateral sclerosis (ALS), two disorders of the nervous system, and the genetic mutation normally understood to cause Huntington's disease.

This large, international project opens a potentially new avenue for diagnosing and treating some individuals with FTD or ALS.

Several neurological disorders have been linked to "repeat expansions," a type of mutation that results in abnormal repetition of certain DNA building blocks. For example, Huntington's disease occurs when a sequence of three DNA building blocks that make up the gene for a protein called huntingtin repeats many more times than normal. These repeats can be used to predict whether someone will develop the illness and even when their symptoms are likely to appear, because the more repeats in the gene, the earlier the onset of disease.

"It has been recognized for some time that repeat expansion mutations can give rise to neurological disorders," said the senior author. "But screening for these mutations throughout the entire genome has traditionally been cost-prohibitive and technically challenging."

Taking advantage of technology available at NIH, the researchers screened the entire genomes from large cohorts of FTD/ALS patients and compared them to those of age-matched healthy individuals. While several patients had a well-established genetic marker for FTD/ALS, a small subset surprisingly had the same huntingtin mutation normally associated with Huntington's disease. Remarkably, these individuals did not show the classical symptoms of Huntington's but rather those of ALS or FTD.

"None of these patients' symptoms would have clued their physicians into thinking that the underlying genetic cause was related to the repeat expansion we see in Huntington's disease," said the author.

The author continued by explaining that whole genome sequencing is changing how neurological patients can be diagnosed. Traditionally, this has been based on which disease best fit the overall symptoms with treatment aimed at managing those symptoms as best as possible. Now, clinicians can generate genetically defined diagnoses for individual patients, and these do not always align with established symptom-based neurological conditions.

"Our patients simply don't match a textbook definition of disease when it comes to which mutation produces which symptoms. Here we have patients carrying a pathogenic huntingtin mutation but who present with FTD or ALS symptoms," said the author.

One implication of these findings is that, if successful, these therapies could be applied to the small subset of FTD and ALS patients with that mutation as well. The researchers note that, while the number of FTD/ALS patients seen with the Huntington's-linked mutation is small (roughly 0.12-0.14%), adding genetic screening for the mutation to the standard diagnostic procedure for patients showing symptoms of FTD or ALS should be considered.

"Because gene therapy targeting this mutation is already in advanced clinical trials, our work offers real hope to the small number of FTD and ALS patients who carry this mutation," said the senior investigator. "This type of large-scale international effort showcases the power of genomics in identifying the molecular causes of neurodegenerative diseases and paves the way for personalized medicine."