Manganese deficiency implicated in back bone curve (scoliosis) in children 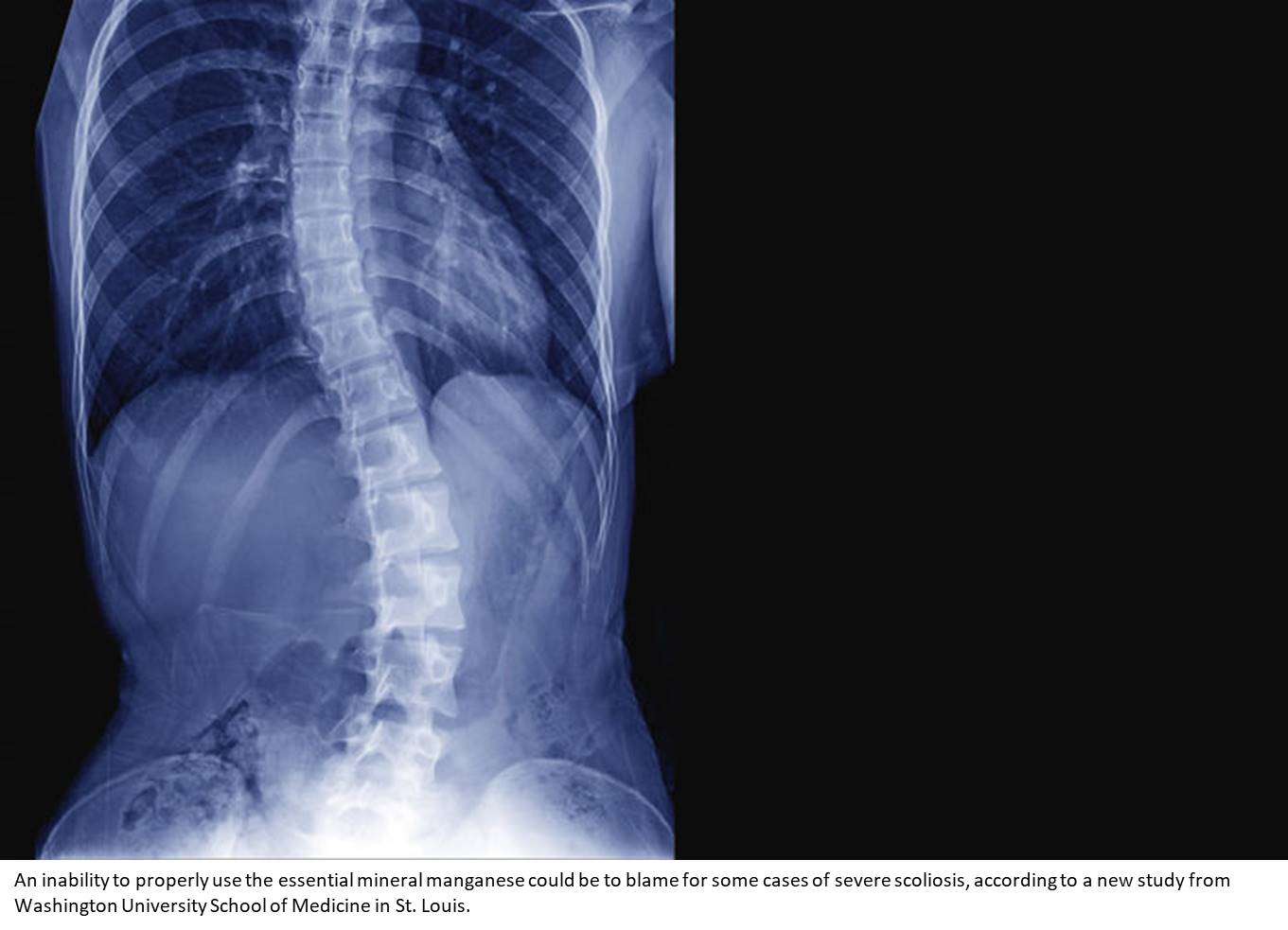 Nobody knows why some children's backs start to curve to one side just as they hit puberty. Most children diagnosed with scoliosis, or curvature of the spine, have no known risk factors.

A new study suggests that the body's inability to fully utilize the essential dietary mineral manganese might be to blame for some cases of severe scoliosis. Researchers have found that children with severe scoliosis are twice as likely as children without the disease to carry a gene variant that makes it hard for their cells to take in and use manganese. Manganese is required for growing bones and cartilage.

Our study links a common disease - scoliosis - to something that's potentially modifiable in the diet," said senior author. "But we don't want people to go out right now and start manganese supplements, because we already know that too much manganese can be harmful." The study is published in Nature Communications.

About 3 million new cases of scoliosis are diagnosed every year. Most are mild and require only that doctors keep a watchful eye on the condition. Children who develop a moderate bend to their spine may need to wear a back brace until they finish growing. In rare cases, the curvature is so pronounced that it requires surgery to correct.

Cases of scoliosis tend to cluster in families, but not in a simple way, which suggests that many different genes each play a small role in increasing the risk of the disease. To identify such genes, a research team scanned all the genes in 457 children with severe scoliosis and 987 children without scoliosis.

When the researchers bred zebrafish with a disabled SLC39A8 gene, the fish developed movement and skeletal abnormalities, including curves in their spines.

This gene hasn't been studied much, but there are some reports that it helps cells take in minerals such as zinc, iron and manganese. The authors found that human cells with the gene variant successfully took up zinc and iron but failed to take in manganese. They also discovered that children with the gene variant had significantly lower levels of manganese in their blood than those with the more common form - although both groups were still within the normal range.

"Our goal in studying the genetics of this disorder was to see if there was anything we could learn that might change how we treat patients," said the senior author. "And we came across this gene variant that affects the level of manganese in the body. That tells me maybe we should start thinking about studying nutritional treatments for some children at risk."

Manganese is both an essential mineral and a toxin. High doses can cause manganism, a permanent neurological condition characterized by tremors and difficulty walking, as well as psychiatric symptoms such as aggression and hallucinations. The mineral also has been linked to Parkinson's disease, schizophrenia and high blood pressure. Too little manganese, on the other hand, can cause manganese deficiency - although this is rarely seen in people because the human body needs only trace amounts that are easily obtained from food. But animal studies show that lack of manganese can result in problems metabolizing fat and sugar, impaired growth, difficulty walking and curvature of the spine.

The children with the genetic variant did not have manganese deficiency, but they may be unable to use manganese as efficiently as others.

The genetic variant does not stop the gene from working entirely, it's just not working optimally," the author said. "So maybe most people need a certain level of manganese in their blood, but if you have a bad gene variant like this one, you need more."

Any manganese supplementation would have to be carefully measured to avoid raising the risk for other serious diseases, the researchers cautioned.