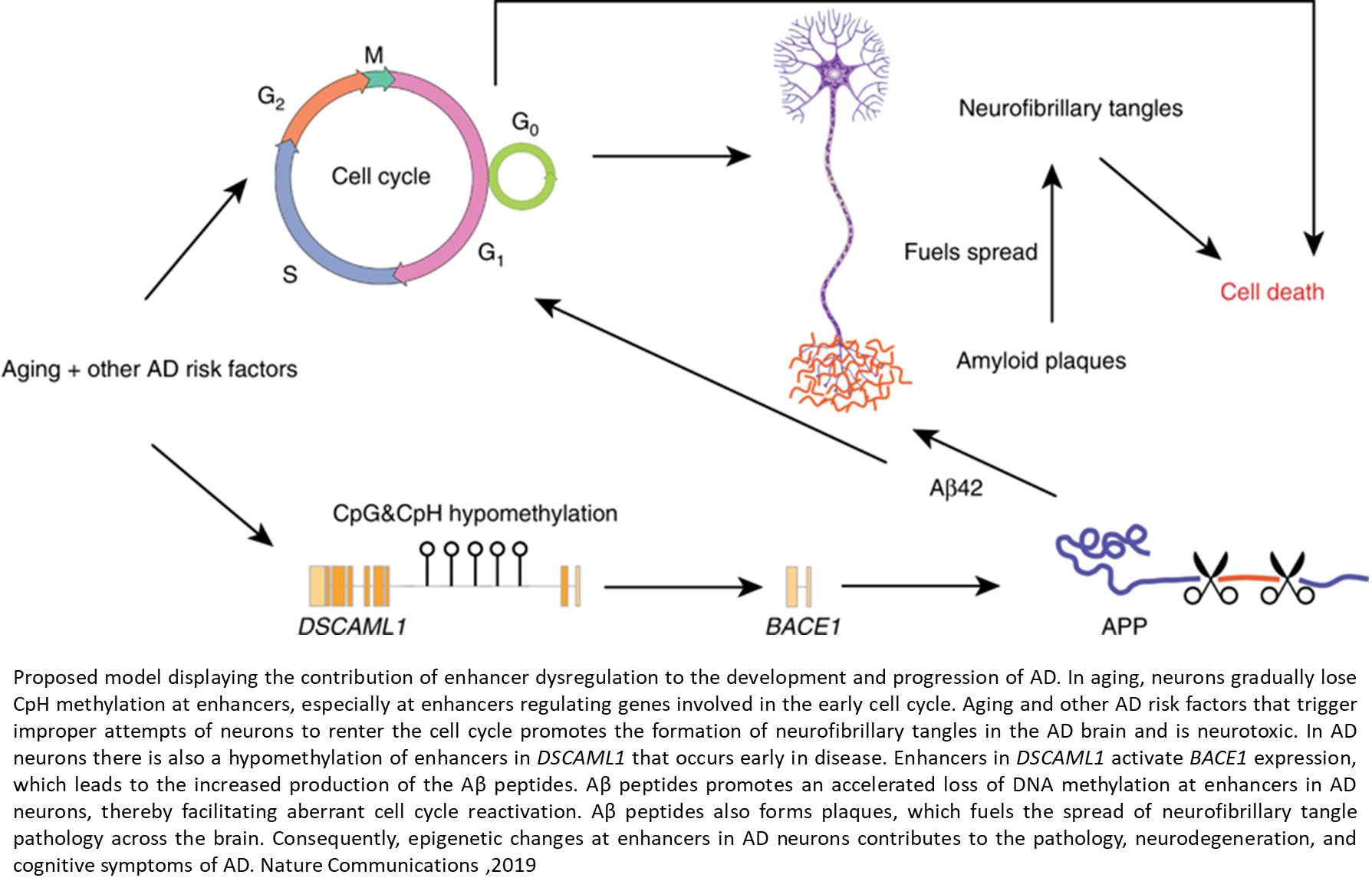 Scientists have identified a new mechanism that accelerates aging in the brain and gives rise to the most devastating biological features of Alzheimer's disease.

The findings also unify three long-standing theories behind the disease's origins into one cohesive narrative that explains how healthy cells become sick and gives scientists new avenues for screening compounds designed to slow or stop disease progression, something existing medications cannot do.

"We now have a better understanding of the molecular factors that lead to Alzheimer's disease, which we can leverage to develop improved and desperately needed treatment and prevention strategies," said the senior author of the study, which appears in the in Nature Communications. "Alzheimer's is a major growing public health problem around the world. We need better options for patients and we need them soon."

The findings center on genetic "volume dials" called enhancers, which turn the activity of genes up or down based on influences like aging and environmental factors. The researchers took a comprehensive look at enhancers in brain cells of people at varying stages of Alzheimer's and compared them to the cells of healthy people. The authors specifically identify 1224 differentially methylated enhancer regions; most of which are hypomethylated at CpH sites in AD neurons. CpH methylation losses occur in normal aging neurons, but are accelerated in AD. Integration of epigenetic and transcriptomic data demonstrates a pro-apoptotic reactivation of the cell cycle in post-mitotic AD neurons.

At the same time, these enhancers over-activate a suite of genes involved in Alzheimer's pathology in brain cells, spurring the formation of plaques and tangles, and reactivating the cell cycle in fully formed cells -- a highly toxic combination.

Mechanistically AD neurons have a large cluster of significantly hypomethylated enhancers in the DSCAML1 gene that targets BACE1. Hypomethylation of these enhancers in AD is associated with an upregulation of BACE1 transcripts and an increase in amyloid plaques, neurofibrillary tangles, and cognitive decline.

"In adults, brain cells typically are done dividing. When enhancers reactivate cell division, it's incredibly damaging," the author said. "The enhancer changes we found also encourage the development of plaques, which act as gasoline for the spread of toxic tangles, propagating them through the brain like wildfire. Taken together, enhancer abnormalities that promote plaques, tangles and cell cycle reactivation appear to be paving the way for brain cell death in Alzheimer's disease."

Importantly, the scientists linked enhancer changes to the rate of cognitive decline in Alzheimer's patients.

The study is the first comprehensive investigation of enhancers in human brain cells and in Alzheimer's disease, and included in-depth analysis of epigenetic, genetic, gene expression and protein data.

Next, the team plans to develop new experimental systems to screen compounds that may fix dysregulation in enhancers and that have potential as new treatments or preventative measures.