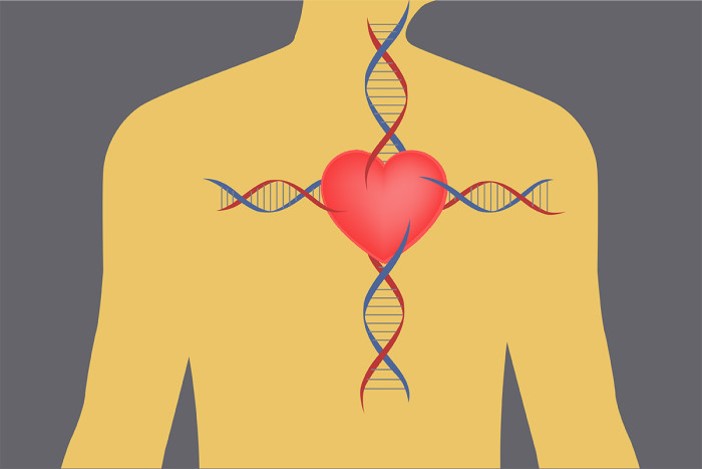 A new New England Journal of Medicine study that included genetic data from more than 190,000 people has identified two genes that, when altered in specific ways, either promote or undermine cardiovascular health.

To identify genes that might be relevant for drug discovery, the investigators plumbed DNA data from patients with coronary disease and from healthy controls. They searched across more than 220,000 genetic variants that altered proteins to identify those that appeared to influence heart disease risk. Errors in proteins can have major physiologic consequences.

As part of the study, the researchers confirmed past work identifying genes already shown to confer an advantage or a vulnerability in protecting against heart disease risk, and they implicated two new ones -- ANGPTL4 and SVEP1. Rare errors in ANGPTL4 were associated with reduced risk of coronary artery disease. The reduction varied from 14 percent for a small error in the gene to cutting risk by about 50 percent when an entire copy of the gene was disabled. The other gene, SVEP1, showed the opposite correlation -- a rare error increased risk of coronary artery disease by about 14 percent.

While ANGPTL4 has been the subject of much study, the other gene newly implicated in cardiovascular health is a bit of a mystery. In the new study, Stitziel and his colleagues showed that the error in SVEP1 also was linked to higher blood pressure in their study populations, but beyond that there are few clues to what it's doing.

In contrast, ANGPTL4 has long been known to play a role in processing triglycerides, a type of fat that circulates in the bloodstream. Doctors measure levels of triglycerides as a marker of heart disease risk, though whether these fats play a role in causing plaque to build up in arteries historically has been a matter of debate. ANGPTL4's role in processing triglycerides is part of a system called the lipoprotein lipase (LPL) pathway. Blocking ANGPTL4 actually opens up this pathway, allowing the body to process triglycerides from the diet and get them out of the bloodstream.

In people with a disabled copy of ANGPTL4, triglyceride levels in the blood are reduced by about 35 percent compared with people who have two working copies of the gene. Stitziel also pointed out that variations in the gene were not associated with changes in levels of "bad" LDL cholesterol. So any drug that impacts this pathway would, in theory, work independently of statins as well as PCSK9 inhibitors, a new and potent cholesterol-lowering therapy that was approved in 2015 by the Food and Drug Administration.