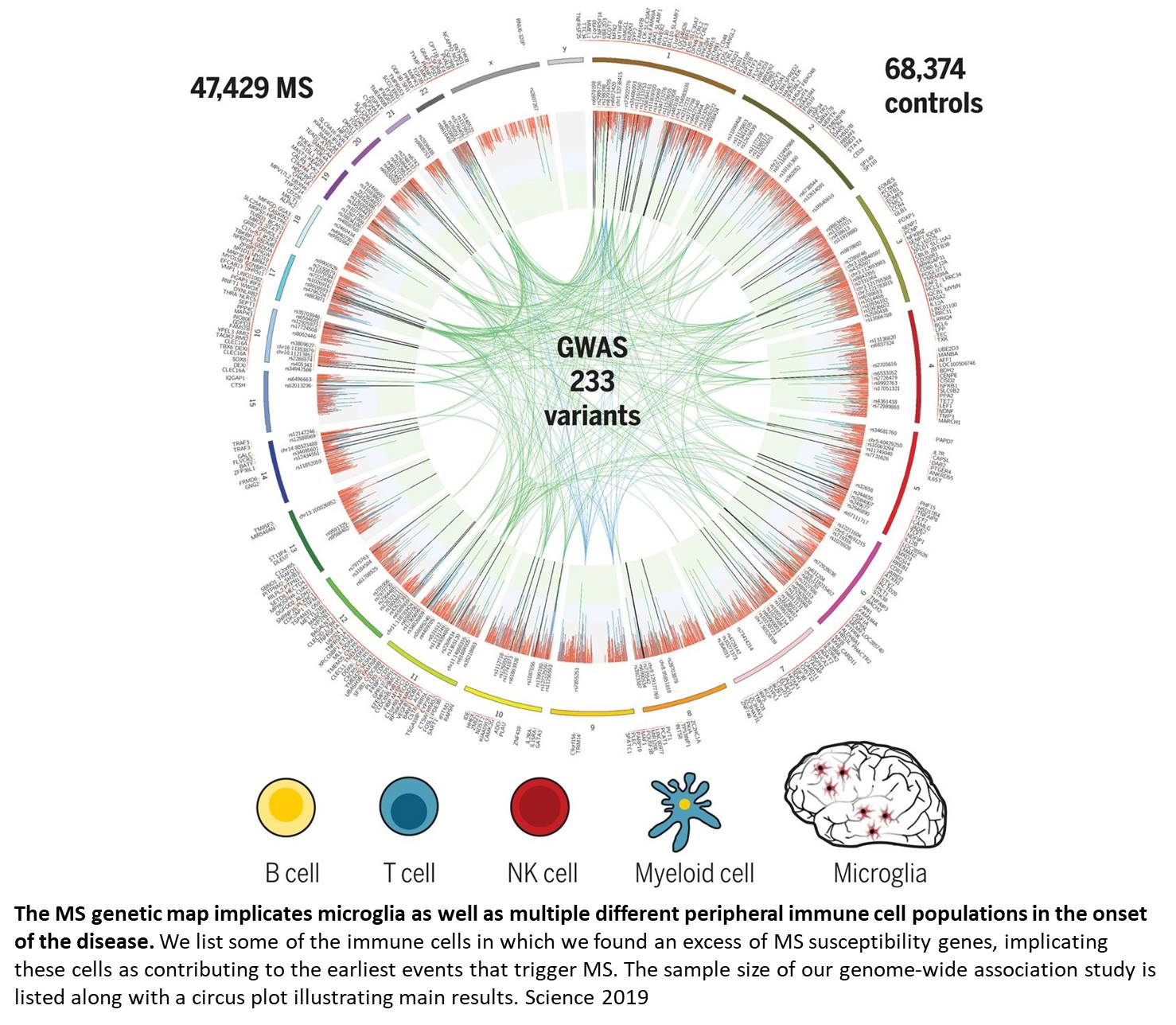 The International Multiple Sclerosis Genetic Consortium (IMSGC) reports the results of its latest study, "Multiple sclerosis genomic map implicates peripheral immune cells and microglia in susceptibility", in the journal Science: the highly productive collaborative group presents a new milestone in its efforts to understand the genetic basis of multiple sclerosis (MS). In a study of 115,803 individuals, the authors have identified 233 sites or loci in the human genome that contribute to the onset of MS. This is the largest study to date in MS and is based on the generous contribution of genetic material from 47,429 MS patients and 68,374 healthy individuals.

The authors used an ensemble of methods to prioritize 551 putative susceptibility genes that implicate multiple innate and adaptive pathways distributed across the cellular components of the immune system. Using expression profiles from purified human microglia, they observed enrichment for MS genes in these brain-resident immune cells, suggesting that these may have a role in targeting an autoimmune process to the central nervous system, although MS is most likely initially triggered by perturbation of peripheral immune responses.

The study's results confirm earlier results and offer a rich new perspective on the molecular events that lead some individuals to develop MS: it appears that dysfunction of many different immune cell types, both in the peripheral blood and the brain, contribute to triggering a cascade of events that ultimately leads to brain inflammation and neurodegeneration.

The principal investigator of the study says that "the study has created a detailed genetic map of MS, identifying over two hundred regions of the human genome that influence a large number of different immune cells, highlighting the fact that this disease is not caused by a single immune cell type but rather by a broad dysfunction of the immune system." MS has an initial inflammatory component and a secondary neurodegenerative component, so the investigative team looked closely at available data from human brain to assess whether changes in brain cells contribute to the onset of MS. Until now, it appeared that immune cells found in blood that come from the bone marrow played a critical role; the new study confirms this but also implicates microglia, the immune cells that live in the human brain. However, there is little evidence that other brain cells such as neurons that carry electrical signals in the brain are implicated in triggering MS.

This study is an important milestone in identifying which genetic variants play a role in triggering MS, but it unfortunately does not clarify why some MS patients have a more severe course than others. The IMSGC is pursuing that question in other projects. The results of this project will impact most the development of clinical algorithms to manage individuals at risk of developing MS and the development of treatments for preventing MS. All current treatments aim to stop the inflammation after it has already started, so the study of MS genetics has opened a unique perspective on the earliest events that lead to the disease and that can now be targeted by drug-development efforts.