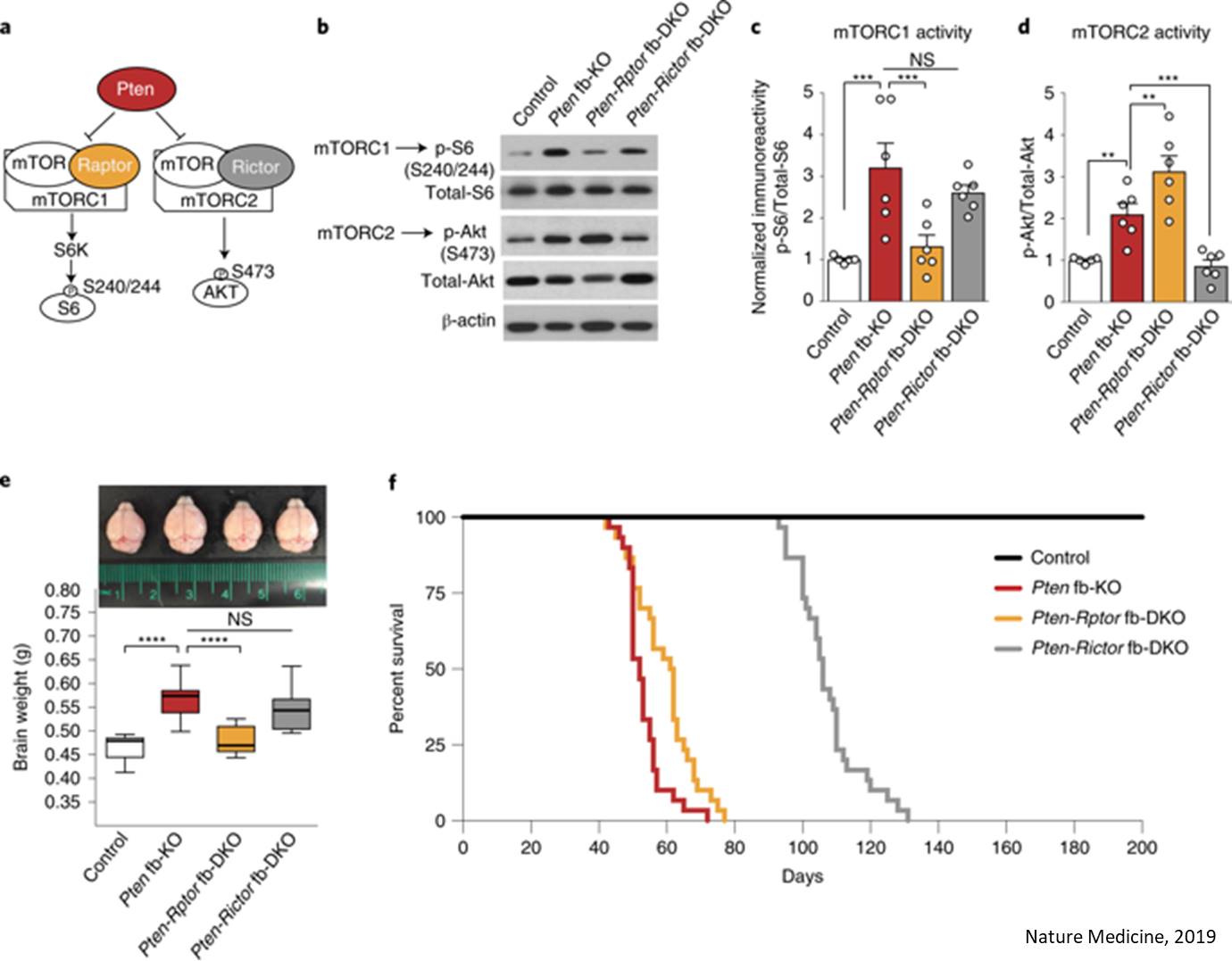 Autism is a developmental disorder that affects 1 in 59 children in the U.S. Mutations in specific genes, such as PTEN, can explain many autism cases. While children with mutations in PTEN exhibit autism, macrocephaly (an abnormally large skull), intellectual disability and epilepsy, there are currently no effective treatment options for children affected by this condition. But a new study offers a potential new approach to therapy.

Published in Nature Medicine, the study showed that a previously unexplored pathway goes awry in the brain of PTEN-deficient mice, and its restoration reverses their behavioral and neurophysiological abnormalities. More importantly, the researchers developed a new therapeutic strategy to treat the symptoms associated with PTEN-deficiency in this mouse model.

Based largely on experiments with the drug rapamycin, it was widely believed that dysregulation of mTORC1 is responsible for the condition. However, the researchers suspected that this was not the entire story since mTORC2 activity was also dysregulated in individuals with mutations in PTEN.

The researchers worked with a model of this condition in which mice were genetically engineered to lack PTEN specifically in neurons, the nerve cells of the brain. PTEN-deficient mice present with macrocephaly, seizures, shorter lifespan, alterations in social behaviors as well as memory problems similar to those observed in patients with autism spectrum disorders.

The investigators used molecular genetics techniques to independently suppress mTORC1 and mTORC2 and determined how individual silencing of these complexes affected the neurological alterations. "The results were quite surprising because they went against the traditional view of the field," said the senior author.

"We found that genetically silencing the mTORC1 complex in PTEN-deficiency mice only resulted in restoration of the size of the brain. It did not affect survival, the behavioral alterations or even the number seizures. Unexpectedly, genetically silencing mTORC2 complex activity resulted in prolonged lifespan, suppressed seizures, rescue of long-term memory and reduced autism spectrum disorder-like behaviors," the senior author said.

Currently, there is no drug that could specifically inhibit mTORC2. Thinking of possible future clinical applications of these findings, the researchers developed an antisense oligonucleotide, a molecule that silences the activity of mTORC2 by preventing the synthesis of one of its defining components.

"Amazingly, when we administered a single injection of the anti-sense oligonucleotide, we were able to reverse the abnormal behaviors and reduce seizures in Pten-deficient mice," the first author said.'

These findings are important because research efforts have mainly been focused on developing drugs to modulate mTORC1. The authors found that brain size and behavior are regulated by different mTOR complexes and molecular processes. More importantly, they found that mTORC2 is the major driver of the behavioral and other neurological alterations in PTEN-deficient mice, and their findings suggest that modulation of mTORC2 activity is a promising therapeutic approach.

"For other conditions, like spinal muscular atrophy, anti-sense oligonucleotides have successfully been translated into the clinic. This opens the possibility that either this or drug-based therapeutic modulation of mTORC2 activity also could be developed into a promising strategy to treat neurological disorders in which mTORC2 activity is dysregualted," the senior author said.

Finally, mTOR signaling also is altered in other neurological disorders, including epilepsy, tuberous sclerosis, Fragile X syndrome and Alzheimer disease. Future experiments should determine whether mTORC2 also is the main mTOR complex implicated in these disorders.

Why some older adults remember better than others