Tauopathy in the young autistic brain 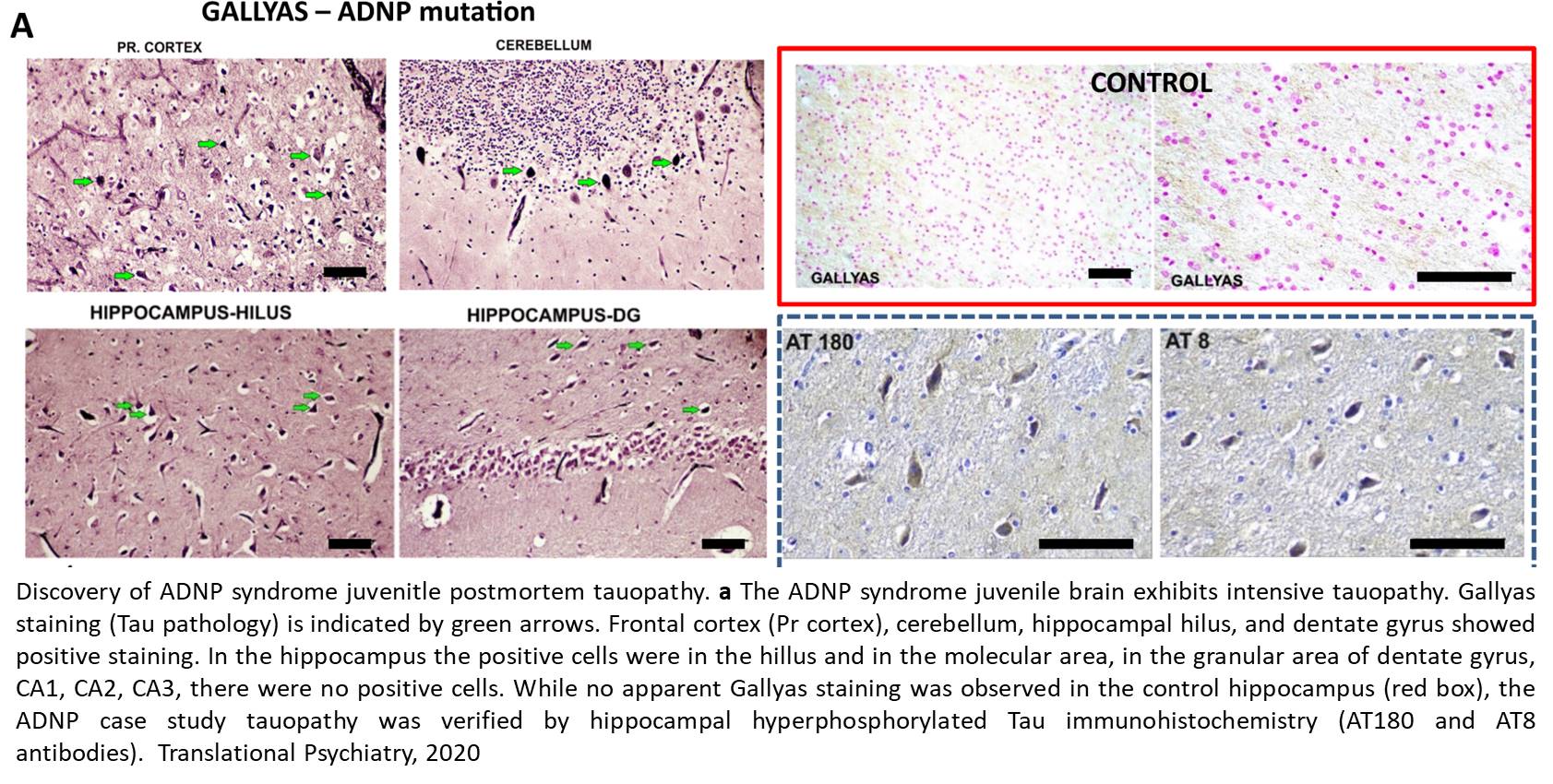 An extensive international study  found deposits of the tau protein typically found in Alzheimer's patients in tissues taken from the postmortem brain of a 7-year-old autistic child.

The child suffered from the ADNP syndrome, a mutation that causes a deficiency/malfunctioning of the ADNP protein essential for brain development. In light of these findings, the researchers tested an experimental drug called NAP, originally developed for Alzheimer's disease, on nerve cells in a model of ADNP syndrome with the mutation that induced Alzheimer's-like symptoms. The experiment was a success, with the damaged nerve-like cells returning to normal function. The study was published in the journal Translational Psychiatry.

The researchers then "treated" damaged nerve-like cells carrying an ADNP mutation similar to the deceased child's mutation with a drug candidate called NAP. "NAP is actually a short active fragment of the normal ADNP protein," says the senior author. "When we added NAP to the nerve cells carrying an ADNP mutation, the tau protein bound to the nerve cell skeleton properly, and the cells returned to normal function.

"The fact that NAP treatment has been successful in restoring the normal function of neuronal-like cell models with impaired ADNP raises hopes that it may be used as a remedy for ADNP syndrome and its severe implications, including autism," the senior author continues. "Moreover, because other genetic disorders related to autism are characterized by tau pathologies in the brain, we hope that those suffering from these syndromes will also be able to benefit from NAP treatment in the future."

NAP (also called CP201) has been classified as an "orphan drug" by the US Food and Drug Administration and is currently in the preparatory stages of a clinical trial in children with ADNP syndrome through the company Coronis Neurosciences.

In another phase of the study, the researchers sought to broaden their understanding of the effects of the mutation that causes ADNP syndrome. To do this, they extracted the genetic material mRNA (messenger RNA) from the tissues of the deceased child and performed an expression analysis of about 40 proteins in the same child, encoded by the mRNA. Full genetic sequencing was also performed to determine protein expression in white blood cells taken from three other children with ADNP syndrome.

An in-depth study was carried out on all of the data obtained in the genetic sequencing using advanced bioinformatics computational tools. The data were compared to online databases of protein expression data from healthy individuals, revealing a variety of characteristics that were common to the children with the syndrome but very different from the normal appearance of these proteins.

The senior author concludes that "the significance of these findings is that the mutation that causes ADNP syndrome damages a wide range of essential proteins, some of which bind to the tau protein, among other things, and impair its function as well. This creates various pathological effects in the brains and other tissues of children with ADNP syndrome, one of which is the formation of tau deposits, known to be a characteristic of Alzheimer's disease.

"The vast and in-depth knowledge we have accumulated through the present study opens the door to further extensive and diverse research. We hope and believe that we will ultimately reach the goal of developing a drug or drugs that will help children with autism resulting from genetic mutations."