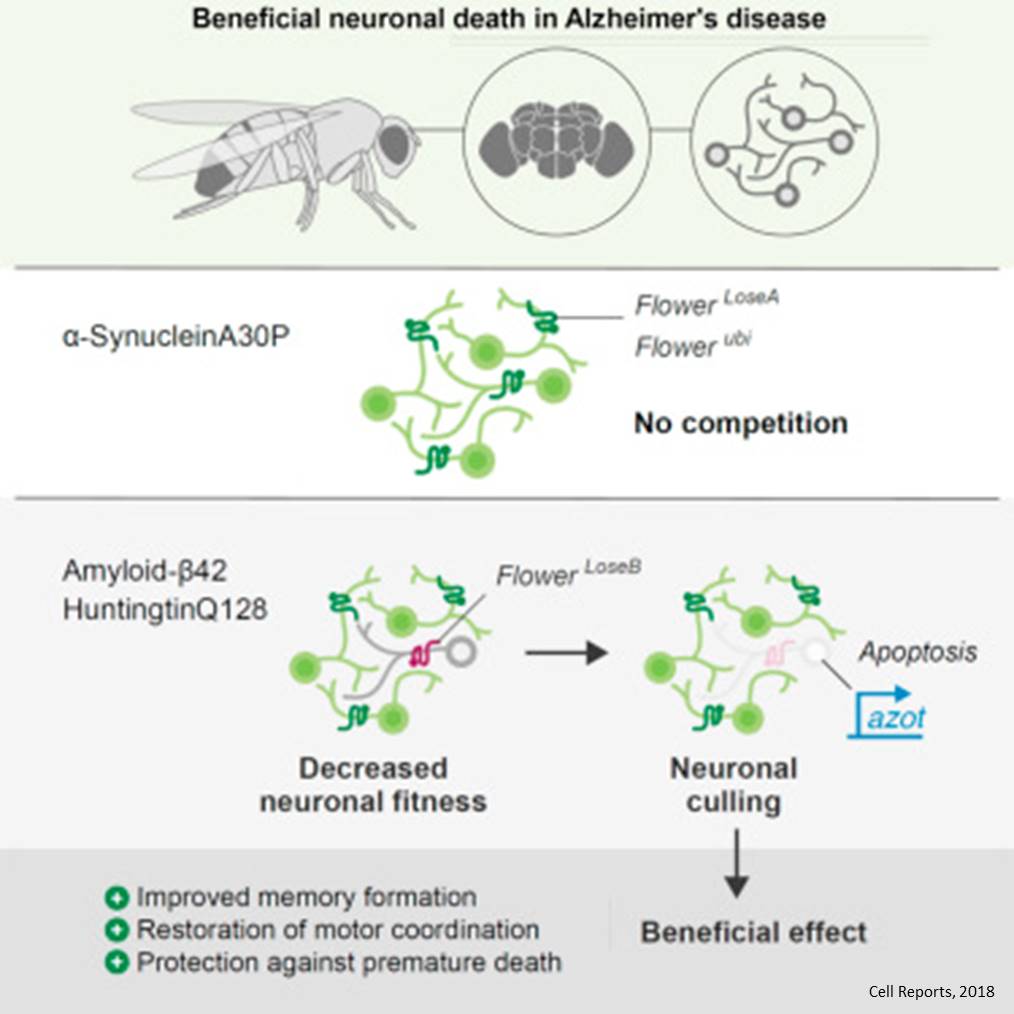 For the first time, scientists have shown that neuronal cell death in Alzheimer's disease (AD) may actually not be a bad thing - on the contrary, it may be the result of a cell quality control mechanism trying to protect the brain from the accumulation of malfunctioning neurons. Their results, which were obtained using fruit flies that had been genetically modified to mimic the symptoms of human AD, were published in the journal Cell Reports.

The cell quality control mechanism at play is called cell competition. It leads to the selection of the fittest cells in a tissue by enabling a "fitness comparison" between each cell and its neighbors - with the fitter cells then triggering the suicide of less fit ones.

It has been recently shown that cell competition is a normal, powerful anti-aging mechanism in the body in general and in the brain in particular. "In 2015, we discovered that clearing unfit cells from a tissue was a very important anti-aging mechanism to preserve organ function, says the principal investigator.

The team reasoned that, if these fitness comparisons happened in normal aging, they could also be involved in neurodegenerative diseases associated with accelerated aging, such as Alzheimer's, Parkinson's disease or Huntington's disease, the author explains.

The transgenic flies displayed symptoms and pathologies similar to those of AD patients: "they showed loss of long-term memory, accelerated aging of the brain and motor coordination problems, all of which got worse with age", specifies another author.

The first thing the scientists wanted to do was to see whether in these flies, neuronal death was indeed activated by the process of fitness comparison - in other words, "that the neurons were not dying on their own but being killed by fitter neighbors", the PI points out.

"When we started, the current view was that neuronal death must be always detrimental. And much to our surprise, we found that neuronal death actually counteracts the disease", says first author of the study. What happened was that when they blocked neuronal death in the flies' brain, the insects developed even worse memory problems, worse motor coordination problems, died earlier and their brain degenerated faster.

However, when they boosted the fitness comparison process, thus accelerating the death of unfit neurons, the flies expressing the AD-associated amyloid-beta proteins showed an impressive recovery. "The flies almost behaved like normal flies with regard to memory formation, locomotive behavior and learning", says the author, and this at a time point where the AD flies were already strongly affected.
This means that the anti-aging mechanism in question keeps working well in Alzheimer's disease and shows that, in fact, "the neuronal death protects the brain from more widespread damage and therefore the neuronal loss is not what is bad, it is worse not to let those neurons die", the author emphasizes. "Our most important finding is that we have probably been thinking the wrong way about Alzheimer's disease. Our results suggest that neuronal death is beneficial because it removes neurons that are affected by noxious beta-amyloid aggregates from brain circuits, and having those dysfunctional neurons is worse than losing them" the author concludes.

The results could have crucial therapeutical implications. "Some molecules have already been identified as potential inhibitors of cell suicide, and some experimental drugs exist, and are being tested which inhibit those inhibitors of cell death, therefore accelerating neuronal death", says the author.

But the author cautions: "this work has been done in fruit flies". It will be necessary to see, whether these results on neuronal death in Alzheimer's also hold true for humans. A protein helps in the stem cell maintenance and dedifferentiation

A new adipogenic cocktail that produces functional adipocytes from MSCs