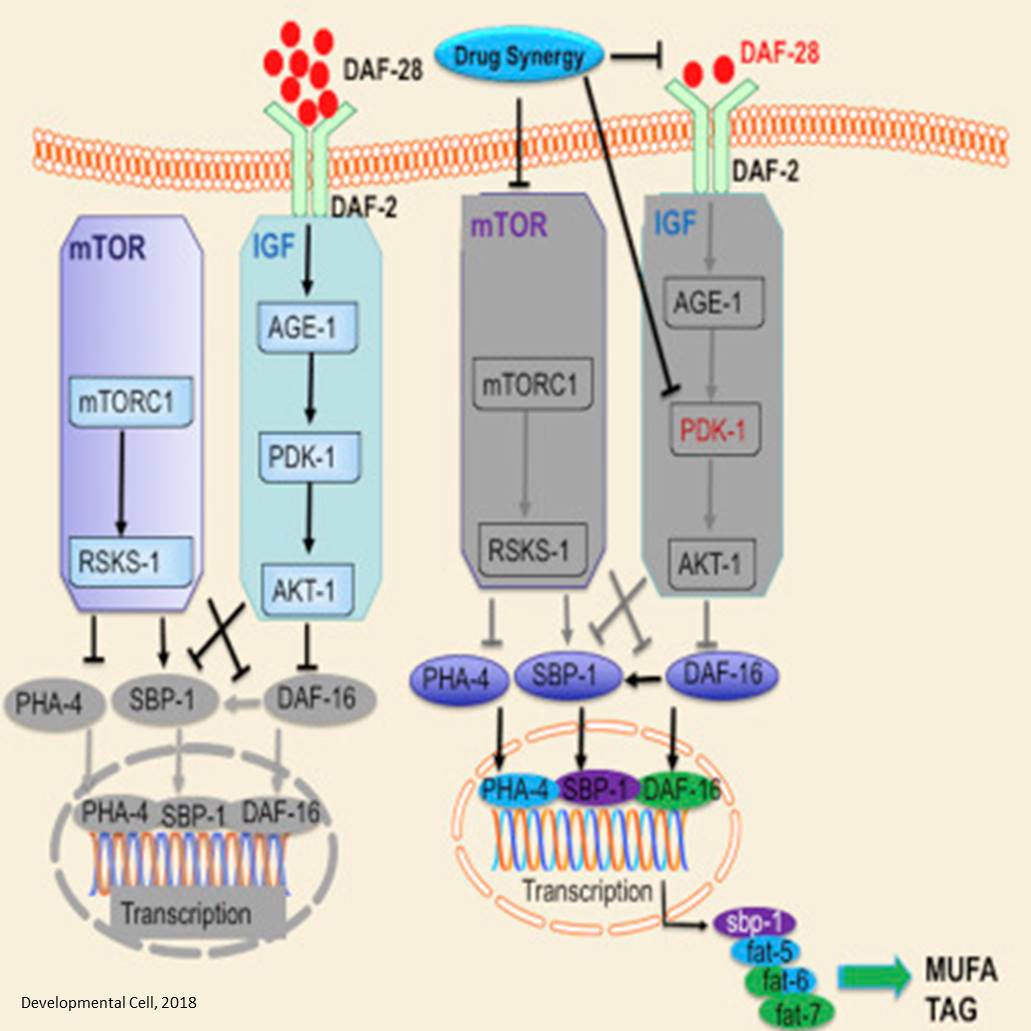 A team of researchers has discovered a combination of pharmaceutical drugs that not only increases healthy lifespan in the microscopic worm Caenorhabditis elegans (C. elegans), but also delays the rate of ageing in them, a finding that could someday mean longer, healthier lives for humans.

The study, published in the peer-reviewed international journal Developmental Cell, lays crucial groundwork for further research into designing drug combinations that produce the same effect in mammals.
"Many countries in the world, including Singapore, are facing problems related to ageing populations," said the senior author. "If we can find a way to extend healthy lifespan and delay ageing in people, we can counteract the detrimental effects of an ageing population, providing countries not only medical and economic benefits, but also a better quality of life for their people."

The team wanted to find out to what extent healthy lifespan could be extended by combining drugs targeting several pathways (underlying biological mechanisms) known to affect lifespan. For instance, the drug rapamycin is currently administered following organ transplants to prevent the body's immune system from rejecting the transplanted organs, but previous experiments by other research groups showed that it extends the lifespan of many organisms, including the C. elegans worms, fruit flies and mice.

The team administered combinations of two or three compounds targeting different ageing pathways to C. elegans. Results showed that two drug pairs in particular extended the mean lifespan of the worms more than each of the drugs individually, and in combination with a third compound almost doubled mean lifespans. This effect is larger than any lifespan extension that has previously been reported for any drug intervention in adult animals.

To identify the mechanism of these drug synergies, authors applied transcriptomics and lipidomics analysis. They found that drug interactions involved the TGF-β pathway and recruited genes related with IGF signaling. daf-2,daf-7, and sbp-1 interact upstream of changes in lipid metabolism, resulting in increased monounsaturated fatty acid content and this is required for healthy lifespan extension.

The drug treatments had no adverse effect on the worm's health. The researchers also discovered that across all ages, the treated worms were healthier and spend a larger percentage of their already extended lifespans in good health.

This is an important point for potential future human ageing interventions as increased health span, not just increased lifespan, would have significant medical and economic benefits. "We would benefit not only from having longer lives, but also spend more of those years free from age-related diseases like arthritis, cardiovascular disease, cancer, or Alzheimer's disease," the senior author said. "These diseases currently require very expensive treatments, so the economic benefits of being healthier for longer would be enormous."

They also found that a species of fruit flies (Drosophila melanogaster) treated with a similar drug cocktail also experienced significant lifespan extension. That two such evolutionarily-distinct organisms experience similar lifespan extensions suggests that the biological mechanisms that regulate these drug interactions on ageing are ancient, making it more likely that similar interactions between ageing pathways could be targeted in humans.

According to the senior author, this study is a proof-of-principle, showing that pharmacological intervention targeting multiple ageing pathways is a promising strategy to slow ageing and dramatically extend healthy lifespan in adult animals.

The next steps for this research will focus on three large areas. The first will be to extend this approach with the aim of designing interventions even more effective than the ones developed in this study. The second area will involve determining the molecular and biological mechanisms of how the drugs interact to delay ageing and increase lifespan in order to develop computer models to simulate these interactions, allowing researchers to test thousands more combinations through computer modelling. The ultimate goal of this line of research would be to develop drug interventions safe enough slow ageing in humans, a goal that is also pursued by many other research teams around the world. A mere drop of blood makes skin cells line up