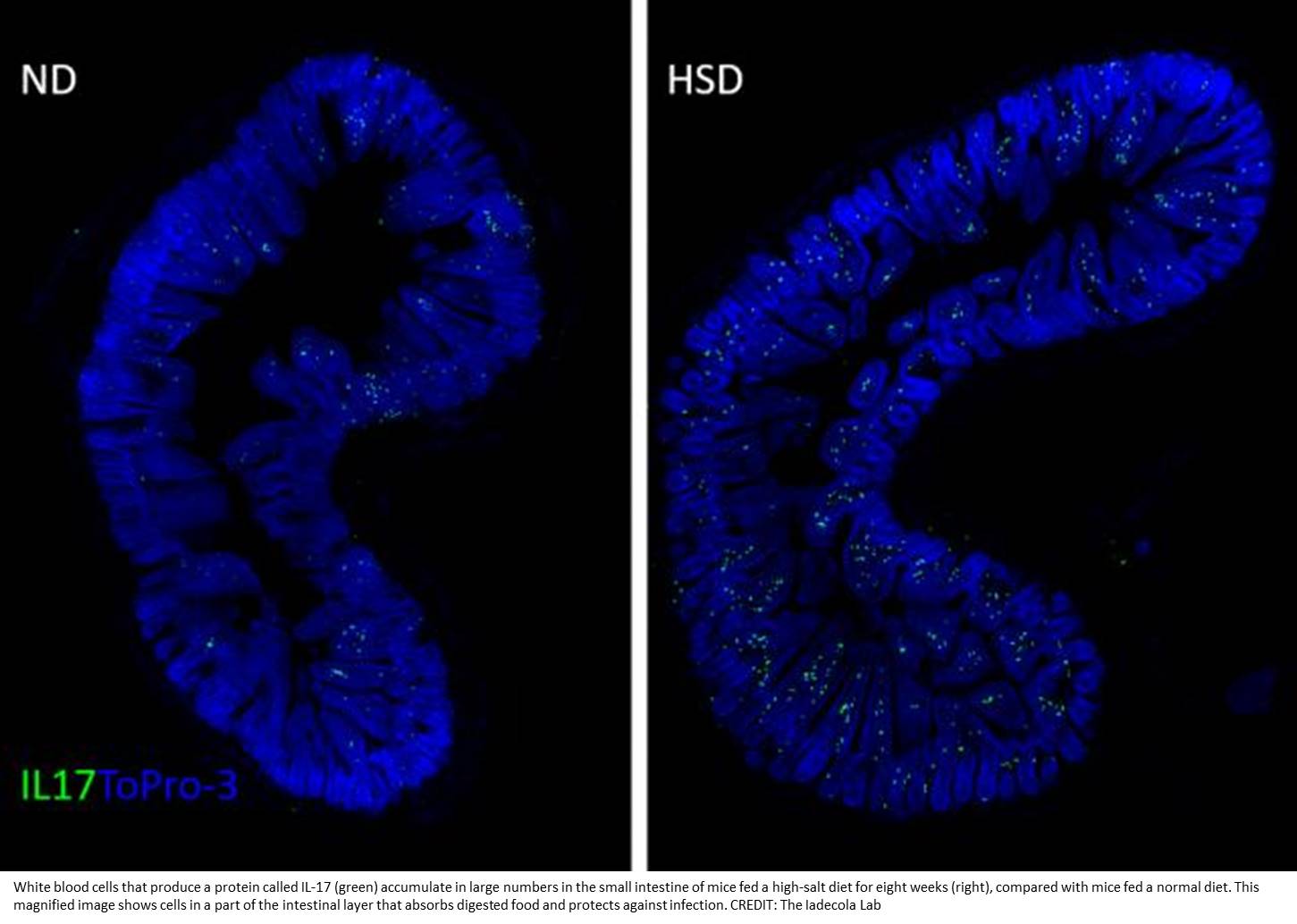 A high-salt diet reduces resting blood flow to the brain and causes dementia in mice, according to a new study published in Nature Neuroscience,and is the first to unveil a gut-brain connection linking high dietary salt intake to neurovascular and cognitive impairment.

"We discovered that mice fed a high-salt diet developed dementia even when blood pressure did not rise," said senior author. "This was surprising since, in humans, the deleterious effects of salt on cognition were attributed to hypertension."

The mice were given food containing 4 percent or 8 percent salt, representing an 8- to 16-fold increase in salt compared to a normal mouse diet. The higher level was comparable to the high end of human salt consumption. After eight weeks, the scientists examined the mice using magnetic resonance imaging. The mice showed marked reductions in resting cerebral blood flow in two areas of the brain involved in learning and memory: 28 percent decrease in the cortex and 25 percent in the hippocampus.

The scientists discovered that an impaired ability of cells lining blood vessels, called endothelial cells, reduced the production of nitric oxide, a gas normally produced by the endothelial cells to relax blood vessels and increase blood flow. To see if the biological effects of a high-salt diet could be reversed, researchers returned some mice to a regular diet for four weeks and found that cerebral blood flow and endothelial function returned to normal.

Next, the scientists performed several experiments to understand the biological mechanisms connecting high salt intake with dementia. They discovered that the mice developed an adaptive immune response in their guts, with increased activity of a subset of white blood cells that play an important role in the activity of other immune cells. The increase in those white blood cells, T helper lymphocytes called TH17, boosted the production of a protein called interleukin 17 (IL-17) that regulates immune and inflammatory responses, causing a reduction in the production of nitric oxide in endothelial cells.

In a final experiment, the scientists treated the mice with a drug known to prevent the suppression of nitric oxide activity, called ROCK inhibitor Y27632. The drug reduced circulating levels of IL-17 and the mice showed improved behavioral and cognitive functions, said the author.

"The IL-17-ROCK pathway is an exciting target for future research in the causes of cognitive impairment," said first author of the study. "It appears to counteract the cerebrovascular and cognitive effects of a high-salt diet, and it also may benefit people with diseases and conditions associated with elevated IL-17 levels, such as multiple sclerosis, rheumatoid arthritis, inflammatory bowel disease and other autoimmune diseases."