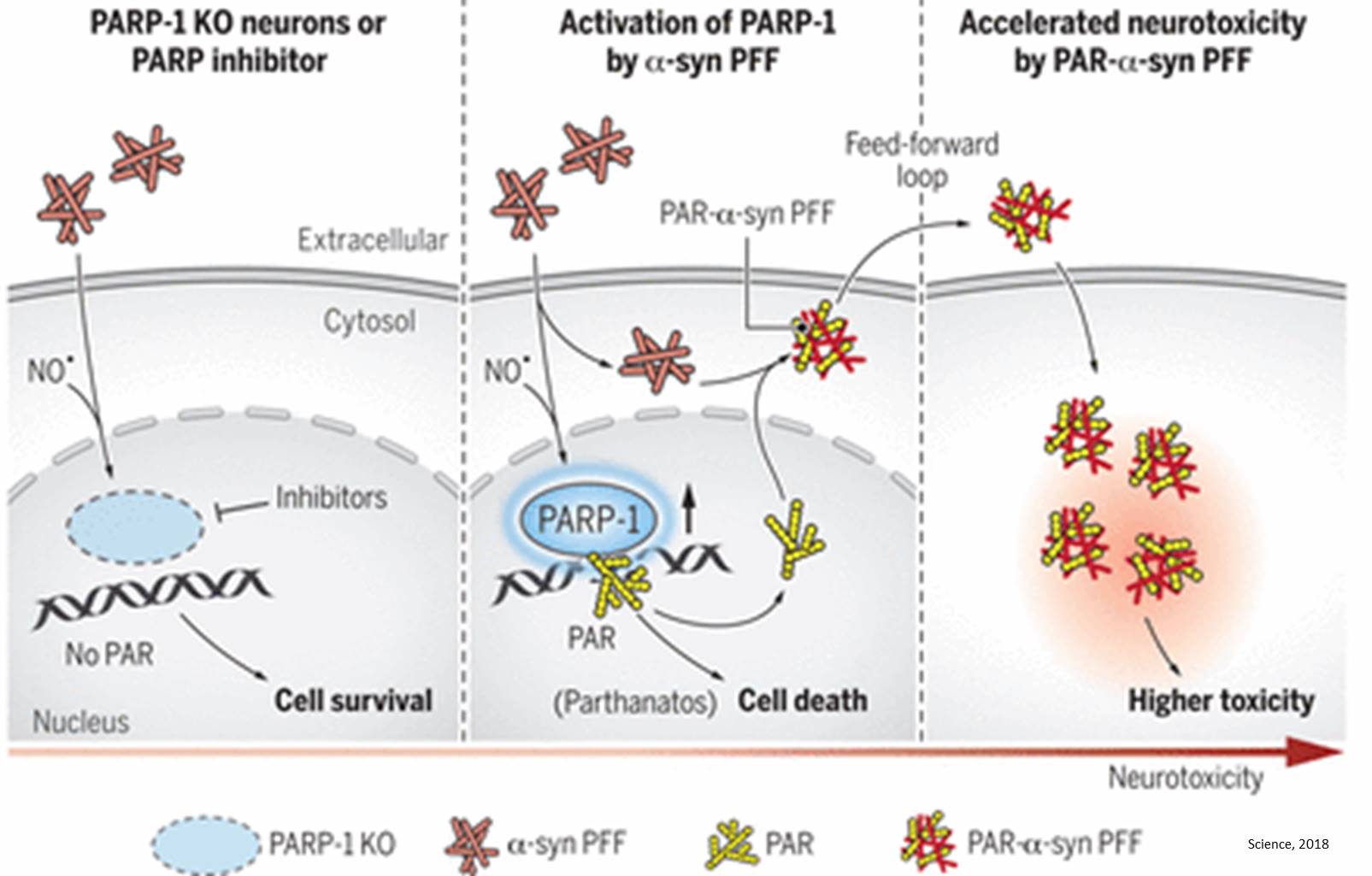 In experiments performed in mice, researchers report they have identified the cascade of cell death events leading to the physical and intellectual degeneration associated with Parkinson's disease.

Results of the study, published in Science, suggest promising new targets for drugs that could interrupt Parkinson's disease progression.

To find out more about which "road" to cell death Parkinson's cells travel, the research team treated lab-grown mouse brain cells with preformed clumps of alpha synuclein and observed their response over the course of 14 days. As the brain cells began to die off, the researchers observed that they had "turned on" a protein called PARP1, a gateway to cell death via Parthanatos.

They then tested whether blocking PARP1 could rescue the cells from certain death. In an additional experiment, the researchers again added alpha synuclein clumps to healthy mouse brain cells and then treated the cells with one of three drugs that block PARP1's function: veliparib (ABT-888), rucaparib (AG-014699) or talazoparib (BMN 673), all currently used by oncologists to treat breast and ovarian cancers. The researchers found that the cells treated with these drugs were protected from death at 14 days.

To test this principle in living mammals, the research team injected alpha synuclein clumps into the brains of normal mice and mice genetically engineered to lack the PARP gene. The researchers found that the normal mice began to show muscle weakness, loss of coordination and decreased movement, as seen in tests of the mice's grip strength and the ability to climb down a vertical pole, three months after treatment. However, both the mice lacking PARP and normal mice treated with PARP blockers showed no decline.

"Showing that blocking this key step in the Parthanatos pathway protected the cells against death is evidence that Parkinson's disease kills cells through this mechanism," says lead author on the study.

Past studies showed that PARP causes neurons to create a sugar called PAR, which binds to alpha synuclein and increases the rate at which the alpha synuclein proteins clump together. The authors wondered whether the increase in PARP1 he observed in Parkinson's cells could be causing a similar effect.

"Additionally, one out of four of our samples showed a correlation between PAR concentration and the disease's progression," says the lead author.

The researchers emphasized that much more research needs to be done before their findings can be applied to humans, but if further experiments support their results, the researchers hope to work on clinical trials with drug companies that currently produce drugs targeting PARP to test the ability of these drugs to slow, or even stop, Parkinson's disease in humans.

"If PARP inhibitors work in human Parkinson's disease patients as they have in mice, they could be protective of cells already affected by Parkinson's disease, but also slow the transmission of these harmful proteins to new cells," says the senior author.