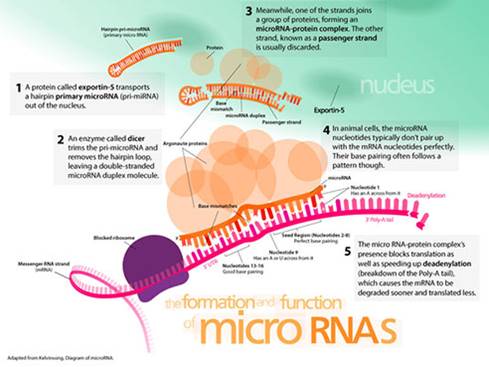 A tiny RNA appears to play a role in producing major depression, the mental disorder that affects as many as 250 million people a year worldwide.

Major depression, formally known as major depressive disorder, or MDD, brings increased risk of suicide and is reported to cause the second-most years of disability after low-back pain.

Researchers have found that amounts of this microRNA are significantly elevated in the brains of experimental rats with induced depression from corticosterone treatment, in the post-death brains of humans diagnosed with MDD and in peripheral blood serum from living patients with MDD, according to a study in Neuropsychopharmacology.

This microRNA -- miR-124-3p -- is thus a potential therapeutic target for novel drug development, and it can serve as a putative biomarker for MDD pathogenesis.

In previous work, researchers had seen that a set of miRNAs were coordinately regulated in the prefrontal cortex of the brains of MDD subjects. The prefrontal cortex, known for controlling the executive function of the brain, is critically involved in the response to stress, by regulating the endocrine glands known as the hypothalamic-pituitary-adrenal axis. The adrenal gland produces the stress hormone cortisol in humans and corticosterone in rodents.

Researchers identified eight highly potential target genes for binding by miR-124-3p, genes whose function is also reported to be critical in brain physiology during stress and MDD pathogenesis. Four of these potential target genes were significantly down-regulated in the prefrontal cortex of corticosterone-treated rats, and this down-regulation inversely correlated with miR-124-3p levels.

They showed that the four genes that were significantly down-regulated have evolutionarily conserved miR-124-3p binding sites across a wide range of higher vertebrate species.

In neuroblastoma cells grown in culture overexpression of miR-124-3p caused significant down-regulation for two of the potential target genes.

In prefrontal cortex neurons from depression-model rats treated with corticosterone resulted in significant binding by miR-124-3p to two of the potential target genes was seen, as measured from immunoprecipitated RNA-induced silencing complexes.

The locus-specific origin of for mature miR-124-3p was identified at a site on chromosome 3, out of three possible chromosomal sites, and two CpG "islands" that can act as sites from epigenetic modification by DNA methylation were identified near the miR-124 gene promoter on chromosome 3.

This miR-124-3 promoter was found to be hypo-methylated in the corticosterone-treated rats, and the gene expression of one DNA methyltransferase -- Dnmt3a -- was significantly repressed.

In human post-mortem brains of 15 controls and 15 MDD subjects, the MDD group showed significant increase in the expression of miR-124-3p, and expression of three of the potential target genes was significantly lower.

The level of miR-124-3p was significantly higher in the serum of 18 antidepressant-free MDD patients, as compared with 17 healthy controls.

"Altogether," the researchers conclude, "this is the first comprehensive and mechanistic study at in-vitro and in-vivo levels which demonstrates that, not only are there consistent depression-associated changes in the expression of miR-124-3p across different species, but also the genes that are targets of this miRNA are highly dysregulated, showing altered response at functional level."