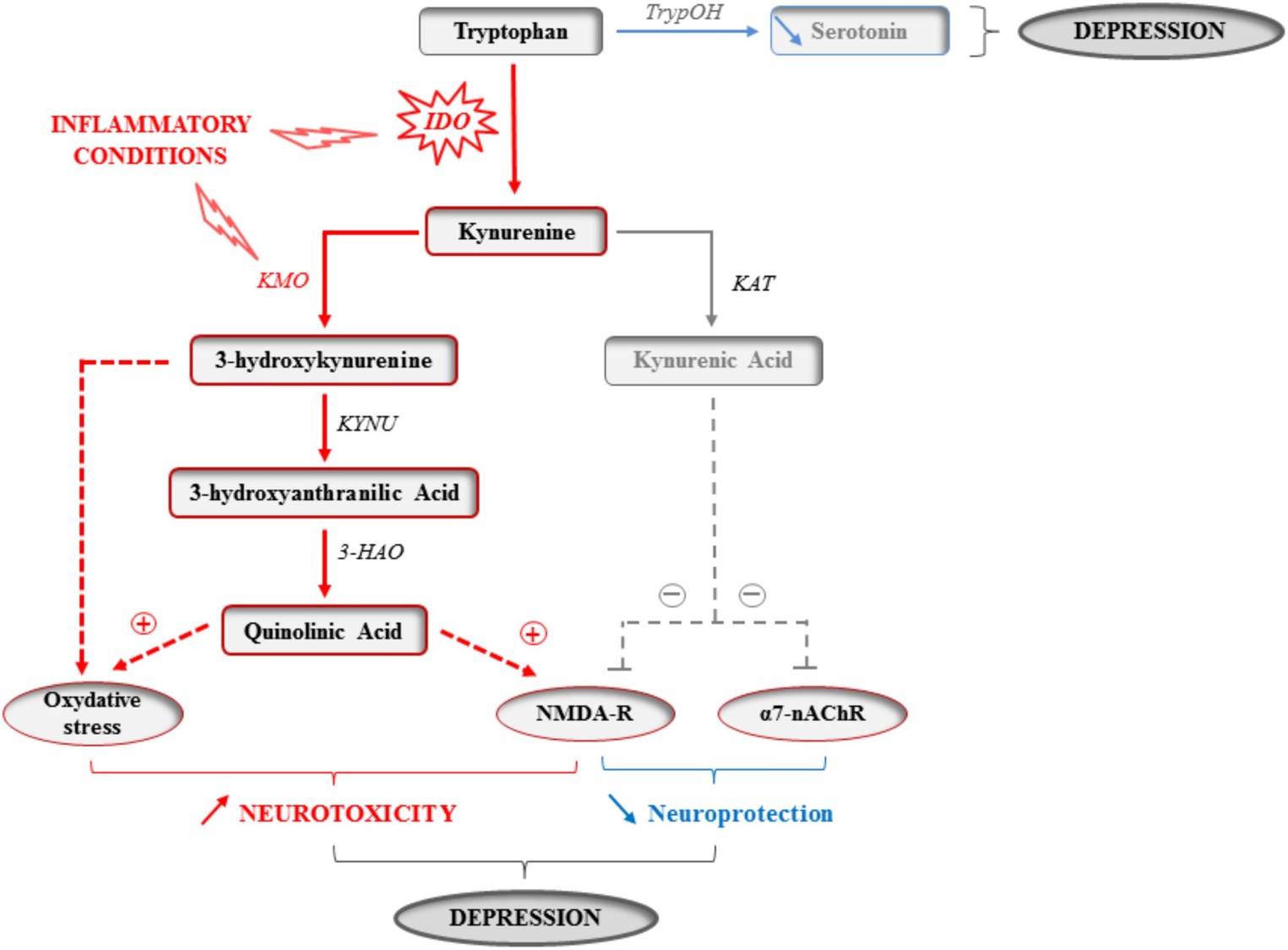 Chronic pain, or inflammation, is believed to be one of the major factors in the onset of major depressive disorder. Therefore, to better understand what happens physiologically during depression, scientists have long studied several metabolic processes or "pathways" related to inflammation.

One of these pathways, called the kynurenine pathway, is the principal pathway involved in metabolizing the amino acid tryptophan. Now, a new study by a team of scientists  shows that elevated levels of anthranilic acid--an important metabolite (product/intermediate) of the kynurenine pathway--in the blood may serve as a marker for identifying individuals who are experiencing depression-like symptoms and are at risk of developing major depressive disorder. This interesting new study is published in Scientific Reports.

"Various lines of scientific evidence suggest that tryptophan metabolism is involved in the symptoms of major depressive disorder," notes the senior author. For example, past studies have reported that patients with depression and other conditions involving depression-like symptoms show increased blood levels of various tryptophan metabolites produced by the kynurenine pathway. These findings led the team to speculate that metabolites of the kynurenine pathway may serve as "biomarkers" that could allow early detection of patients at risk of developing depression.

To test this idea, the team analyzed serum (fractionated, clear part of blood) samples from 61 patients who had clinical test scores that indicated a high risk of developing major depressive disorder. For scientifically accurate comparison, they also used a "control" group, wherein they analyzed serum samples from 51 healthy individuals. The scientists measured the serum levels of various kynurenine pathway metabolites with a technique called high-performance liquid chromatography, which allows precise measurement of concentrations.

Compared to the healthy "controls," the patients at risk of depression had increased serum levels of anthranilic acid. Furthermore, the women at risk of depression had reduced serum levels of tryptophan. Given that the kynurenine pathway consumes tryptophan and produces anthranilic acid, these findings are aligned with the previous findings of increased kynurenine pathway activity in patients at risk of developing major depressive disorder.

The scientists also wanted to find out whether tryptophan metabolite profiles can predict the progression of depression-related symptoms. For that, they did further analyses on samples and data from 33 patients at risk of depression whose scores on a clinical depression scale at different timepoints indicated regression from a healthy state to a depressed state. The analyses showed that increases in serum anthranilic acid levels over time correlated with worsening of the clinical test scores. The senior author states, "this finding confirms that there is indeed a strong, direct correlation between anthranilic acid levels in blood and the severity of depression on the clinical depression scale."

So, what is the takeaway of this study? According the team, these results show that clinicians can monitor serum levels of anthranilic acid to find out if patients are at risk of developing major depressive disorder. As the senior author notes, "monitoring the levels of tryptophan metabolites may be useful for the realization of pre-emptive medicine for depressive symptoms." Preemptive medicine in this case involves specific treatments that can prevent a patient from developing depression. Of course, more research is necessary to validate the clinical relevance of serum anthranilic acid levels and to understand exactly how tryptophan metabolism influences outwardly aspects like mood. But, that said, this study has the potential to pinpoint the physiological processes that contribute to depression and thus improve the standard of care for preventing depression.