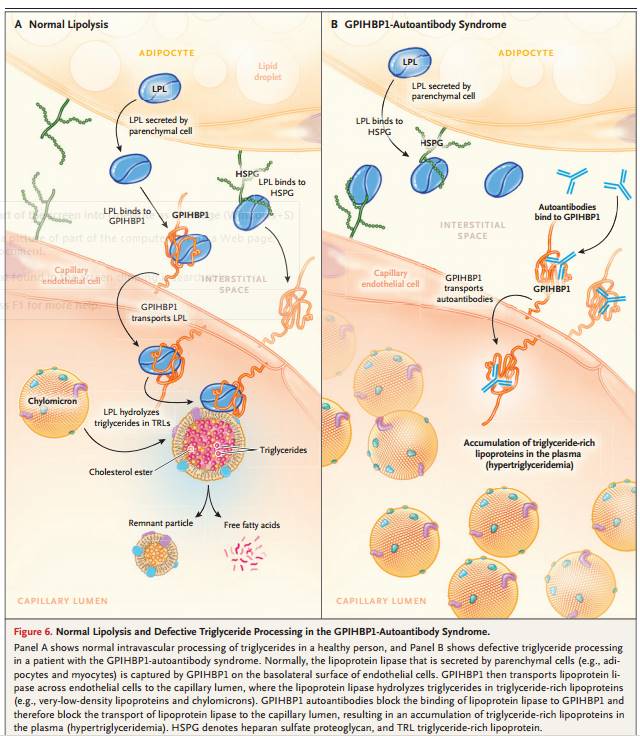 People with hypertriglyceridemia often are told to change their diet and lose weight. But a high-fat diet isn't necessarily the cause for everyone with the condition.

Researchers have discovered a subset of people with hypertriglyceridemia whose bodies produce autoantibodies -- immune-response molecules that attack their own proteins -- causing high levels of triglycerides in the blood.

"It's important to recognize this new syndrome because it is life threatening and potentially treatable," author said. The study is published in the New England Journal of Medicine.

Triglycerides in the bloodstream are broken down by an enzyme called lipoprotein lipase, known as LPL, inside capillaries -- the body's smallest blood vessels. In 2010, researchers discovered that another protein, GPIHBP1, binds to LPL and moves it into capillaries. Without GPIHBP1, LPL is stranded in the spaces between tissues, where it is useless for digesting the triglycerides in the bloodstream.

In their new research, researchers found a group of people with hypertriglyceridemia whose GPIHBP1 can't transport lipoprotein lipase into capillaries. But in these cases, they didn't have genetic mutations; instead, they have autoantibodies against GPIHBP1 that prevent GPIHBP1 from binding LPL.

More research will be needed to define the frequency of the GPIHBP1 autoantibody syndrome and how to treat it, but it seems likely that immunosuppressive drugs could help reduce autoantibodies and lowering plasma triglyceride levels, author said.