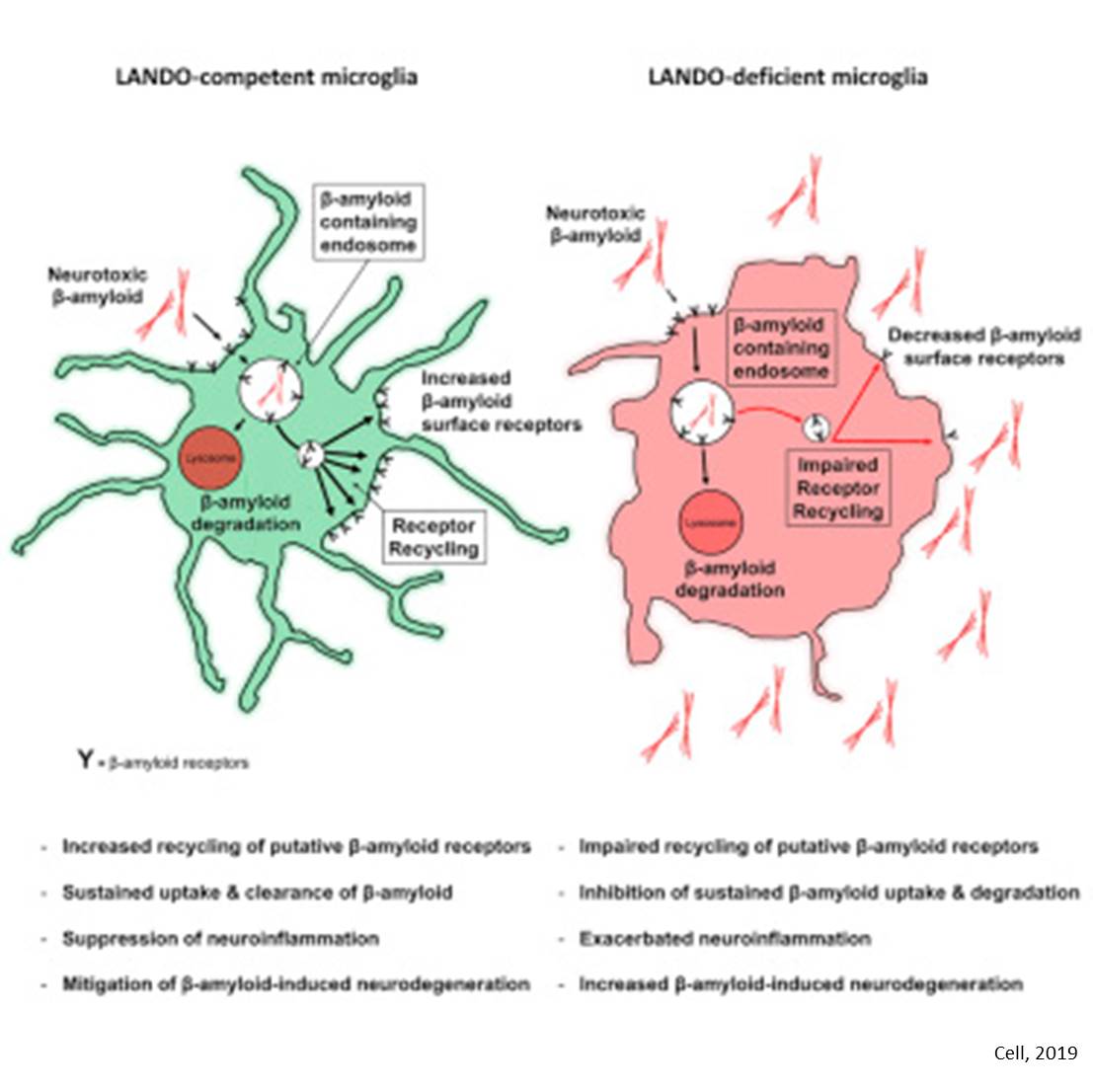 Scientists have discovered a pathway that functions like a car wash to prevent the buildup of a toxic protein associated with Alzheimer's disease. The report appeared in the journal Cell.

The findings in a mouse model of Alzheimer's offer a possible new approach to treatment of the chronic neurodegenerative disorder, which is the sixth leading cause of death in the U.S. The newly identified pathway also helps regulate inflammation, so the discovery could yield strategies for unleashing the immune response against malignant brain tumors.

Researchers called the pathway LC3-associated endocytosis or LANDO. The novel non-canonical function of several autophagy proteins in the conjugation of LC3 to Rab5 +, clathrin + endosomes containing β-amyloid in a process of LC3-associated endocytosis (LANDO) found in microglial cells, the primary immune cells of the brain and central nervous system. However, preliminary evidence suggests LANDO is a fundamental process that functions in cells throughout the body.

Investigators showed that LANDO protected against deposits of neurotoxic β-amyloid protein in mice. Activation of the pathway also guarded against toxic neuroinflammation and neurodegeneration, including memory problems.

Mice lacking LANDO but not canonical autophagy in the myeloid compartment or specifically in microglia have a robust increase in pro-inflammatory cytokine production in the hippocampus and increased levels of neurotoxic β-amyloid. This inflammation and β-amyloid deposition were associated with reactive microgliosis and tau hyperphosphorylation. LANDO-deficient AD mice displayed accelerated neurodegeneration, impaired neuronal signaling, and memory deficits.

"In the context of neurodegenerative diseases such as Alzheimer's, activating LANDO in microglial cells could prove to be therapeutically beneficial through increased clearance of β-amyloid and mitigation of neuroinflammation," said corresponding author.

β-amyloid protein accumulation in neurons is a hallmark of Alzheimer's. Scientists knew microglial cells take up β-amyloid proteins. Discovery of the LANDO pathway answers questions about what comes next.

The authors compared LANDO to the operator of an automatic carwash. In this case, the cars are the receptors on the microglial cells that bind to neurotoxic β-amyloid proteins and bring the protein into the car wash. And, just as cars return to the streets after the dirt is gone, when the β-amyloid is disposed of, the receptor returns to the microglial surface where it can pick up additional β-amyloid.

An automatic car wash depends on hardware to attach the car to a track that moves it through the machine. Similarly, several proteins are required for LANDO functioning. The proteins--Rubicon, Beclin 1, ATG5 and ATG7--are better known for their roles in a related cell pathway used to recycle unneeded and unwanted cell components. These proteins decline with age as their expression decreases.