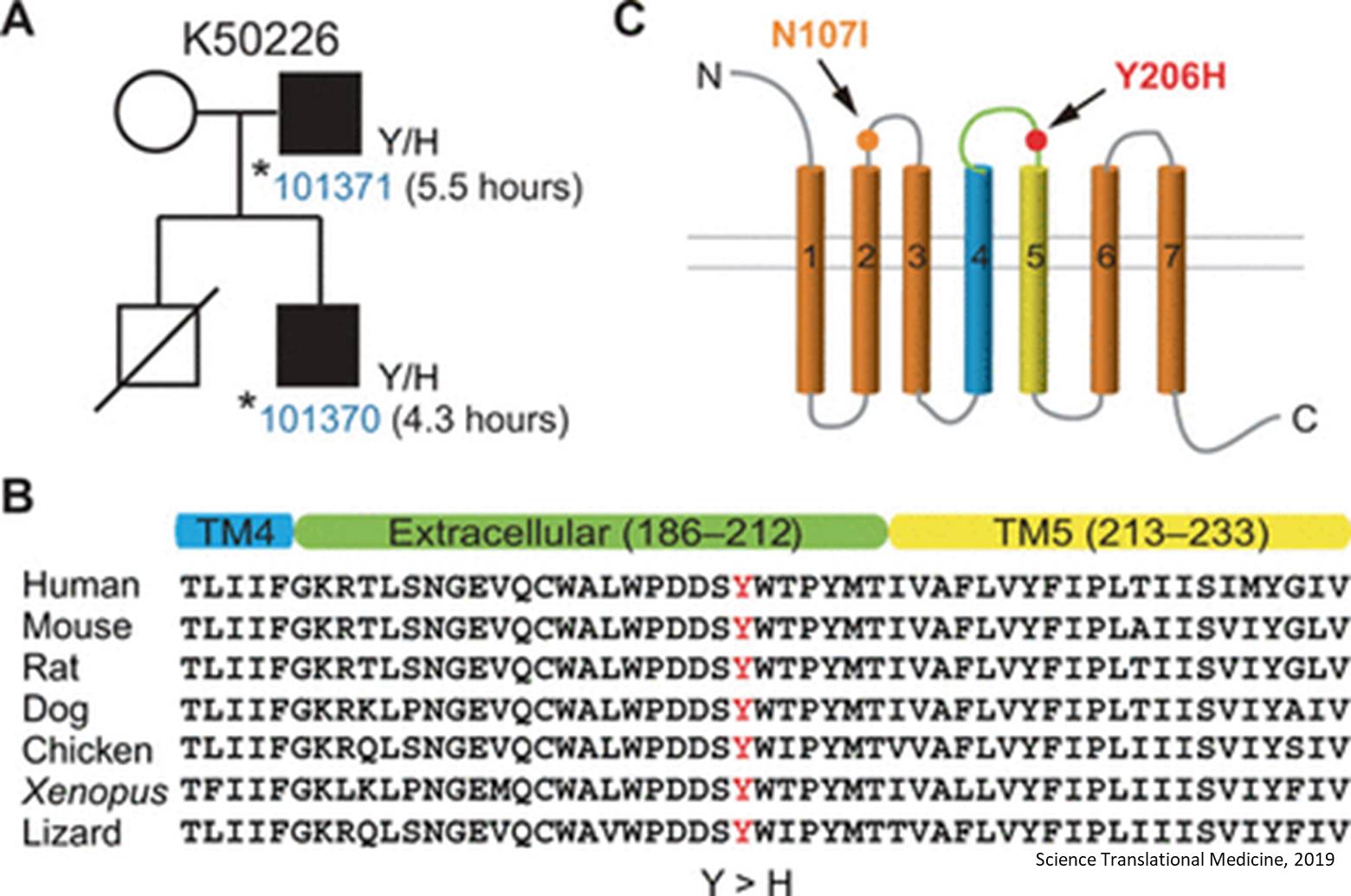 The scientists who identified the two known human genes that promote "natural short sleep" -- nightly sleep that lasts just four to six hours but leaves people feeling well-rested -- have now discovered a third, and it's also the first gene that's ever been shown to prevent the memory deficits that normally accompany sleep deprivation. The researchers believe this latest discovery may one day lead to a druggable target for therapies that improve sleep and treat sleep disorders.

The findings, detailed in a study published in Science Translational Medicine, were announced just weeks after the same team reported their discovery of the second short sleep gene, an achievement that was a decade in the making.

"Ten years ago, when we identified the first short sleep gene, the field of sleep genetics was in its infancy. People didn't think that genes could significantly influence sleep behaviors, and big breakthroughs were rare. Today the field is advancing much more rapidly, and we're beginning to get a better picture of how important your genes are to getting a good night's sleep," said the senior author.

The team identified the newest gene in a father-and-son pair who averaged just 5.5 and 4.3 hours of sleep each night, respectively -- far less than the eight or more hours that most people need in order to avoid feeling sleep-deprived.

"There are serious health consequences associated with sleep deprivation," said the co-senior author of the new study. "People who are chronically sleep deprived are more likely to suffer from obesity, diabetes, cardiovascular problems, depression and cognitive deficits."

But like other natural short sleepers, the father-son pair don't seem to experience any of the adverse cognitive or physical effects that generally accompany sleep deprivation. The authors wanted to know why.

The researchers performed gene sequencing on both father and son, and zeroed in on a single-letter mutation in a gene called NPSR1, which encodes a signaling protein that sits on the surface of neurons and was previously shown to be involved in regulating sleep. Like the mutations in the other known short sleep genes, this mutation is exceedingly rare, occurring in fewer than one in 4 million people.

To understand the gene's function in the brain, the researchers performed a series of experiments on mice that were genetically engineered to carry an identical mutation in the mouse version of NPSR1. Mice with the mutation spent less time sleeping and were more physically active than those without it, in part because, at the biochemical level, the mutant version of NPSR1 behaves differently from the more common version of the protein.

NPSR1 is part of a signaling pathway in the brain that promotes wakefulness. When it's activated, it switches on other proteins in the same pathway by attaching a chemical modification to them. To test whether the mutant and non-mutant versions of NPSR1 were able to activate components of this pathway to the same degree, the researchers injected a compound that triggers NPSR1 into both normal and genetically-engineered mice. They then looked at proteins downstream from NPSR1 to see how many of them had been chemically modified to promote activation. They found that mutant NPSR1 activated many more downstream proteins than the non-mutant version.

The researchers then performed a complementary experiment and found that mutant NPSR1 is easier to trigger than the non-mutant version of the protein. Together, these results suggest that the version of NPSR1 associated with short sleep is easier to activate, and is also better at switching on other components of this wakefulness-promoting pathway.

The researchers next turned to a memory test. Mice were placed in a specially designed chamber and allowed to explore their new environment for a few minutes, after which an electrical current was switched on to gently shock their feet. When normal mice are removed from the chamber and returned to it a day later, they remember the shock and either freeze or roam the chamber more slowly -- but only if they've had sufficient sleep.

By contrast, sleep-deprived mice experience memory deficits (just like sleep-deprived humans) and have trouble forming lasting memories of the jolting experience. When they're returned to the chamber a day after being shocked, they don't exhibit any of the expected fear-based behaviors. But carriers of the mutant version of NPSR1 did remember the electrical shocks, even after being sleep deprived.

"NPSR1 not only promotes short sleep, it also prevents memory problems that usually result from sleep deprivation," the senior author said. "This is the first gene that anyone's discovered that exerts a protective effect against one of the many adverse consequences of sleep deprivation."

And because the NPSR1 protein is a cell-surface receptor, the researchers believe that it may one day be possible to develop drugs that activate or interfere with NPSR1.

"Not only does this discovery provides us with a better understanding of how genes contribute to an unusual sleep phenotype, it also offers up an appealing target for future therapies that may help treat sleep disorders or prevent certain cognitive deficits associated with lack of sleep," the co-senior author said.