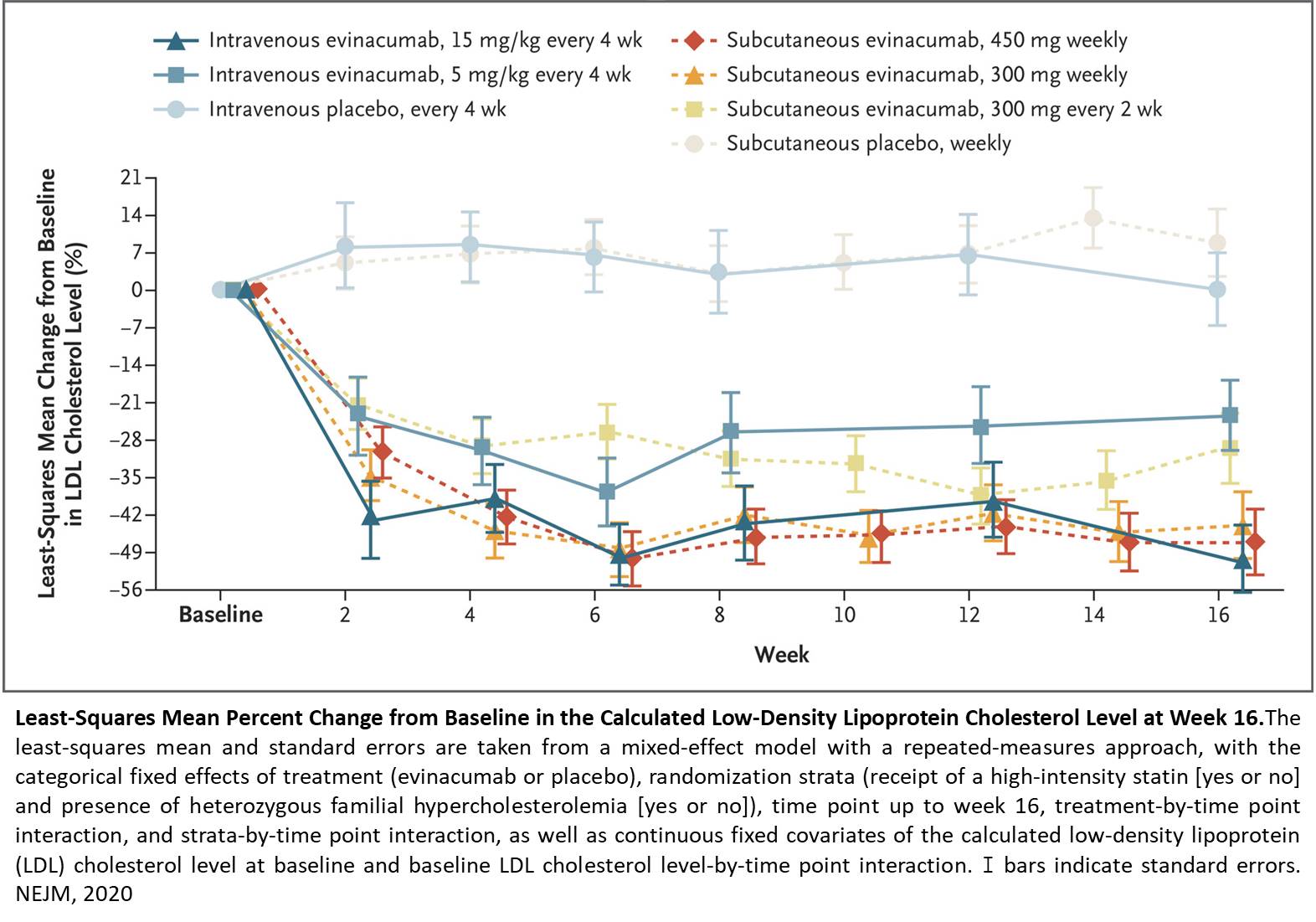 The investigational drug evinacumab reduced low-density lipoprotein (LDL) cholesterol--the so-called "bad" cholesterol--by 50 percent in patients with severe hypercholesterolemia whose condition is resistant to standard treatments, a phase 2 study has found. Results from the study sponsored by Regeneron, are being presented as "late breaking science" at the American Heart Association Scientific Sessions 2020 on Sunday, November 15, and simultaneously published in The New England Journal of Medicine.

Evinacumab is a fully human monoclonal antibody that works through a different mechanism than existing drugs to bring dangerously high cholesterol to normal levels when combined with maximally-tolerated lipid-lowering therapies in people with familial hypercholesterolemia, a common inherited condition that is difficult to treat.

"Our study assessing the safety and efficacy of evinacumab shows that it can lower LDL cholesterol by half in patients unable to attain target guidelines despite maximally tolerated lipid lowering therapy," says principal investigator. "Evinacumab is a fully human monoclonal antibody that inhibits angiopoietin like protein 3 (ANGPLT3) and lowers LDL cholesterol through an LDL receptor independent pathway. Genetic studies have shown that people who are missing or have low levels of ANGPTL3 are known to have very low lifelong levels of LDL cholesterol and rarely suffer from atherosclerotic cardiovascular disease."

In the United States, approximately 7 percent of adults have been diagnosed with severe hypercholesterolemia, which is defined as having untreated LDL cholesterol at levels greater than or equal to 190 mg per deciliter. Familial hypercholesterolemia is present in 1 in 313 people, but it is far more common in patients with early-onset cardiovascular disease, occurring in 1 in 15. The 2018 American Heart Association/American Congress of Cardiology recommends an LDL cholesterol goal of less than or equal to 70 mg per deciliter in patients with very high risk of atherosclerotic cardiovascular disease, and more aggressive targets have been established by the European Society of Cardiology guideline with recommendations to lower LDL cholesterol to 55 mg/dL or below. These goals have proven difficult for patients with hypercholesterolemia to reach through standard "triple therapy" of a high-intensity statin, a PCSK9 inhibitor, and ezetimibe, a drug that limits the absorption of cholesterol from the intestine.

"There's an unmet need for agents that address refractory hypercholesterolemia through a pathway that's independent of the LDL receptor," explains the author. "If approved by the U.S. Food and Drug Administration, evinacumab may potentially fills that clinical gap for patients, by reducing severely elevated LDL cholesterol."

The phase 2 multi-center, double-blinded, placebo-controlled study of evinacumab included 272 patients with primary hypercholesterolemia including a majority having a diagnosis of heterozygous familial hypercholesterolemia (HeFH). HeFH is an inherited form of hypercholesterolemia most often caused by mutations in the LDL receptor gene. The research team found that subcutaneous administration of the agent at 450 mg weekly resulted in LDL cholesterol lowering of 56 percent, and 52.9 percent at 300 mg weekly compared to the placebo group. With monthly intravenous administration of evinacumab at 15 mg/kg, LDL cholesterol reduction was 50.5 percent compared to the placebo group. All patients receiving evinacumab were on background lipid-lowering therapies.

Evinacumab was well-tolerated among most patients. One patient treated with subcutaneous evinacumab had difficulty breathing, and another had a mild anaphylactic reaction. Both stopped the medication and their symptoms improved with other treatment. Two deaths were reported in the trial but were linked to underlying health conditions.

"Our study demonstrates that a regimen of either subcutaneous or intravenous evinacumab can have a significant impact on LDL cholesterol," notes the author. "If approved for use in this setting, evinacumab could potentially arm cardiologists with a major new add-on therapy to bring patients with HeFH to or closer to their cholesterol-lowering goal."