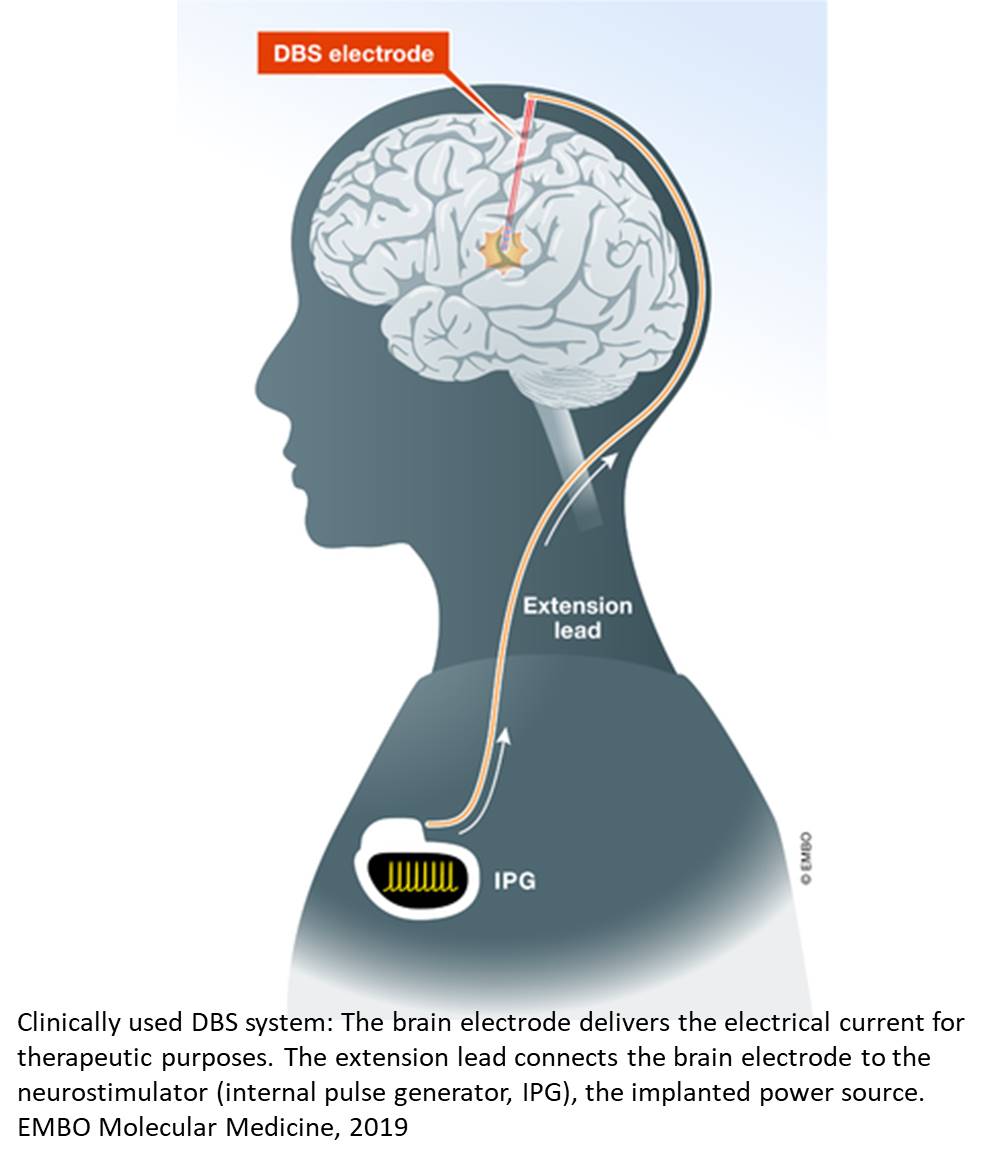 Targeted neuromodulation tailored to individual patients' distinctive symptoms is an increasingly common way of correcting misfiring brain circuits in people with epilepsy or Parkinson's disease. Now, scientists have demonstrated a novel personalized neuromodulation approach that -- at least in one patient -- was able to provide relief from symptoms of severe treatment-resistant depression within minutes.

The approach is being developed specifically as a potential treatment for the significant fraction of people with debilitating depression who do not respond to existing therapies and are at high risk of suicide.

"The brain, like the heart, is an electrical organ, and there is a growing acceptance in the field that the faulty brain networks that cause depression -- just like epilepsy or Parkinson's disease -- could be shifted into a healthier state by targeted stimulation," said corresponding author of the new study. "Prior attempts to develop neuromodulation for depression have always applied stimulation in the same site in all patients, and on a regular schedule that fails to specifically target the pathological brain state. We know depression affects different people in very different ways, but the idea of mapping out individualized sites for neuromodulation that match a patient's particular symptoms had not been well explored."

In a case study published in Nature Medicine, the authors mapped the effects of mild stimulation of several mood-related brain sites in a patient with severe treatment-resistant depression. They found that stimulation at different sites could alleviate distinct symptoms of the brain disease -- reducing anxiety, boosting energy levels, or restoring pleasure in everyday activities -- and, notably, that the benefits of different stimulation sites depended on the patient's mental state at the time.

The proof-of-concept study lays the groundwork for a major five-year clinical trial called the PRESIDIO trial, that will evaluate the effectiveness of personalized neuromodulation in 12 patients with severe treatment-resistant depression. The trial will build on the current study by identifying brain signatures that reflect individual participants' symptoms. With this information, neuromodulation devices can be programmed to respond in real time to these faulty network states with targeted stimulation that brings patients' brain circuits back into balance.

"We've developed a framework for how to go about personalizing treatment in a single individual, showing that the distinctive effects of stimulating different brain areas are reproducible, long-lasting and state-dependent," said co-senior author on the new study. "Our trial is going to be groundbreaking in that every person in the study is potentially going to get a different, personalized treatment, and we will be delivering treatment only when personalized brain signatures of a depressed brain state indicate treatment is needed."

In the new study, the team demonstrated the use of a brain-mapping approach to identify patient-specific therapeutic stimulation sites as the first phase of the PRESIDIO trial.

The team used a minimally invasive approach called stereo-EEG to place 10 intracranial electrode leads into the brain of the first patient enrolled in the trial -- a 36-year-old woman who has experienced multiple episodes of severe treatment-resistant depression since childhood. The patient then spent 10 days at the UCSF Helen Diller Medical Center at Parnassus Heights while researchers systematically mapped effects of mild stimulation across a number of brain regions that prior research had shown were likely to have an effect on mood.

The researchers found that 90-second stimulation of a several different brain sites could reliably produce an array of distinctive positive emotional states, as measured by a set of clinical scales that were used to assess the patient's mood and depression severity throughout the study. For example, after stimulation of one region, the patient reported "tingles of pleasure," while stimulation of a second area resulted in a feeling of "neutral alertness ... less cotton and cobwebs." Stimulation of a third area -- a region called orbitofrontal cortex (OFC) that had been identified in Chang's earlier studies -- produced a sensation of calm pleasure "like ... reading a good book."

"I've tried literally everything, and for the first few days I was a little worried that this wasn't going to work," the patient recalled. "But then when they found the right spot, it was like the Pillsbury Doughboy when he gets poked in the tummy and has that involuntary giggle. I hadn't really laughed at anything for maybe five years, but I suddenly felt a genuine sense of glee and happiness, and the world went from shades of dark gray to just--grinning."

The researchers focused in on an area known as the ventral capsule/ventral striatum, which seemed to best address this particular patient's primary symptoms of low energy and loss of pleasure in everyday activities.

"As they kept playing with that area, I gradually looked down at the needlework I had been doing as a way to keep my mind off negative thoughts and realized I enjoyed doing it, which was a feeling I haven't felt for years," she said. "It struck me so clearly in that moment that my depression wasn't something I was doing wrong or just needed to try harder to snap out of -- it really was a problem in my brain that this stimulation was able to fix. Every time they'd stimulate, I felt like, 'I'm my old self, I could go back to work, I could do the things I want to do with my life.'"

The researchers found that the effects of stimulation could be tailored to the patient's mood, and that positive effects lasted for hours, well beyond the 40-minute window designed into the study protocol. The patient's symptoms also got significantly better over the course of the 10-day study, leading to a temporary remission lasting 6 weeks.

"The fact that we could eliminate this patient's symptoms for hours with just a few minutes of targeted stimulation was remarkable to see," the senior author said. "It emphasizes that even the most severe depression is a brain circuit disease that may just need a targeted nudge back into a healthy state. Unlike antidepressant drugs, which might not have an effect for one to three months, probably by altering brain circuits in ways we don't understand, our hope is that this approach will be effective precisely because it only requires brief, mild stimulation when the undesired brain state we want to change is present."

When the patient's symptoms returned after her initial remission, the researchers proceeded to the next phase of the PRESIDIO trial -- implanting a responsive neuromodulatory device called the NeuroPace RNS System. This device is widely used for seizure control in epilepsy patients, in whom it can detect signs of oncoming seizures in real time and initiate brief, targeted stimulation that cancels them out. In the PRESIDIO trial, the device instead detects signature patterns of brain activity that indicate that a participant is moving towards a highly depressed state, and then provides mild, undetectable levels of stimulation to a targeted brain region to counteract this downswing.

"We hope that providing gentle neuromodulation throughout each day will be able to prevent patients from falling into long-lasting depressive episodes," said the author. "The idea is that keeping neural circuit activity functioning along the correct track, the pathways that support pathological negative thought processes in depression can be unlearned."

The NeuroPace device was implanted in June of 2020 and activated in August, and so far, the study participant has reported that her symptoms -- which in the past seven years had made it impossible for her to hold a job or even drive -- have almost completely vanished, despite significant life stressors like a COVID exposure, helping her parents move out of state, and caring for her mother after a fall.

"2020 was terrible for everyone, and I've had some particularly stressful life events, but for the first time in a long time, I feel like I can bob back up again," she said. "I can't tell exactly when the device turns on, but I generally feel more of a sense of clarity, an ability to look at my emotions rationally and apply the tools that I've worked on through psychotherapy, and that is so far from where I was before."

In the trial's next phase, the patient will switch between six weeks with the device turned on and six weeks with it off, without being aware of which is which, in order to assess possible placebo effects.