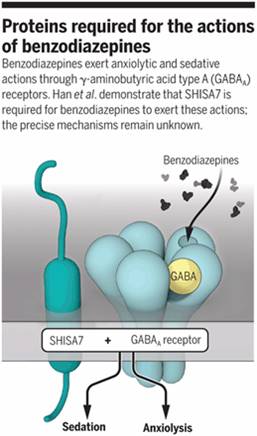 Between 1999 and 2017, the United States experienced a 10-fold increase in the number of people who died from overdoses of Valium and other benzodiazepines. For years, scientists thought that these powerful sedatives, which are used to treat anxiety, muscle spasms, and sleeping disorders, worked alone to calm nerves. Now, in an article published in Science, researchers show that this view of the drugs and the neural circuits they affect may have to change. In a study of mice, scientists discovered that both may need the assistance of a 'sticky' gene, named after a mythological figure, called Shisa7.

"We found that Shisa7 plays a critical role in the regulation of inhibitory neural circuits and the sedative effects some benzodiazepines have on circuit activity," said the senior author of the study. "We hope the results will help researchers design more effective treatments for a variety of neurological and neuropsychiatric disorders that are caused by problems with these circuits."

In this study, the team looked at synapses that rely on the neurotransmitter gamma-aminobutyric acid (GABA) to calm nerves. Communication at these synapses happens when one neuron fires off packets of GABA molecules that are then quickly detected by proteins called GABA type A (GABAA) receptors on neighboring neurons.

Before this study, it was thought that benzodiazepines worked alone to boost the nerve calming responses of GABAA receptors. The lab found that, instead, these responses may depend greatly on whether a protein encoded by the Shisa7 gene is stuck to GABAA receptors. While the results could ultimately help researchers understand the sedatives better, the study began with a simple question about Shisa7.
In 2004, Japanese researchers originally discovered that the Shisa gene played a role in the formation of frog heads and, named the gene after a mythological, large-headed, guardian figure depicted in statues throughout southern Japan.

Like many scientists, the senior author thought that Shisa7 played a role in controlling a completely different type of synapse that relies on the neurotransmitter glutamate to excite, rather than quiet, neurons. Recent studies suggested that Shisa7 along with other Shisa genes encodes proteins that adhere to glutamate receptors. Once attached, these "auxiliary" proteins can control a receptor's response to glutamate or its presence at synapses. Then, a few years ago, the current team noticed something interesting in a scientific article on the Shisa proteins.

"We found the results striking. The paper showed that Shisa7 was the only protein in this family that seemed to have no effect on the activity of an important type of glutamate receptor," said the senior author. "This caught our attention and we decided to take a closer look."

To  researchers systematically examined Shisa proteins in mouse neurons. To their surprise, they found that Shisa7 appeared to play a unique and critical role in the nerve quieting GABA synapses.

Further experiments suggested that Shisa7 proteins attached directly to GABAA receptors. Electrical recordings showed that Shisa7 hastened receptor responses to the transmitter GABA and nearly doubled the size of responses made in the presence of Valium (a.k.a. diazepam), suggesting the protein made the receptor more sensitive to benzodiazepines.

"These results suggest that Shisa7 directly shapes inhibitory synaptic responses under a variety of conditions, including the presence of benzodiazepines," said another author.

Finally, experiments in mice supported the idea that Shisa7 also plays a role in the calming effects of benzodiazepines. For instance, in one set, they tested the ability of diazepam to reduce the high anxiety mice felt when confronted with open, elevated spaces.

Here, the mice were placed in the middle of an elevated maze of two crisscrossing arms. One arm was covered and the other open. In agreement with previous studies, the researchers saw that injections of diazepam increased the time the wild-type mice chose to walk on open arms, suggesting the drug reduced anxiety. In contrast, diazepam had no effect on mice that were engineered to have no Shisa7 gene. These mice spent the same amount of time exploring the open arms regardless of whether they received the drug or a placebo.

In other experiments, the researchers found that Shisa7 also influenced the drowsiness and hypnotic effects of benzodiazepines. Mice that lacked Shisa7 were much less likely than wild-type mice to fall asleep from high levels of diazepam. Moreover, the mutant mice were dramatically better at standing up after diazepam-induced stumbles, in fact, some appeared resistant to stumbling.

"Our results shine a spotlight on the potential clinical importance of auxiliary proteins like Shisa7. Many of the neurological drugs we use today are designed to control the activity of synaptic receptors. For the first time, we show that researchers may also want to consider auxiliary proteins like Shisa7 in developing new treatments that target GABAA receptors," said the senior author.

The team plans to explore in greater detail the role Shisa7 may play in inhibitory circuits and in other neurological disorders.