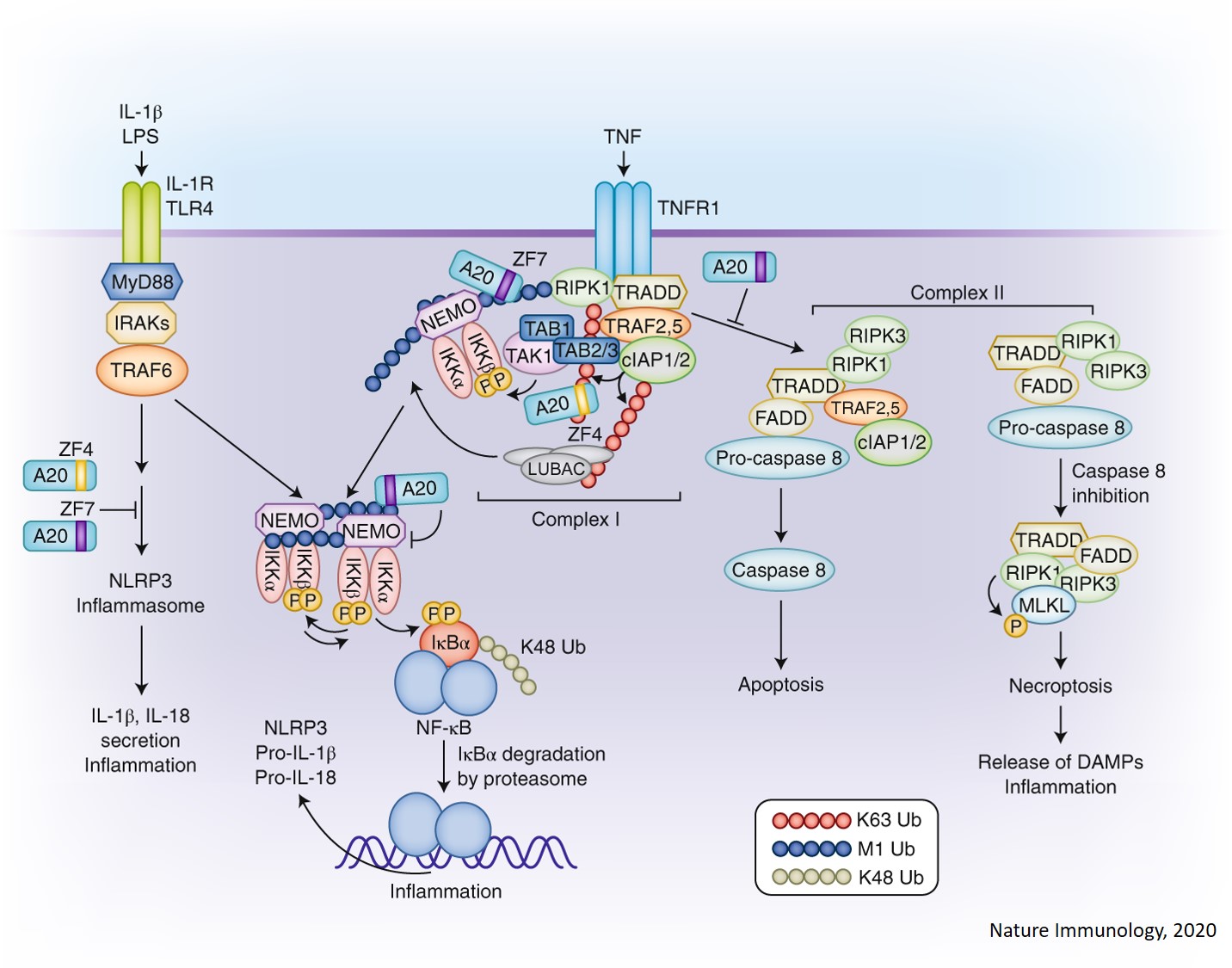 A study by the research team has unraveled a critical molecular mechanism behind autoimmune and inflammatory diseases such as rheumatoid arthritis, Crohn's disease, and psoriasis. They discovered how the protein A20 prevents inflammation and autoimmunity, not through its enzymatic activities as has been proposed, but through a non-enzymatic mechanism. These findings open up new possibilities for the treatment of inflammatory diseases. The results of the study are published in the leading journal Nature Immunology.

Inflammatory autoimmune diseases such as rheumatoid arthritis, inflammatory bowel diseases, psoriasis, and multiple sclerosis are amongst the most common diseases. Their prevalence has been rapidly expanding over the last few decades, which means that currently millions of patients are under constant treatment with anti-inflammatory drugs to keep their condition under control.

As an example, about 1 % of the western population is affected by rheumatoid arthritis (RA), a chronic and progressive inflammatory disease of the joints that severely affects the patients' quality of life. The molecular mechanisms that cause diseases such as RA need to be better understood in order to be able to develop new therapies to treat patients suffering from inflammatory pathologies.

The researchers investigated the molecular signaling mechanism by which the protein A20 controls inflammatory reactions. The current study builds further upon earlier work for Inflammation Research which demonstrated that A20 acts as a strong anti-inflammatory mediator in many models of inflammatory disease.

In this study, the researchers show that the anti-inflammatory activity of A20 depends on the presence of a specific domain within the protein that is able to bind to ubiquitin, an important modification on other proteins. This allows A20 to interfere with signaling pathways within the cell and as such prevent the activation of a cellular response that would normally result in inflammation and disease development.

The authors generated Tnfaip3 gene-targeted A20 mutant mice bearing inactivating mutations in the zinc finger 7 (ZnF7) and ZnF4 ubiquitin-binding domains, revealing that binding to polyubiquitin is essential for A20 to suppress inflammatory disease. They demonstrate that a functional ZnF7 domain was required for recruiting A20 to the tumor necrosis factor receptor 1 (TNFR1) signaling complex and to suppress inflammatory signaling and cell death.

The combined inactivation of ZnF4 and ZnF7 phenocopied the postnatal lethality and severe multiorgan inflammation of A20-deficient mice. Conditional tissue-specific expression of mutant A20 further revealed the key role of ubiquitin-binding in myeloid and intestinal epithelial cells.

The senior author explains the importance of their findings: "Our results are important from a scientific point of view since they help us understand how A20 prevents inflammatory reactions in the body's cells. However, this knowledge also has therapeutic implications, and suggests that drugs based on that specific A20 domain could have strong anti-inflammatory activities. Therefore, such drugs could be effective in the treatment of RA and various other inflammatory and autoimmune diseases."

A link between mitochondrial damage and osteoporosis

Autophagy and neurodegeneration in Huntington's disease