Abnormalities in the thalamus linked to schizophrenia 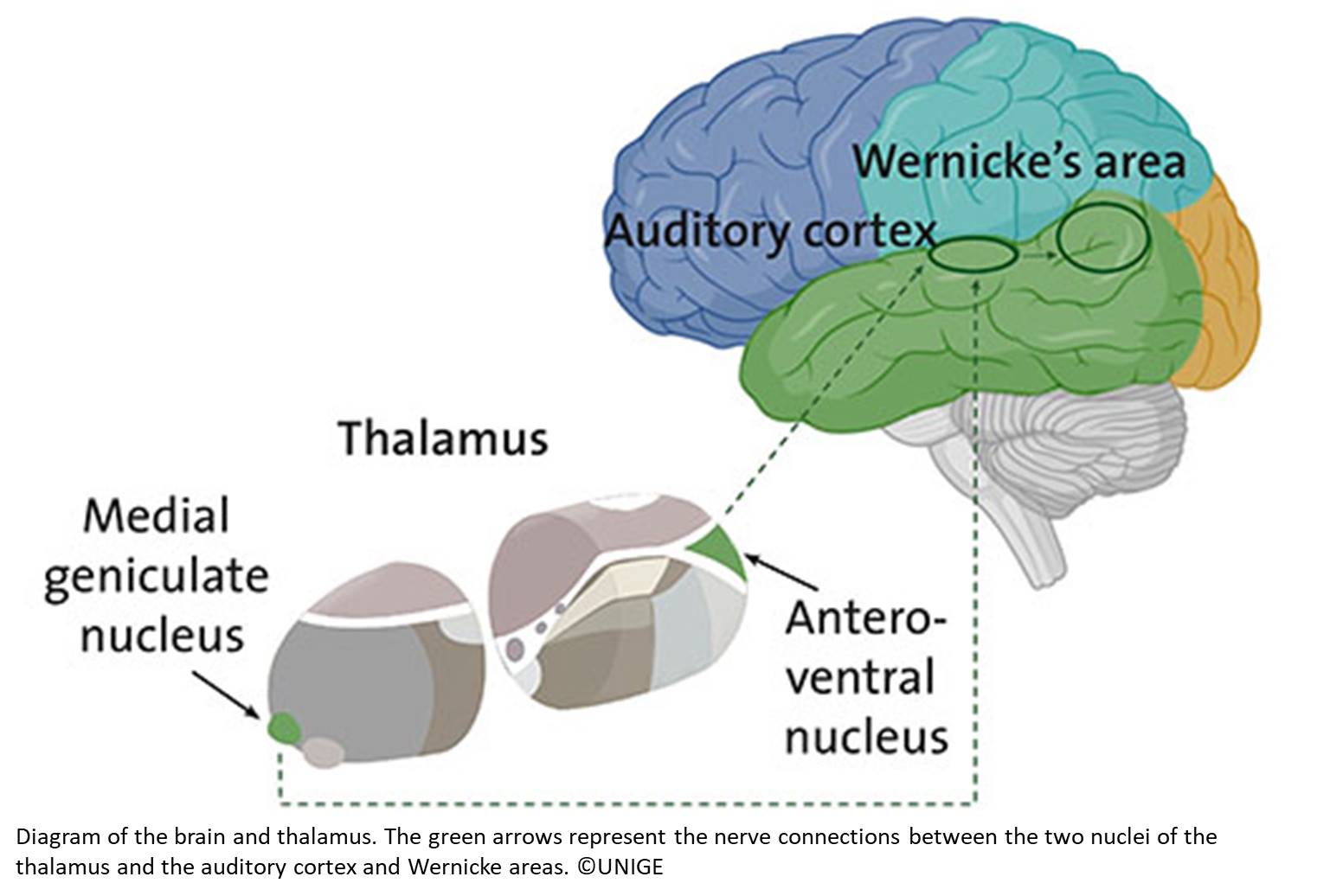 There is an extremely high probability that individuals with 22q11.2 micro deletion syndrome – a rare genetic disorder – will develop schizophrenia together with one of its most common symptoms, auditory hallucinations. Scientists have been studying this category of patients. They have succeeded in linking the onset of this hallucinatory phenomenon with the abnormal development of certain substructures of a region deep in the brain called the thalamus. These thalamic nuclei have been identified using a combination of functional and structural magnetic resonance imaging. They are involved in processing memory and hearing among other things. The authors suggest that there might be an explanation for these auditory hallucinations that is almost "mechanical": the immaturity of the axon connections that bind the thalamic nuclei to the cortex areas responsible for hearing. The results, published in the journal Biological Psychiatry: CNNI, pave the way for a new understanding of the pathophysiology and treatment of schizophrenia.

Several studies in recent years have demonstrated a link between schizophrenia and abnormalities in the development of the thalamus, a deep brain region that processes a number of cognitive functions, including working memory and hearing. More specifically, the volume of the thalamus is smaller on average in schizophrenic patients. Accordingly, it has been possible to link the onset of auditory hallucinations with an overly-intense neuronal connectivity between the thalamus and auditory cortex. An auditory hallucination is defined as the perception of sound in the absence of an external sound source. It is one of the most characteristic symptoms of schizophrenia, a psychotic disorder that affects approximately 1% of the population.

"We used a cohort of patients that is unique in the world in an attempt to analyse the mechanism behind this hallucinatory phenomenon in more detail," begins the senior author. "For the last 19 years, a program backed by the University of Geneva has helped us enlist and monitor individuals suffering from a rare neurogenetic syndrome: 22q11.2 micro deletion syndrome, which is caused by the absence of a small piece of DNA in chromosome 22. These patients are often prone to auditory hallucinations among other things. More importantly, 30 to 35% of them develop schizophrenia during their lifetime. This is the category with the highest risk of falling victim to the psychotic disorder."

This cohort, made up of over 200 patients living in Switzerland, France, Belgium, Luxembourg and England, represents a unique opportunity to follow individuals from childhood to adulthood and submitting them to a regular battery of tests (medical imaging, genetic analyses, etc. ). It offers the chance to understand the neuro-developmental processes involved in the onset of schizophrenia and possibly to determine potential treatments that could delay, slow down or even halt the progression of psychotic symptoms.

The study focused on 230 people aged 8 to 35 years: 120 from the cohort and 110 healthy individuals who served as controls. Participants underwent a brain scan every three years using functional and structural magnetic resonance imaging. They were not given any task to complete: the machine simply recorded the brain activity generated by floating thoughts activating the major neural networks by turns. The scientists focused in particular on the various sub-structures of the thalamus that each has its own functions.

"We discovered that the thalamic nuclei involved in auditory and visual sensory processing and working memory are smaller in people with deletion syndrome than in others," explains the article's first author. "And among people with deletion syndrome, the volume of the medial geniculate nucleus (the MGN, one of the sub-parts of the thalamus involved in the auditory pathways) and that of the other nuclei used in memory are smaller in the group with auditory hallucinations relative to the group that doesn't experience any. The size of the MGN differs between the two groups from childhood with a divergent developmental trajectory".

The scientists made a further observation: in the patients suffering from auditory hallucinations, they noticed a hyper-connectivity between the thalamic nuclei and cortical areas devoted to the primary processing of hearing and Wernicke's area, which is highly significant for understanding language. This type of thalamo-cortical hyper-connection is normal during childhood, when the neural networks are being formed. The fact that it persists during adolescence and then into adulthood is the sign that the connections have never reached maturity.

"This characteristic could provide an almost mechanical explanation for the hallucinatory phenomenon in these patients," notes the senior author. "Our results also open up new perspectives for the more general understanding of the pathophysiology of schizophrenia. Identifying the markers that foreshadow the development of the disease in such detail gives us many new targets for action using specific neuroprotective drugs, for example, to prevent symptoms as much as possible."

Link between BRCA1 and Ewing sarcoma

Antioxidant production pathway in golgi is defective in Huntington's disease