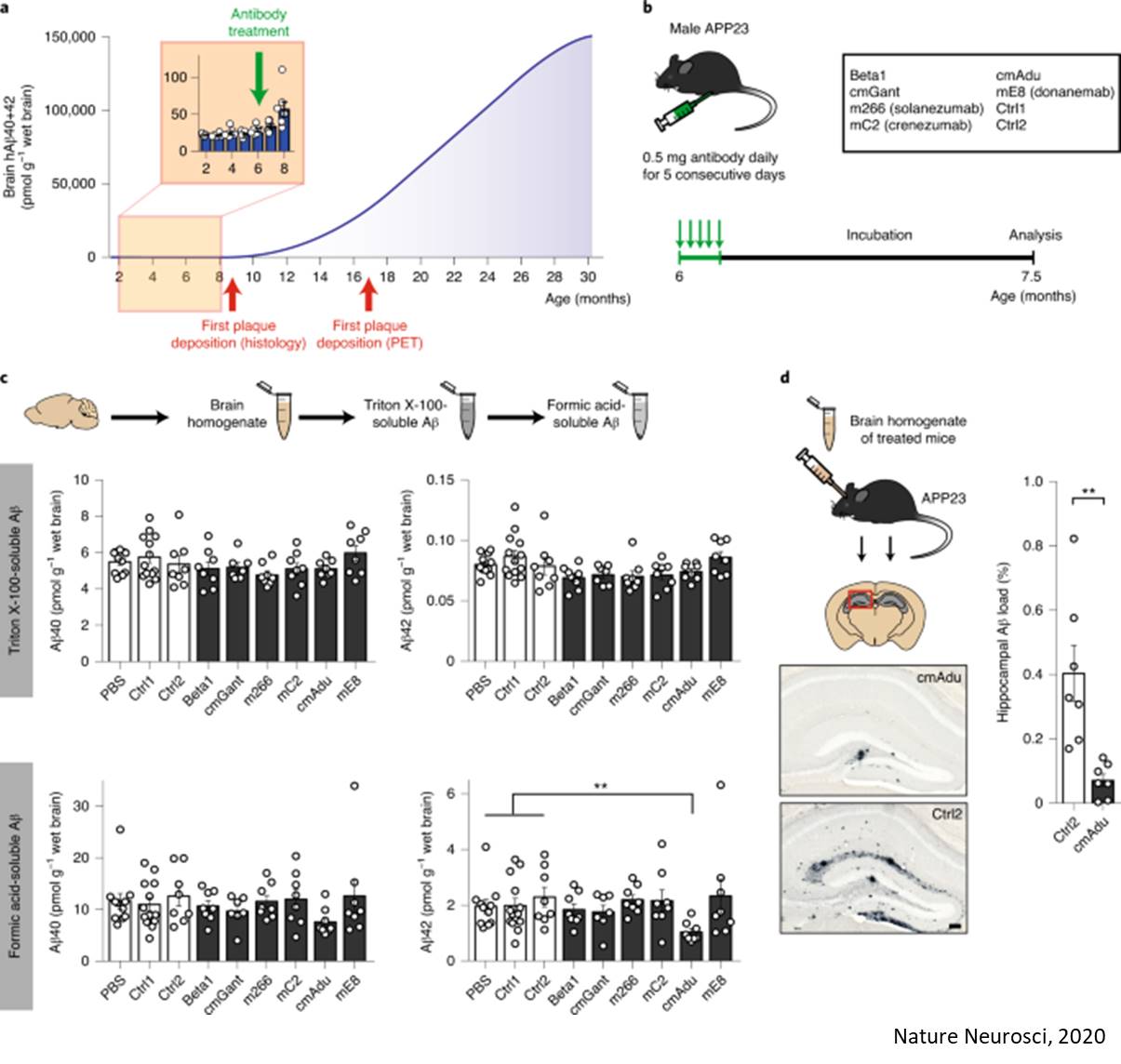 Alzheimer's disease develops over decades. It begins with a fatal chain reaction in which masses of misfolded beta-amyloid proteins are produced that in the end literally flood the brain. Researchers show in the journal Nature Neuroscience that this chain reaction starts much earlier in mice than commonly assumed. This means that in addition to the well-known early phase of the disease with protein deposits but without symptoms of dementia, there is an even earlier phase in which the chain reaction is triggered by invisible tiny seeds of aggregation. If this is confirmed to occur also in humans, a treatment addressing the causes of disease would have to prevent this process. The scientists have already identified an antibody that might accomplish this.

To this end, they searched among the already known antibodies directed against misfolded beta-amyloid proteins for antibodies that can recognize and possibly also eliminate these early seeds of aggregation that currently escape biochemical detection. Of the six antibodies investigated, only aducanumab had an effect: Transgenic mice that were treated for only 5 days before the first protein deposits manifested, later on in life showed only half of the usual amount of deposits in their brains. "This acute antibody treatment obviously removes seeds of aggregation, and the generation of new seeds takes quite some time, so that much less deposits are formed in the weeks and months after the treatment." An author commented on the findings- "Indeed, the mice had only half the brain damage six months after this acute treatment."

Although research on Alzheimer's has been dealing with seeds of aggregation for quite some time, nobody really knows what they look like. They are currently only defined by their role as triggers for this fatal chain reaction. In this respect, they are similar to so-called prions that cause BSE in cattle, scrapie in sheep and Creutzfeldt-Jakob disease in humans. Pathogenic prions force their correctly folded peers into their abnormal shape. The authors therefore used the antibody aducanumab to learn more about the structure of the seeds of aggregation. They were able to show that aducanumab recognizes protein aggregates, but not individual beta-amyloid chains. The scientists now hope to use the antibody as a fishhook to isolate and better describe these seeds of aggregation.

"Our results suggest that we need to focus more on this very early phase of Alzheimer's and look for biomarkers for it. We also need more antibodies that recognize different types of the seeds of aggregation and help us to understand how they trigger the chain reaction and how they can be used for therapy," the author said.

There is currently consensus that treatment of Alzheimer's disease must begin earlier, not when memory decline has already begun. However, the results of the scientists are now redefining the term "earliness" in mice. Until now, the phase with protein deposits but without symptoms of dementia has been considered to be "early". The new studies suggest that a treatment of Alzheimer's that addresses the causes should start much earlier.