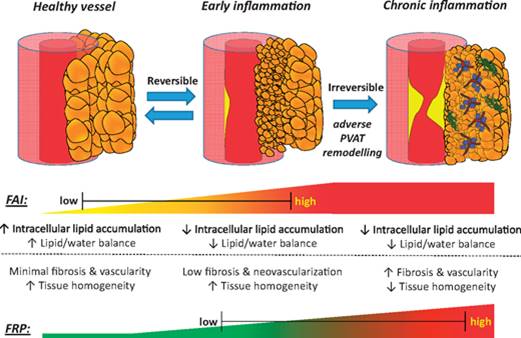 Technology developed using artificial intelligence (AI) could identify people at high risk of a fatal heart attack at least 5 years before it strikes, according to new research. The findings are being presented at the European Society of Cardiology (ESC) Congress in Paris and published in the European Heart Journal.

Researchers have developed a new biomarker, or 'fingerprint', called the fat radiomic profile (FRP), using machine learning. The fingerprint detects biological red flags in the perivascular space lining blood vessels which supply blood to the heart. It identifies inflammation, scarring and changes to these blood vessels, which are all pointers to a future heart attack.

When someone goes to hospital with chest pain, a standard component of care is to have a coronary CT angiogram (CCTA). This is a scan of the coronary arteries to check for any narrowed or blocked segments. If there is no significant narrowing of the artery, which accounts for about 75 per cent of scans, people are sent home, yet some of them will still have a heart attack at some point in the future. There are no methods used routinely by doctors that can spot all of the underlying red flags for a future heart attack.

In this study, the team firstly used fat biopsies from 167 people undergoing cardiac surgery. They analysed the expression of genes associated with inflammation, scarring and new blood vessel formation, and matched these to the CCTA scan images to determine which features best indicate changes to the fat surrounding the heart vessels, called perivascular fat.

Next, the team compared the CCTA scans of the 101 people, from a pool of 5487 individuals, who went on to have a heart attack or cardiovascular death within 5 years of having a CCTA with matched controls who did not, to understand the changes in the perivascular space which indicate that someone is at higher risk of a heart attack. Using machine learning, they developed the FRP fingerprint that captures the level of risk. The more heart scans that are added, the more accurate the predictions will become, and the more information that will become 'core knowledge'.

They tested the performance of this perivascular fingerprint in 1,575 people in the SCOT-HEART trial, showing that the FRP had a striking value in predicting heart attacks, above what can be achieved with any of the tools currently used in clinical practice.

The team hope that this powerful technology will enable a greater number of people to avoid a heart attack, and plan to roll it out to health care professionals in the next year, with the hope that it will be included in routine NHS practice alongside CCTA scans in the next 2 years.

The senior author said: "Just because someone's scan of their coronary artery shows there's no narrowing, that does not mean they are safe from a heart attack.

"By harnessing the power of AI, we've developed a fingerprint to find 'bad' characteristics around people's arteries. This has huge potential to detect the early signs of disease, and to be able to take all preventative steps before a heart attack strikes, ultimately saving lives. We genuinely believe this technology could be saving lives within the next year."