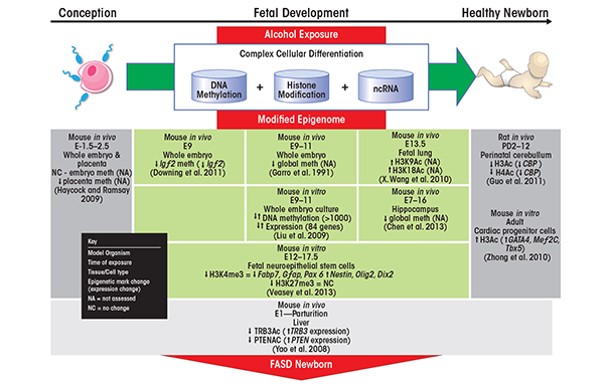 When a mother drinks alcohol during pregnancy, even a small dose, she can increase the chances that the next three generations may develop alcoholism, according to a new study from Binghamton University.

A research team was the first to investigate the effects of alcohol consumption during pregnancy on alcohol-related behavior (consumption and sensitivity to the effect of alcohol) on generations that were not directly exposed to alcohol in the uterus during the pregnancy.

Pregnant rats received the equivalent of one glass of wine, four days in a row, at gestational days 17-20, the equivalent of the second trimester in humans. Juvenile male and female offspring were then tested for water or alcohol consumption.

Adolescent males were tested for sensitivity to alcohol by injecting them with a high-alcohol dose, which made them unresponsive (drunk on their back), and measuring the time it took them to recover their senses (back on their four paws). The results suggest that if a mother drinks during pregnancy, even just a little bit, she increases the risk that her progeny will become alcoholic.

“Our findings show that in the rat, when a mother consumes the equivalent of one glass of wine four times during the pregnancy, her offspring and grand-offspring, up to the third generation, show increased alcohol preference and less sensitivity to alcohol,” said the author. “Thus, the offspring are more likely to develop alcoholism. This paper is the first to demonstrate trans-generational effects of alcohol consumption during pregnancy on alcohol-related behavior in offspring.”

The study, “Trans-generational transmission of the effect of gestational ethanol exposure on ethanol use-related behavior,” was published in Alcoholism: Clinical and Experimental Research.