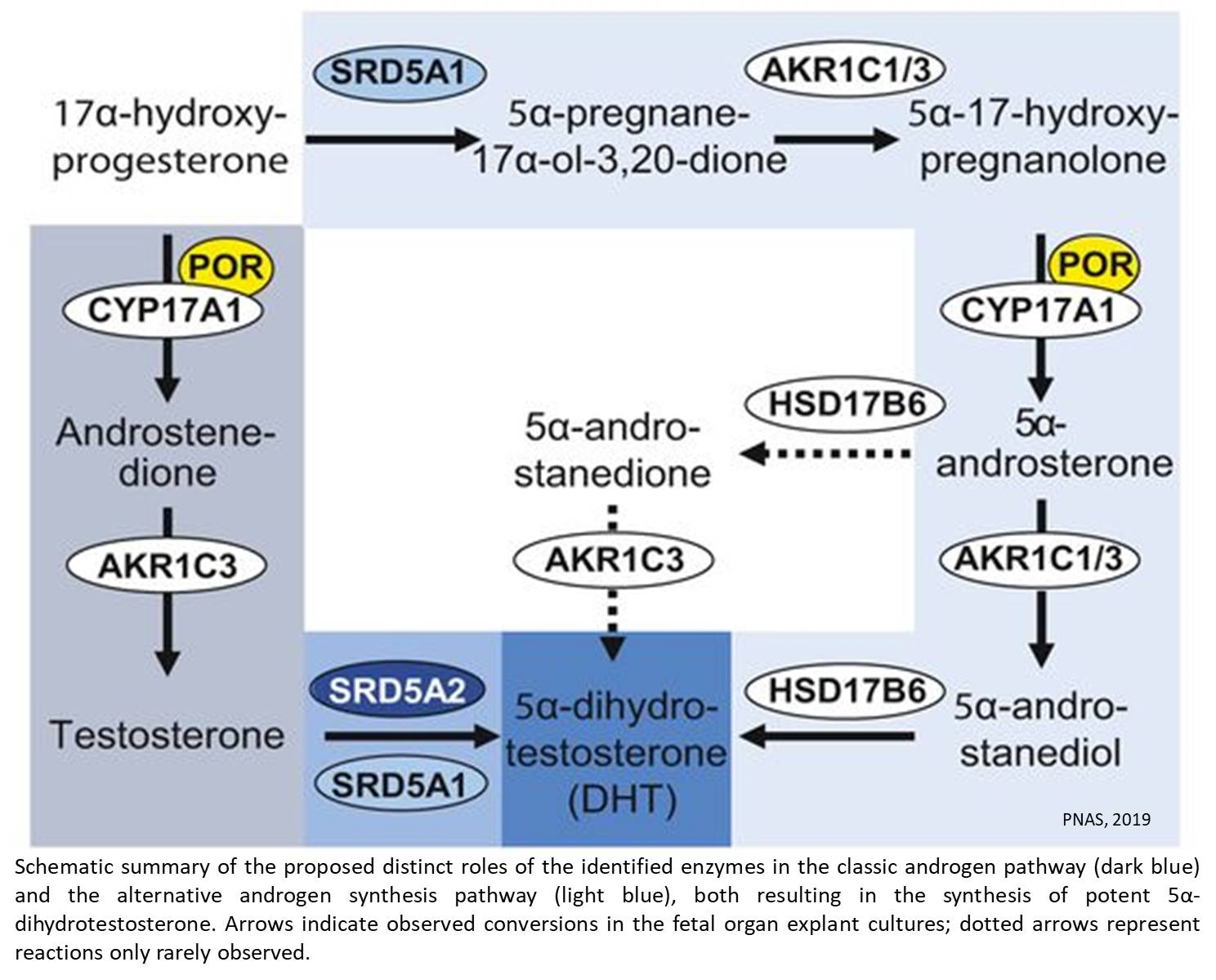 Researchers have made a connection between the way baby wallabies produce male hormones and how some human girls are born with genitalia that resemble those of a boy.

The research published in PNAS shows that an alternative pathway to the production of active male hormones - previously identified in the tammar wallaby pouch young - is present and active during human fetal development.

Analyzing urine from newborn human babies, the team showed this alternative pathway is particularly active when newborn girls are born with a disorder - congenital adrenal hyperplasia (CAH) - in which their genitalia resemble that of a boy.

CAH is an inherited condition caused by mutations in genes that code enzymes involved in making steroid hormones in the adrenal glands. The adrenal glands are cone-shaped organs that sit on top of each kidney. They make a number of hormones necessary for healthy body function. In people with CAH, the adrenal glands cannot make enough of a hormone called cortisol. As they start working harder in attempts to make more cortisol they increase in size.

Babies with CAH are born with a number of physical changes. Their adrenal glands are often larger than normal, even at birth. Girls with CAH may be born with external sex organs that appear more masculine than they should. If not treated, both boys and girls will develop early sexual characteristics, well before normal puberty should begin.

"CAH is an inherited disorder in which the overproduction of male hormones results in a newborn baby girl with CAH having a clitoris resembling a penis, and often at first look their genitalia appear to look male.

"We hypothesized that this is due to an alternative androgen pathway to DHT not depending on the formation of testosterone. This pathway has previously been shown to exist in the tammar wallaby pouch young, but never in humans."

Another author  added: "Using organ cells from the early phases of human fetal development, we could show that this proposed alternative pathway is present and active early during development, with contributions from the adrenal glands, the gonads and genital skin."

The team collected urine from newborn babes with CAH and healthy babies and could show that the babies with CAH still excreted large amounts of alternative pathway steroids for the first few weeks after birth.

Another author said: "In test tube experiments, we provided additional quantitative evidence that the alternative pathway is more important than the classic androgen pathway for the development of male characteristics in girls with CAH.

"Taken together, our results show that the alternative androgen pathway is present and active during human fetal development and that it has a key role in the development of male physical characteristics of the external genitalia of girls with CAH."

Another author added: "This is the first time that direct evidence has been provided for the existence of the alternative androgen pathway in the human fetus during the major time period when the internal and external genitalia are formed."

This first of its kind research, which took over a decade to complete, focussed on one certain type of CAH (CAH variant P450 oxidoreductase deficiency). However the researchers say that it is very likely that the findings also apply to a much more common CAH variant (21-hydroxylase deficiency), which affects one in 12,000 babies born in the UK.

The senior author added: "Our findings show that the alternative androgen pathway is a dominant contributor if not the driver of male hormone excess that results in the development of male physical characteristics of external genitalia in newborn girls with CAH."

The senior author concludes: "The findings provide a fundamental insight into how nature works and how sexual development occurs during the fetal period and which hormones and pathways are involved in androgen production both in normal pregnancies and in pregnancies with CAH children.

"This might, with further research, result in finding better solutions to prevent the development of male physical characteristics of external genitalia in newborn girls with CAH."