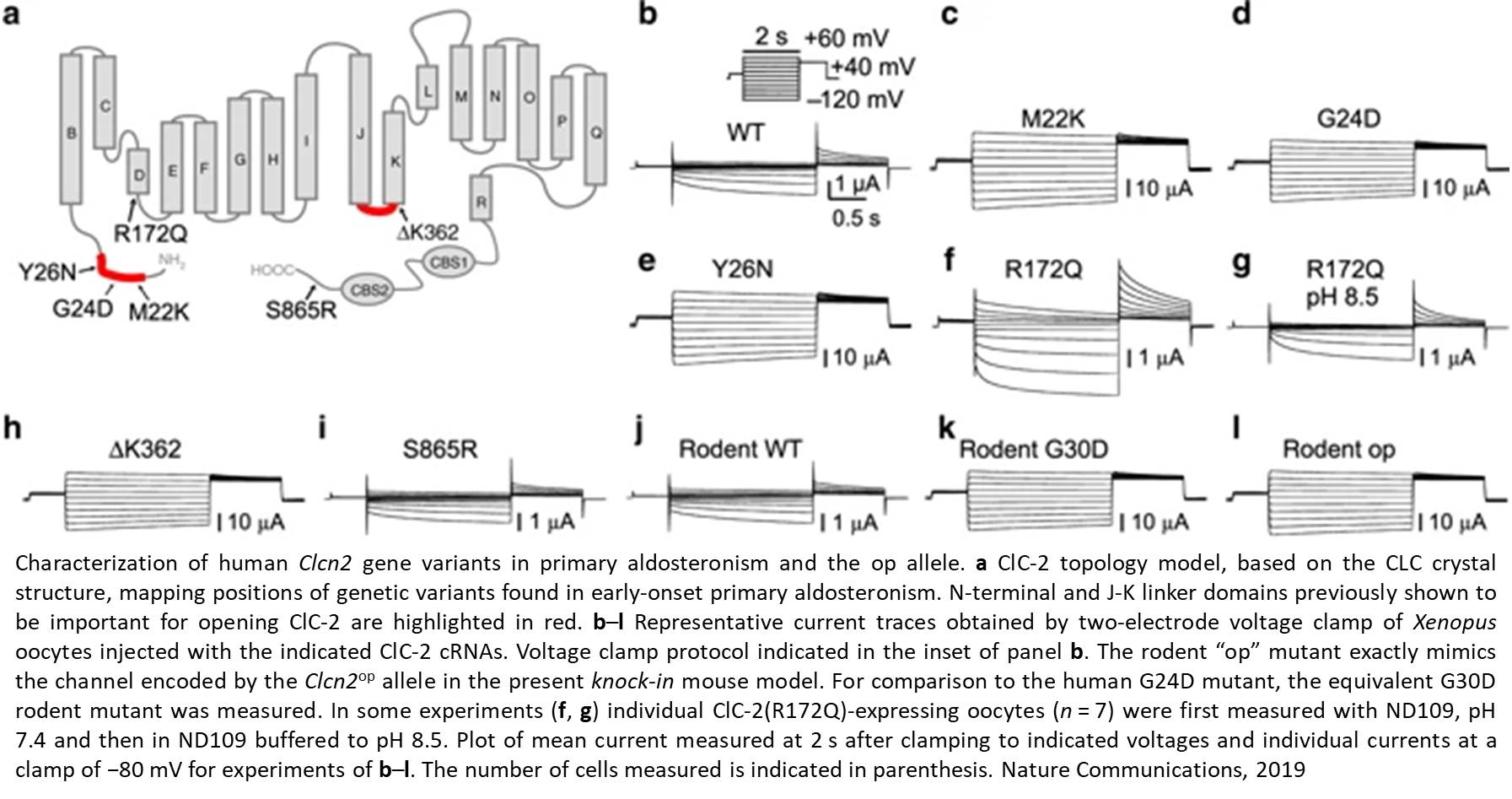 When the adrenal gland produces too much aldosterone, this often leads to high blood pressure and kidney damage (hyperaldosteronism). It has only recently emerged that several patients harbor a mutation in the gene for the ClC-2 chloride channel. Researchers have now been able to show for the first time how the altered channels cause the disease. Their results are reported in the journal Nature Communications.

The steroid hormone aldosterone, in concert with other mechanisms, controls our blood pressure. It is secreted by the adrenal glands and regulates the water and salt balance in the body. Adrenal glands in patients affected by hyperaldosteronism produce excessive amounts of aldosterone, which leads to excessive sodium retention which in turn increases the excretion of potassium. In the end, this leads to abnormally high blood pressure, 'arterial hypertension'. The combination of high aldosterone concentration and high blood pressure often results additionally in kidney damage.

The pathological mechanisms of the disease, also known as Conn syndrome, remained incompletely understood. In 2018, scientists found mutations in the ClC-2 chloride channel in patients affected by this syndrome. To date, a total of six different mutations have been described (published in Nature Genetics 2018). However, the pathway leading from the mutations to aldosterone overproduction had remained unclear - until researchers generated and analyzed a specific mouse model.

The team initially investigated all known aldosteronism-causing ClC-2 mutations in vitro. They found that all these mutations drastically increased the flow of chloride through the channel.

To examine the hypothesis that increased chloride flow through ClC-2 causes hyperaldosteronism, the researchers then developed a mouse model in which ClC-2 was activated by an 'artificial' mutation that had not been reported for patients. The genetically modified mice exhibited enormously increased chloride currents in aldosterone-secreting cells, which indirectly led to a large increase in aldosterone concentration in the blood of those rodents. Just like in patients, this resulted in abnormally elevated blood pressure and secondarily reduced activity of renin, a hormone that normally boosts aldosterone production. In addition to proving that an increase in Cl- currents in adrenal gland cells leads to hyperaldosteronism, the researchers investigated the pathological pathway in great detail.

"We have seen how the channel is constantly open due to these mutations, which greatly changes the electrical voltage across the membrane of the hormone-producing cell. This leads to an influx of calcium, which, in turn, causes overproduction of aldosterone," explains the author.

"We have been able to show step by step what exactly happens in the organism due to the mutated chloride channel in our model for the first time," said the biologist. "In this respect, our work has excellently complemented and expanded the human genetic findings."

The mouse model developed is the first in-vivo model that faithfully models all symptoms of the disease. Therefore, it is the perfect model to investigate the pathological mechanisms of hyperaldosteronism and to identify secondary effects such as long-term damage. The researchers were already able to detect slight kidney damage, but they hope more effects will be discovered: "At the moment, we assume that a constitutively open chloride channel could also impact other organs," says the senior author. Unfortunately, this is still a grey area in medicine, although the long-term consequences are highly relevant for patients. "Our mouse model can definitely help to clarify the situation. This reaffirms once again, how relevant basic research can be for clinical applications."