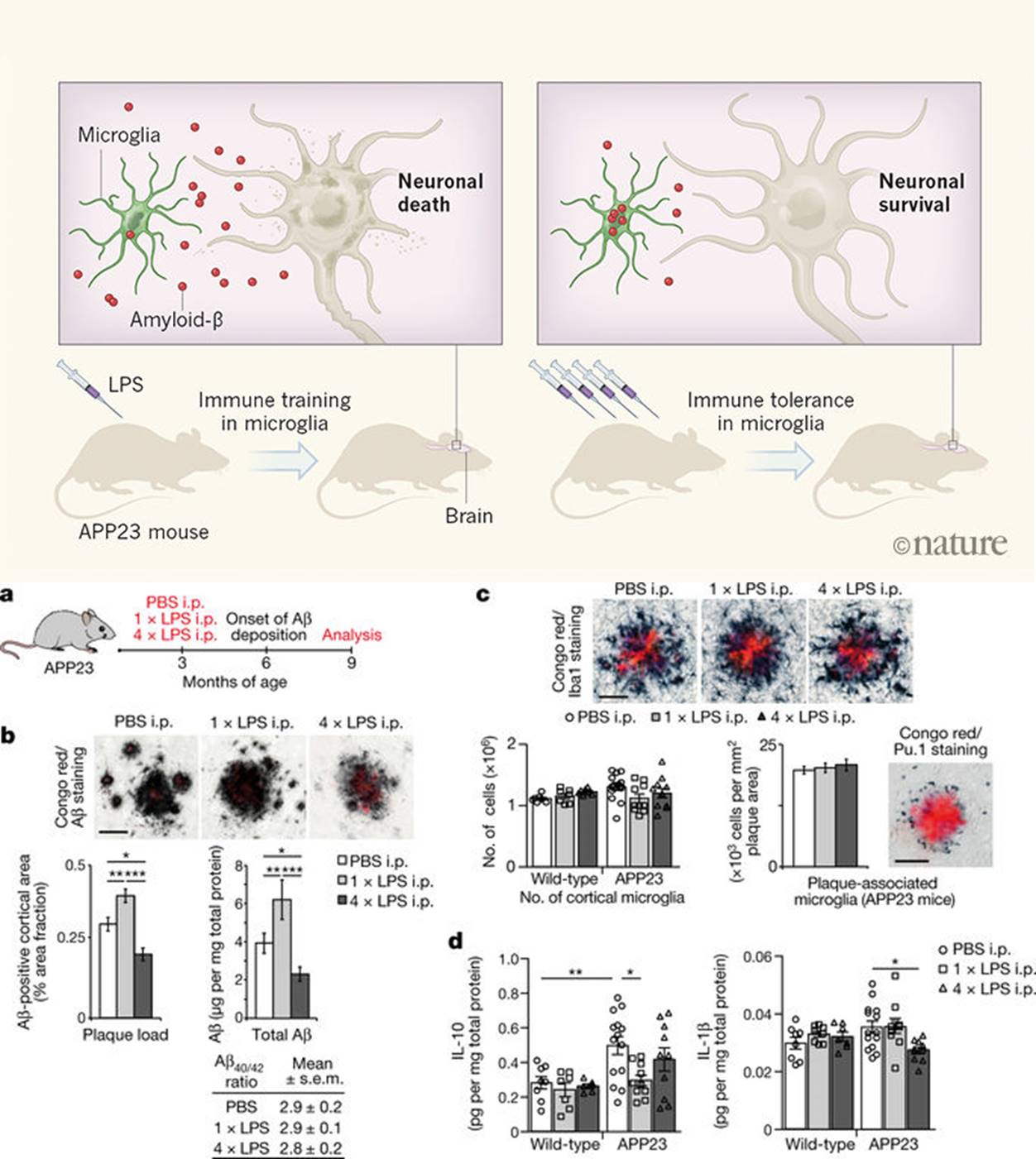 Inflammatory reactions can change the brain's immune cells in the long term - meaning that these cells have an 'immunological memory'. This memory may influence the progression of neurological disorders that occur later in life, and is therefore a previously unknown factor that could influence the severity of these diseases according to scientists in the journal Nature.

Microglia are immune cells that only occur in the brain. They protect the brain by cleansing it of intruders and toxic substances. However, in certain situations they can also cause damage. Therefore, they have long been suspected of playing a central role in neurodegenerative diseases.

As microglia are very long-lived, the scientists were keen to find out whether environmental factors change these immune cells over time and what effect this can have on brain health. "Epidemiological studies have shown that infectious diseases and inflammation suffered during a life-time can affect the severity of Alzheimer's disease much later in life. We therefore asked ourselves whether an immunological memory in these long-lived microglia could be communicating this risk," explains the study lead.

In order to address this question, researchers triggered in-flammation in mice, outside their brains; it was already known that such an inflammation can stimulate an immune reaction in the brain. However, it was not clear whether microglia might be able to remember a previous inflammation. As it turned out: Depending on how often the scientists repeated this process, they were able to induce two different states in the microglia: "training" and "tolerance". The first inflammatory stimulus trained the microglia, causing them to react more strongly to the second. However, after a fourth stimulus, tolerance had occurred and the microglia barely responded.

Next, the researchers investigated how microglia training and tolerance affected the formation of amyloid plaques in the long term. Such "plaques" are characteristic toxic deposits that accumulate in the brains of patients with Alzheimer's disease. In a mouse model of Alzheimer's pathology, the scientists observed that trained microglia amplified the formation of plaques even months after their immunological memory had been triggered, thus causing the disease to become more severe. In contrast, tolerant microglia reduced plaque load. The scientists also noticed similar effects in a mouse model of stroke.

In order to understand these effects more precisely, researchers investigated epigenetic changes in the microglia, i.e. chemical modifications to the DNA or its packaging proteins that cause certain genes to become more or less active. As epigenetic modifications are very stable, the researchers saw in them a possible cause for the long-term behavioral changes exhibited by the microglia. This hypothesis turned out to be correct: even many months after the initial immune stimulus, both the trained and the tolerant microglia showed specific epigenetic changes and corresponding differences in gene activation. This molecular reprogramming changed important functions in the microglia, such as their ability to remove amyloid plaques. And this affected Alzheimer's pathology.

"It is possible that also in humans, inflammatory diseases that primarily develop outside the brain could trigger epigenetic reprogramming inside the brain," says the author. Both infections and diseases such as diabetes or arthritis are associated with inflammatory reactions and are known risk factors for Alzheimer's disease. The brain's immunological memory - epigenetically modified microglia - is one possible explanation for this effect. Therefore, researchers are now investigating the conditions under which microglia undergo epigenetic changes in humans and looking at the therapeutic possibilities that may arise from this.