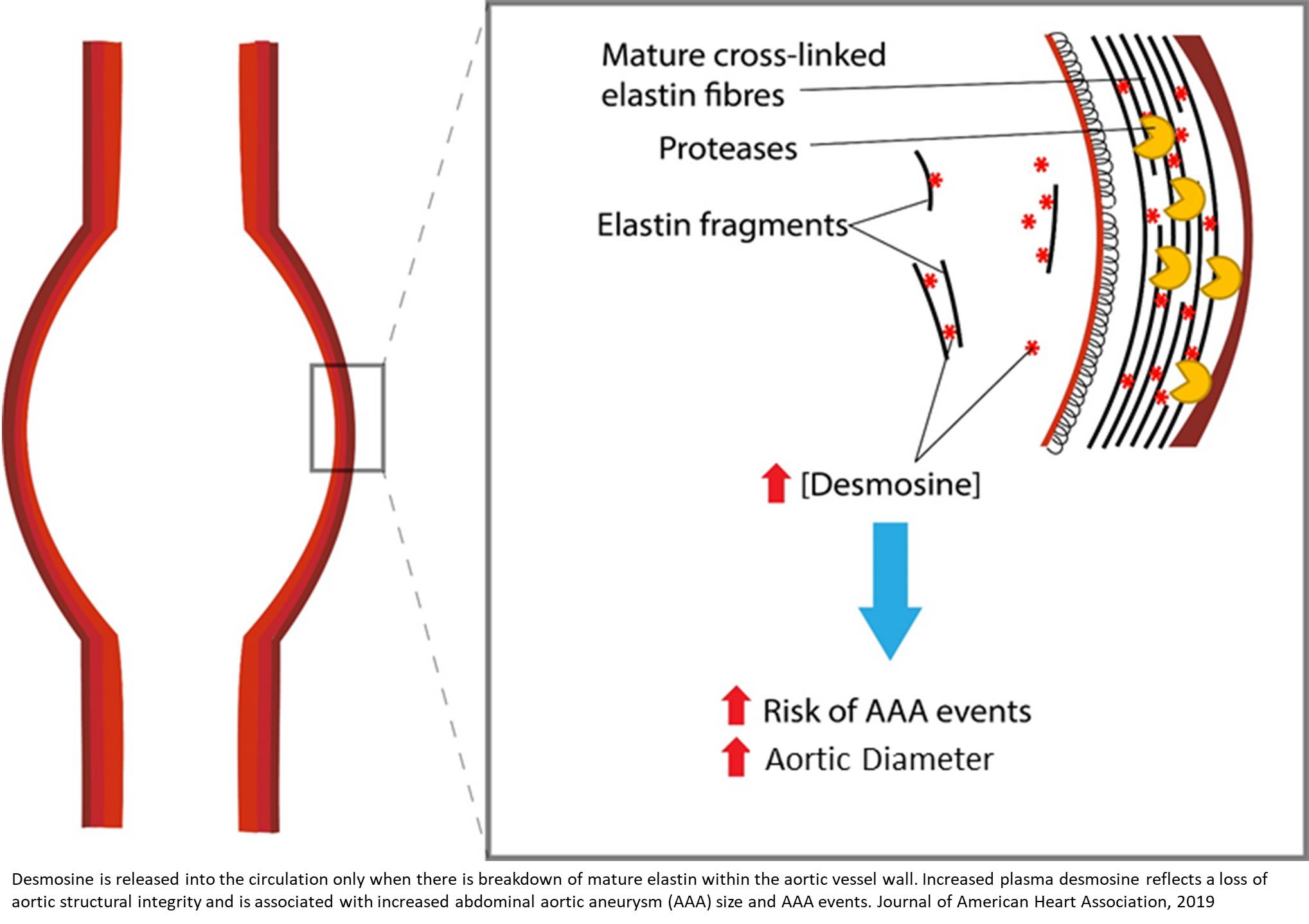 It is the ‘silent killer’ that claimed the life of Albert Einstein and affects 1% of men over the age of 65, but researchers believe they may be able to reduce the number of fatalities caused by abdominal aortic aneurysms.

Aneurysms are the swelling and weakening of the arterial wall. Aortic aneurysms occur in the aorta, which delivers blood from the heart to organs. Aneurysms are often called a silent killer, because patients can display no symptoms until the aneurysm bursts. Around 80% of all patients with a ruptured aneurysm die from the condition.

A team of researchers have devised a test that detects the presence of desmosine, an amino acid that diseased aortas release into the blood and urine. They believe this can improve the diagnosis and monitoring of aortic aneurysms while possibly aiding effort to develop new therapies to slow down their progression.

Men aged 65 and over are most at risk and may be invited for ultrasound screening. If an aortic aneurysm is detected, they will be asked to attend regular follow up checks but, as aneurysms do not expand at a linear rate, this means rapid growth between screenings may be missed.

Furthermore, the size of an aneurysm does not always correlate to how close it is to rupturing. However, the researchers believe that measuring the level of desmosine is a more effective way of identifying which patients are in most urgent need of treatment.

The senior author said, “At the moment, patients are offered surgery when the aneurysm reaches a size where it is felt to be in danger of rupturing. The problem is that aortic aneurysms can progress quite unpredictably and rapidly between tests. Sometimes they stay the same for a long time then have sudden expansion and they can also rupture when not of a particularly significant size.

“All this means we need to find a better way to detect and monitor aneurysms as it is a terrible amount of uncertainty for patients and their families to live with. We established that desmosine was released into the blood when this disease was present so we looked at whether testing for this might add to the screening.

“Looking at a retrospective collection of samples from aneurysm patients, we found that not only was this effective in detecting aneurysms, it improved predicting complications and outcomes. This could potentially help to save lives by picking up danger signs missed by the current screening programme and identifying which patients should be offered surgery.”

Desmosine derives from elastin protein. As suggested by its name, elastin provides blood vessels with their unique elastic character to expand and stretch. When someone develops an aneurysm, this protein gets broken down and is released into blood and urine.

The team checked the desmosine levels of patients with aneurysms ranging from the very mild to extremely severe. They found it was not just an effective indicator of the size of the aneurysm but also the likelihood of the patient developing complications.

The principal investigator who developed the desmosine assay, said, “Where available, screening programmes have helped reduce the number of fatalities but it is quite resource-intensive. It is potentially more cost-effective and patient-friendly to go to your GP for a simple blood test rather than going to hospital for an ultrasound.

“More importantly, our test has shown to be more effective in predicting outcomes than size alone so there is the potential to save lives.”

At the moment there is no medical intervention known to slow the progression of aneurysms but the authors believe the test they have developed can help to guide the development of therapies through clinical trials by giving faster and clearer readings of the levels of desmosine and therefore aortic destruction.

“Next we want to test this research in women who experience a higher mortality rate event though they are less likely to be diagnosed with an aneurysm,” continued the author. “It may also prove significant for people with genetic diseases that lead to diseased aortic walls. The bottom line is that in any disease of the aorta we think this amino acid may have a role to play in detection, prediction and follow up.”

The research was published by the Journal of the American Heart Association.

How to increase therapeutic efficacy of stem cells