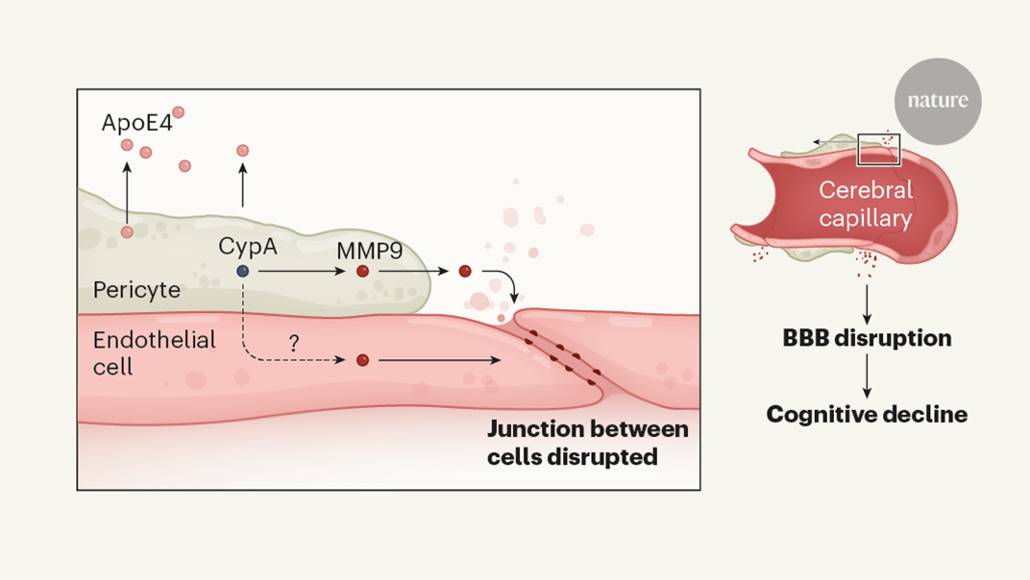 New research reveals how APOE4, a genetic culprit for Alzheimer's disease, triggers leaks in the brain's plumbing system, allowing toxic substances to seep into the brain areas responsible for memory encoding and other cognitive functions.

The damage is linked to future problems in learning and memory, even when the disease's signature sticky plaques have not appeared. The findings suggest that the smallest blood vessels in the brain, which form the blood-brain barrier, might be a potential target for early treatment. The study appears in Nature.

Severe damage to vascular cells called pericytes was linked to more severe cognitive problems in APOE4 carriers. APOE4 seems to speed up breakdown of the blood-brain barrier by activating an inflammatory pathway in blood vessels, which is associated with pericyte injury.

Scientists have long known that the APOE4 gene - which occurs in up to 14 percent of the population - increases the probability of developing Alzheimer's disease. Until now, it's been unclear how different pathologies determine the course of the disease in its early stages, or what underlying mechanisms lead to cognitive decline in APOE4 carriers.

Previous research from the lab shows that people who develop early memory problems also experience the most leakage in their brain's blood vessels - independent of amyloid plaque or tau, two common contributors to Alzheimer's. The leakage starts when cells called pericytes, which line the walls of blood vessels in the brain and maintain blood-brain barrier integrity, are damaged. These injured pericytes can be detected with a unique biomarker, developed by the lab in 2015, which shows up in cerebrospinal fluid.

For this study, scientists used standard memory tests to check the participants' cognitive abilities and their neuropsychological performance. They also used advanced neuroimaging and employed the biomarker that indicates damage to the brain's blood vessels.

In participants who had the APOE4 gene, researchers found damaged capillaries in the brain's memory center, the hippocampus and medial temporal lobe. The damage correlated with increased levels of a protein that causes inflammation, cyclophilin A - an early sign of the disease in people already at higher risk of developing Alzheimer's.

High baseline levels of the BBB pericyte injury biomarker soluble PDGFRβ in the cerebrospinal fluid predicted future cognitive decline in APOE4 carriers but not in non-carriers, even after controlling for amyloid-β and tau status, and were correlated with increased activity of the BBB-degrading cyclophilin A-matrix metalloproteinase-9 pathway in cerebrospinal fluid.