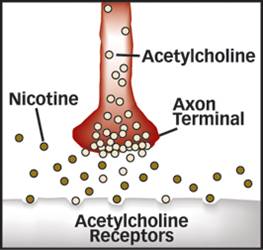 A small group of brain cells moderates whether an individual is hungry or full. In mouse studies, when these cells are impaired, the animal eats constantly and becomes obese. On the other hand, when the cells enhance their activity, the mice eat little and lose weight. The study, published today in Nature by researchers opens the possibility of developing drugs to help treat obesity, a major health problem around the world, as well as other eating disorders.

"How the brain controls appetite has been mostly focused on the hypothalamus," said senior author. The hypothalamus is a brain region involved in a variety of bodily functions, such as temperature regulation, control of food and water intake, sexual behavior and reproduction and mediation of emotional responses.

"In addition, acetylcholine, a modulator of brain activity, has been proposed to play a role in appetite control, but this role had not been explored until now," said the author.

To determine whether acetylcholine helps control the appetite in mice, the researchers made genetic modifications that killed only the cells in the basal forebrain that produce acetylcholine.

"Without acetylcholine, the mice seem hungry all the time; they are insatiable," said the author. "If you limit the amount of food, they will lose weight equally to the mice with acetylcholine in their basal forebrain."

"This study has allowed us to better understand the brain circuit that controls appetite," said the auhtor. "The hypothalamus receives clues from the senses; for instance, the smells and appetizing looks of homemade food. It also receives internal clues, such as the levels of blood sugar and insulin in the body. The hypothalamus processes all these information to regulate feeding. What we have found here is that acetylcholine can influence the hypothalamic circuit and regulate satiety."