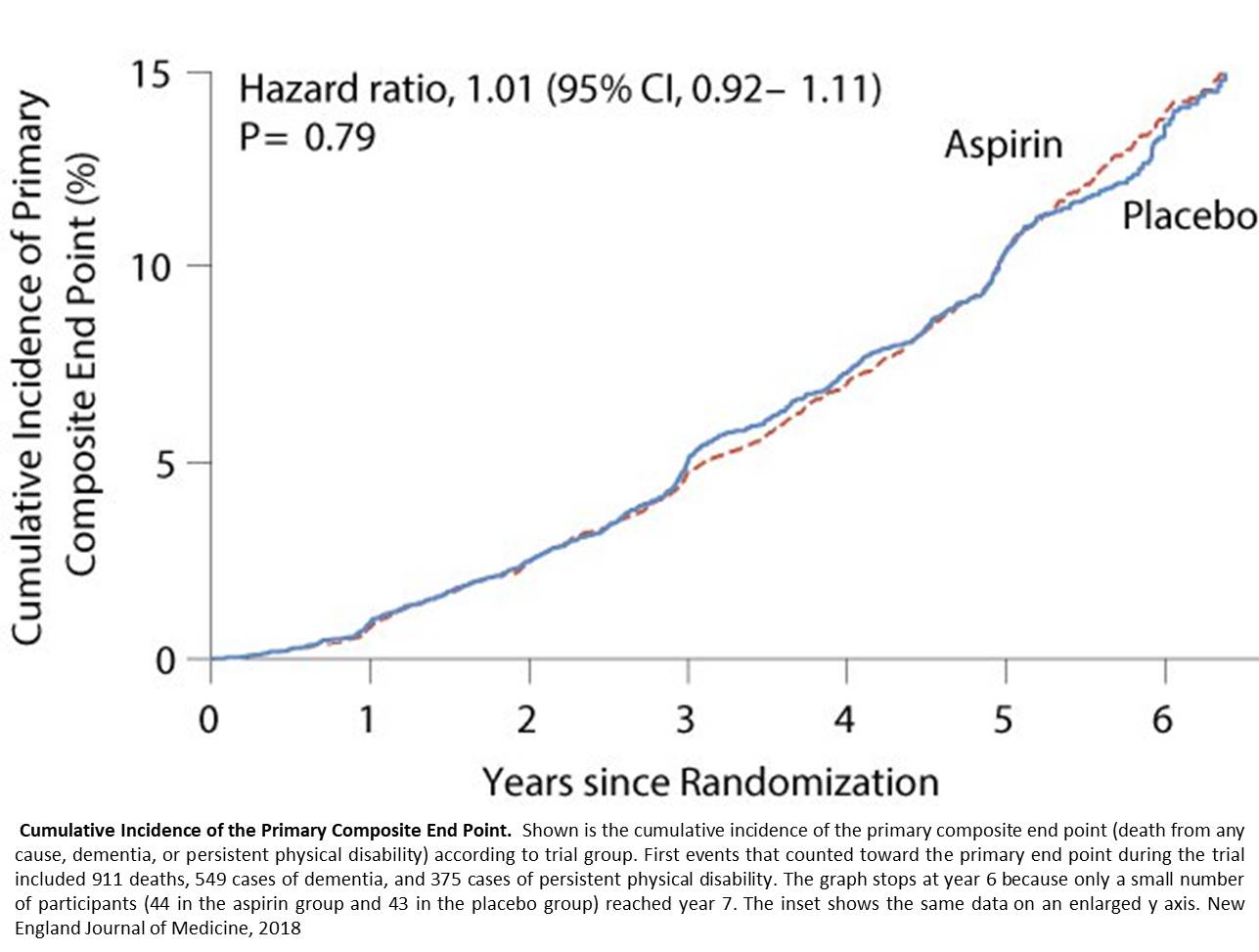 In a large clinical trial to determine the risks and benefits of daily low-dose aspirin in healthy older adults without previous cardiovascular events, aspirin did not prolong healthy, independent living (life free of dementia or persistent physical disability). Risk of dying from a range of causes, including cancer and heart disease, varied and will require further analysis and additional follow-up of study participants. These initial findings from the ASPirin in Reducing Events in the Elderly (ASPREE) trial, partially supported by the National Institutes of Health, were published in three papers in The New England Journal of Medicine.

ASPREE is an international, randomized, double-blind, placebo-controlled trial that enrolled 19,114 older people (16,703 in Australia and 2,411 in the United States). The study began in 2010 and enrolled participants aged 70 and older; 65 was the minimum age of entry for African-American and Hispanic individuals in the United States because of their higher risk for dementia and cardiovascular disease. At study enrollment, ASPREE participants could not have dementia or a physical disability and had to be free of medical conditions requiring aspirin use. They were followed for an average of 4.7 years to determine outcomes.

"Clinical guidelines note the benefits of aspirin for preventing heart attacks and strokes in persons with vascular conditions such as coronary artery disease," said NIA Director. "The concern has been uncertainty about whether aspirin is beneficial for otherwise healthy older people without those conditions. This study shows why it is so important to conduct this type of research, so that we can gain a fuller picture of aspirin's benefits and risks among healthy older persons."

In the total study population, treatment with 100 mg of low-dose aspirin per day did not affect survival free of dementia or disability. Among the people randomly assigned to take aspirin, 90.3 percent remained alive at the end of the treatment without persistent physical disability or dementia, compared with 90.5 percent of those taking a placebo. Rates of physical disability were similar, and rates of dementia were almost identical in both groups.

The group taking aspirin had an increased risk of death compared to the placebo group: 5.9 percent of participants taking aspirin and 5.2 percent taking placebo died during the study. This effect of aspirin has not been noted in previous studies; and caution is needed in interpreting this finding. The higher death rate in the aspirin-treated group was due primarily to a higher rate of cancer deaths. A small increase in new cancer cases was reported in the group taking aspirin but the difference could have been due to chance.

Significant bleeding--a known risk of regular aspirin use--was also measured. The investigators noted that aspirin was associated with a significantly increased risk of bleeding, primarily in the gastrointestinal tract and brain. Clinically significant bleeding--hemorrhagic stroke, bleeding in the brain, gastrointestinal hemorrhages or hemorrhages at other sites that required transfusion or hospitalization--occurred in 361 people (3.8 percent) on aspirin and in 265 (2.7 percent) taking the placebo.

As would be expected in an older adult population, cancer was a common cause of death, and 50 percent of the people who died in the trial had some type of cancer. Heart disease and stroke accounted for 19 percent of the deaths and major bleeding for 5 percent.

"The increase in cancer deaths in study participants in the aspirin group was surprising, given prior studies suggesting aspirin use improved cancer outcomes," said another author. "Analysis of all the cancer-related data from the trial is under way and until we have additional data, these findings should be interpreted with caution."

"Continuing follow-up of the ASPREE participants is crucial, particularly since longer term effects on risks for outcomes such as cancer and dementia may differ from those during the study to date," said another author. "These initial findings will help to clarify the role of aspirin in disease prevention for older adults, but much more needs to be learned. The ASPREE team is continuing to analyze the results of this study and has implemented plans for monitoring participants."

As these efforts continue, the authors emphasized that older adults should follow the advice from their own physicians about daily aspirin use. It is important to note that the new findings do not apply to people with a proven indication for aspirin such as stroke, heart attack or other cardiovascular disease. In addition, the study did not address aspirin's effects in people younger than age 65. Also, since only 11 percent of participants had regularly taken low-dose aspirin prior to entering the study, the implications of ASPREE's findings need further investigation to determine whether healthy older people who have been regularly using aspirin for disease prevention should continue or discontinue use.