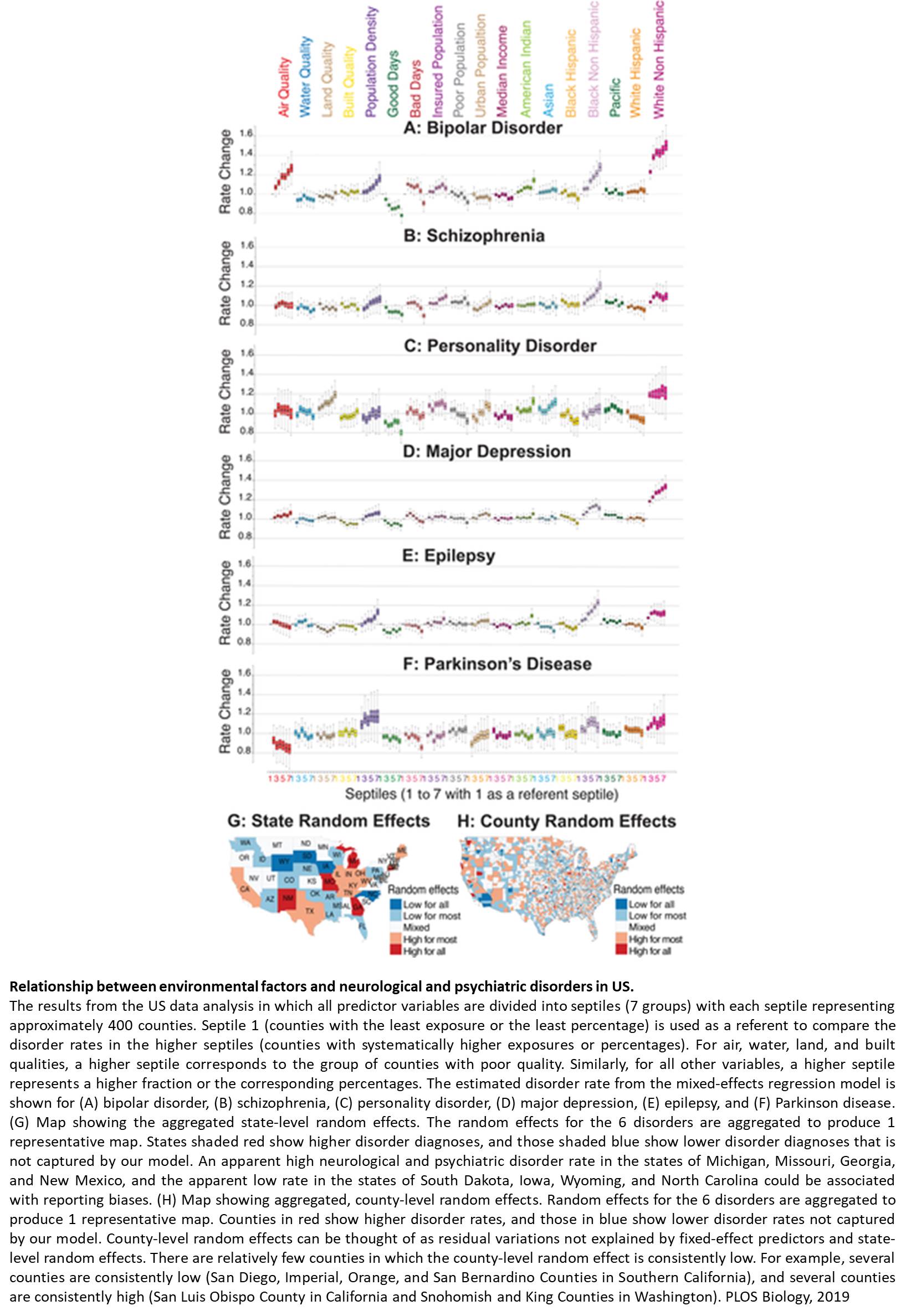 Researchers are increasingly studying the effects of environmental insults on psychiatric and neurological conditions, motivated by emerging evidence from environmental events like the record-breaking smog that choked New Delhi two years ago. The results of a new study publishing in the journal PLOS Biology by an international group of researchers using large data sets from the US and Denmark suggests a possible link between exposure to environmental pollution and an increase in the prevalence of psychiatric disorders.

The team found that poor air quality was associated with higher rates of bipolar disorder and major depression in both US and Danish populations. The trend appeared even stronger in Denmark, where exposure to polluted air during the first ten years of a person's life also predicted a more than two-fold increase in schizophrenia and personality disorders.

"Our study shows that living in polluted areas, especially early on in life, is predictive of mental disorders in both the United States and Denmark," said the first author of the new study. "The physical environment - in particular air quality - warrants more research to better understand how our environment is contributing to neurological and psychiatric disorders."

Although mental illnesses like schizophrenia develop due to a complex interplay of genetic predispositions and life experiences or exposures, genetics alone do not account entirely for variations in mental health and disease. Researchers have long suspected that genetic, neurochemical and environmental factors interact at different levels to affect the onset, severity and progression of these illnesses.

Growing evidence is beginning to provide insight into how components of air pollution can be toxic to the brain: Recent studies on rodents suggest that environmental agents like ambient small particulate matter (fine dust) travel to the brain through the nose and lungs, while animals exposed to pollution have also shown signs of cognitive impairment and depression-like behavioral symptoms. "We hypothesized that pollutants might affect our brains through neuroinflammatory pathways that have also been shown to cause depression-like signs in animal studies," said the study lead.

To quantify air pollution exposure among individuals in the United States, the University of Chicago team relied on the US Environmental Protection Agency's measurements of 87 air quality measurements. For individuals in Denmark, they used a national pollution register that tracked a smaller number of pollutants with much higher spatial resolution.

The researchers then examined two population data sets, the first being a U.S. health insurance claims database that included 11 years of claims for 151 million individuals. The second dataset consisted of all 1.4 million individuals born in Denmark from 1979 through 2002 who were alive and residing in Denmark at their tenth birthday. Because Danes are assigned unique identification numbers that can link information from various national registries, the researchers were able to estimate exposure to air pollution at the individual level during the first ten years of their life. In the US study, exposure measurements were limited to the county level. "We strived to provide validation of association results in independent large datasets," said the first author.

The findings have not been without controversy. "This study on psychiatric disorders is counterintuitive and generated considerable resistance from reviewers," said the author. Indeed, the divided opinions of the expert reviewers prompted PLOS Biology to commission a special companion article from Prof. John Ioannidis of Stanford University (Ioannidis is unconnected with the study, but assisted the journal with the editorial process).

"A causal association of air pollution with mental diseases is an intriguing possibility. Despite analyses involving large datasets, the available evidence has substantial shortcomings and a long series of potential biases may invalidate the observed associations," says Ioannidis in his commentary. "More analyses by multiple investigators, including contrarians, are necessary."

The author also cautioned that the significant associations between air pollution and psychiatric disorders discovered in the study do not necessarily mean causation, and said that further research is needed to assess whether any neuroinflammatory impacts of air pollution share common pathways with other stress-induced conditions.