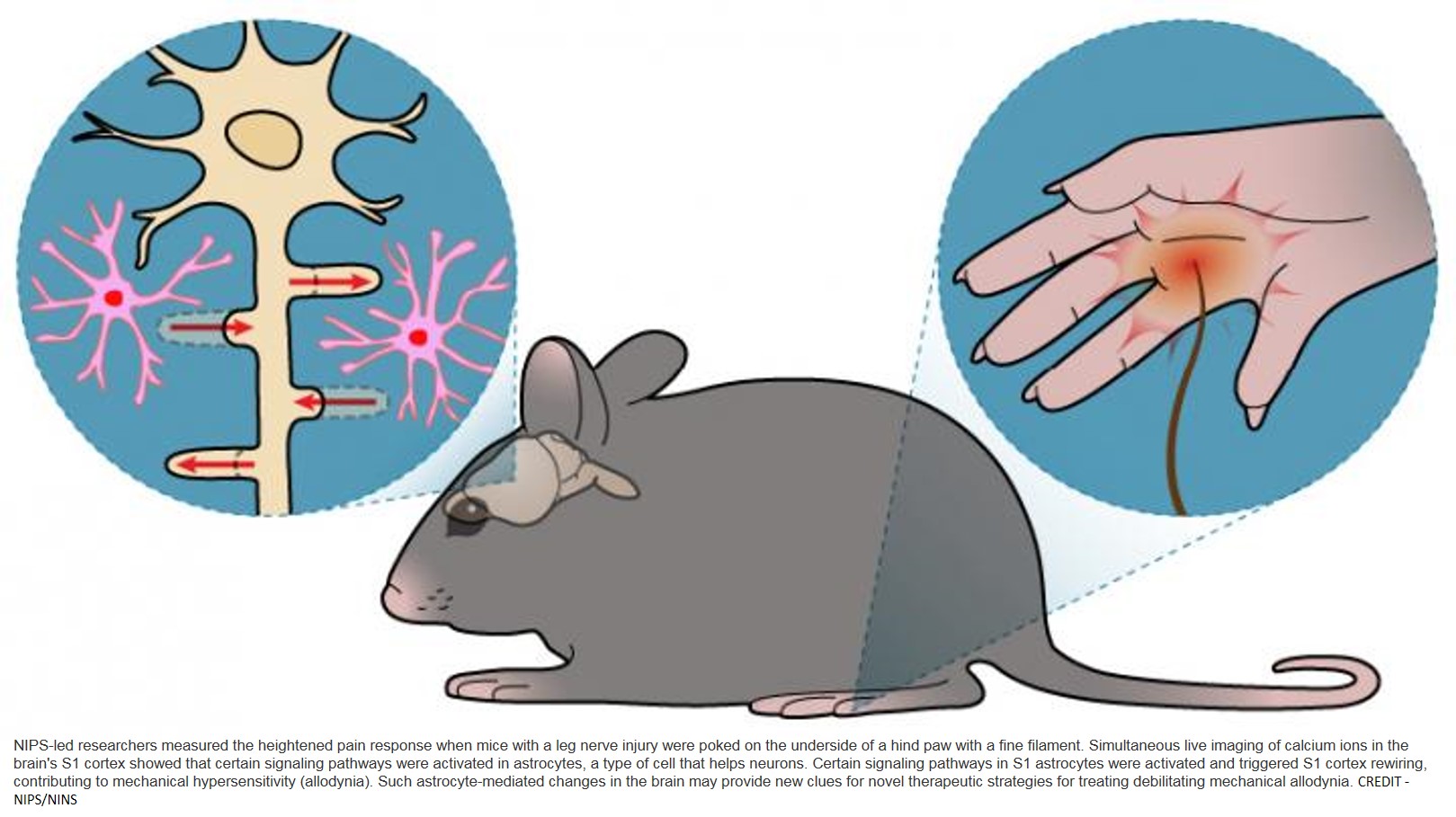 Pain comes in many forms; one is allodynia, which is pain that is greatly amplified by even the slightest sensations, such as light, touch, or warmth. Current treatments to alleviate allodynia are limited. The spinal cord and glial cells, which provide support and insulation between neurons and are the most abundant cell types in the central nervous system, are thought to play a crucial role in allodynia. However, the underlying cellular mechanisms of their involvement remained unsolved, until now.

An international team of researchers has identified a sequence of events in the S1 cortex, a remote region of the brain not directly affected by spinal cord injury, that contribute to sustained mechanical allodynia. The findings are to be reported in The Journal of Clinical Investigation.

"Direct manipulation of the S1 cortex has been shown to relieve neuropathic pain in humans and animals. This suggests the S1 cortex might act as a sort of central processing unit within the brain networks that mediate and/or sustain chronic neuropathic pain," study first author explains. "We hypothesized that S1 astrocytes, a type of glial cell, may show functional changes following peripheral nerve injury, resulting in mechanical allodynia."

The researchers tested the hypothesis by conducting a series of experiments in mice with a leg nerve injury. Thin filaments were applied to the underside of a back paw, and the paw response to each application was measured. At the same time, live calcium ion imaging was used to track the corresponding activities of astrocytes in the S1 cortex.

This S1 astrocyte reactivation was evident only during the first week after injury and correlated with the temporal changes in S1 extracellular glutamate levels and dendritic spine turnover. Blocking the astrocytic mGluR5-signaling pathway suppressed mechanical allodynia, while activating this pathway in the absence of any peripheral injury induced long-lasting (>1 month) allodynia.

The results indicate that this "reawakening" of S1 astrocytes is a key trigger for S1 circuit rewiring, and that it contributes to neuropathic mechanical allodynia. "By revealing some of the underlying mechanisms, our study suggests that cortical changes may move beyond their utility as just diagnostic tools and serve as potential targets for therapeutics," corresponding author says. "Appreciation of these astrocyte-mediated changes in cortical synaptic connections requires a paradigm shift in our understanding of neuropathic pain pathophysiology; one that may result in novel therapeutic strategies for treating the debilitating effects of allodynia."