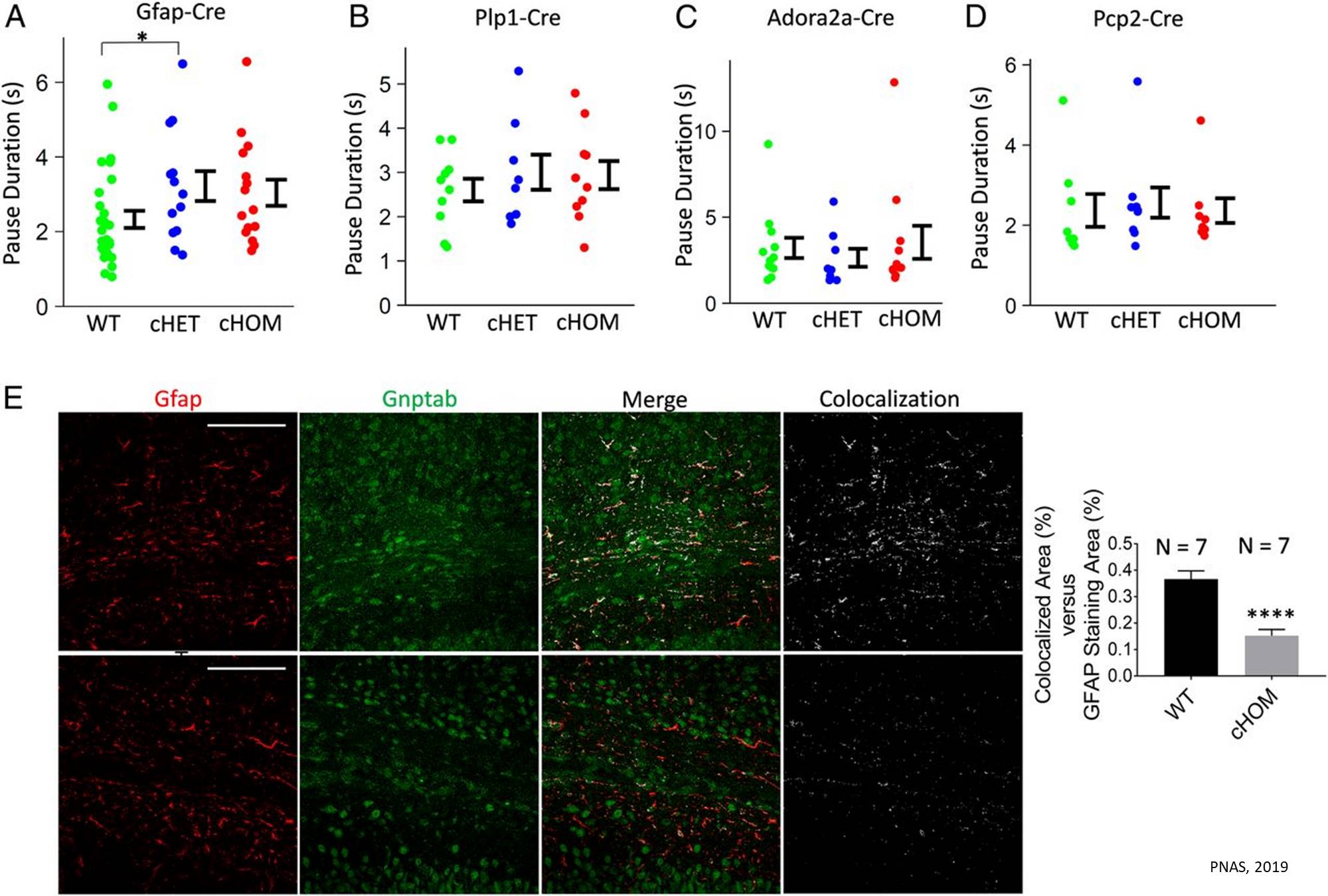 Researchers believe that stuttering - a potentially lifelong and debilitating speech disorder - stems from problems with the circuits in the brain that control speech, but precisely how and where these problems occur is unknown. Using a mouse model of stuttering, scientists report that a loss of cells in the brain called astrocytes are associated with stuttering. The mice had been engineered with a human gene mutation previously linked to stuttering. The study, which appeared online in the Proceedings of the National Academy of Sciences, offers insights into the neurological deficits associated with stuttering.

The loss of astrocytes, a supporting cell in the brain, was most prominent in the corpus callosum, a part of the brain that bridges the two hemispheres. Previous imaging studies have identified differences in the brains of people who stutter compared to those who do not. Furthermore, some of these studies in people have revealed structural and functional problems in the same brain region as the new mouse study.

Stuttering is characterized by pauses and repeated or prolonged sounds, syllables or words, which disrupt the normal flow of speech. People who stutter know what they want to say, but they have trouble saying it. The condition is most commonly seen in young children who typically outgrow the problem. However, for 1 in 4 children who experience early stuttering, the condition persists as a lifelong communication problem. It is estimated that as many as 1% of adults in the United States are affected by stuttering.

"The brain imaging studies of people who stutter are important, but those results can only take us so far," said the author. One challenge, he said, is that the imaging studies cannot decipher if the differences contribute to stuttering or are an effect of stuttering.

"By taking a genetic approach, we have been able to begin deciphering the neuropathology of stuttering, first at the molecular level by identifying genetic mutations, and now at the cellular level," added the author.

In this study, the researchers set out to identify changes in the brain brought on by the mutations in a gene called GNPTAB, one of the genes previously linked to stuttering. The scientists engineered this human stuttering mutation into the mice to create a mouse model. The mice with the GNPTAB mutation had long pauses in their stream of vocalizations, similar to those found in people with the same mutation. Like people who stutter, the mice were normal in all other ways, reinforcing earlier research that suggests that the mice can serve as a valid animal model for important features of this disorder.

The investigators next examined brain tissue from the mice and found a decrease in astrocytes, but not other cell types, in the animals with the genetic mutation compared to the mice without the mutation. Astrocytes play a critical role in supporting nerve cells by carrying out a wide range of functions, such as supplying nerve cells with oxygen and nutrients and providing structural support.

Containing as many as 200 million nerve fibers, the corpus callosum enables communication between the brain's left and right hemispheres, helping to integrate signals for processes that involve both hemispheres, such as physical coordination and use of language.

Follow-up experiments in which the GNPTAB human stuttering mutation was introduced into individual brain cell types--rather than the entire mouse--confirmed that the vocalization defect is specific to astrocytes. The mice did not have the stuttering-like vocalizations when the mutation was engineered into other types of brain cells.

All of the stuttering genes that have been identified over the past decade are involved in intracellular trafficking, the process that cells use to move proteins and other components to their correct locations within the cell. Defects in cellular trafficking have been linked to other neurological disorders, such as amyotrophic lateral sclerosis (ALS), Parkinson's disease, and Alzheimer's disease, suggesting that certain nerve cell pathways are particularly sensitive to impairment of this process. The research does not indicate, however, that persistent stuttering is an early indicator of these other disorders.

If future research confirms that stuttering in people with GNPTAB mutations derives from a loss of astrocytes in the brain, these findings could open the door to new therapeutic strategies for some people with persistent developmental stuttering by targeting associated molecular pathways and cells.