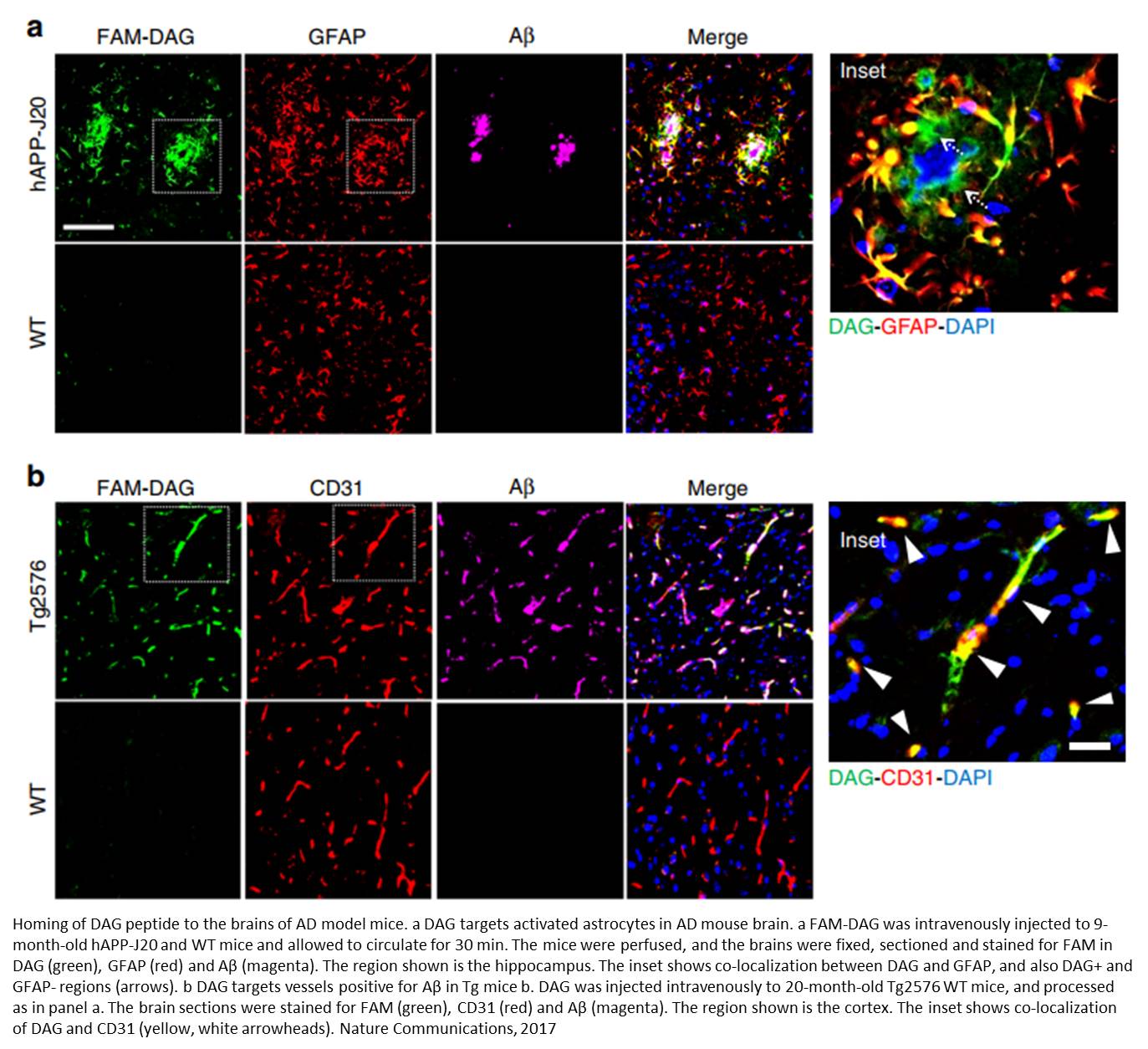 Researchers have identified a peptide that could lead to the early detection of Alzheimer's disease (AD). The discovery, published in Nature Communications, may also provide a means of homing drugs to diseased areas of the brain to treat AD, Parkinson's disease, as well as glioblastoma, brain injuries and stroke.

"Our goal was to find a new biomarker for AD," says lead author of the study. "We have identified a cyclic peptide, CDAGRKQKC (DAG) that recognizes a protein that is elevated in the brain blood vessels of AD mice and human patients. The DAG target, connective tissue growth factor (CTGF) appears in the AD brain before amyloid plaques, the pathological hallmark of AD."

"CTGF is a protein that is made in the brain in response to inflammation and tissue repair," explains the author. "Our finding that connects elevated levels of CTGF with AD is consistent with the growing body of evidence suggesting that inflammation plays an important role in the development of AD."

The research team identified the DAG peptide using in vivo phage display screening at different stages of AD development in a mouse model. In young AD mice, DAG detected the earliest stage of the disease. If the early appearance of the DAG target holds true in humans, it would mean that DAG could be used as a tool to identify patients at early, pre-symptomatic stages of the disease when treatments already available may still be effective.

"Importantly, we showed that DAG binds to cells and brain from AD human patients in a CTGF-dependent manner" says the author. "This is consistent with an earlier report of high CTGF expression in the brains of AD patients."

"Our findings show that endothelial cells, the cells that form the inner lining of blood vessels, bind our DAG peptide in the parts of the mouse brain affected by the disease," says senior author of the paper. "This is very significant because the endothelial cells are readily accessible for probes injected into the blood stream, whereas other types of cells in the brain are behind a protective wall called the blood-brain barrier. The change in AD blood vessels gives us an opportunity to create a diagnostic method that can detect AD at the earliest stage possible.

"But first we need to develop an imaging platform for the technology, using MRI or PET scans to differentiate live AD mice from normal mice. Once that's done successfully, we can focus on humans," adds the senior uthor .

"As our research progresses we also foresee CTGF as a potential therapeutic target that is unrelated to amyloid beta (Aβ), the toxic protein that creates brain plaques," says the author. "Given the number of failed clinical studies that have sought to treat AD patients by targeting Aβ, it's clear that treatments will need to be given earlier--before amyloid plaques appear--or have to target entirely different pathways.

"DAG has the potential to fill both roles -- identifying at risk individuals prior to overt signs of AD and targeted delivery of drugs to diseased areas of the brain. Perhaps CTGF itself can be a drug target in AD and other brain disorders linked to inflammation. We'll just have to learn more about its role in these diseases".