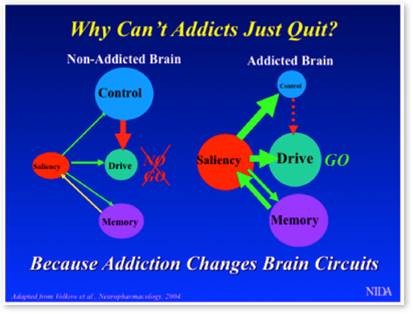 Quitting smoking is hard. Yet success is more likely with strong communication between parts of the brain that inhibit and execute automated behavior, report researchers in the journal JAMA Psychiatry.

Smoking becomes an automated behavior over time, said the first author on the study.

In the brain, the urge to smoke begins the same way your foot automatically moves to the gas pedal when a red stoplight turns green. "A pack-a-day smoker places a cigarette in their mouth a few hundred times a day over years," said the author. "It becomes automated."

One way the brain inhibits automated behavior is through a pathway called the inhibitory control network, which starts in the right inferior frontal gyrus and travels through the prefrontal cortex to the thalamus. Communication through this pathway is often disrupted in the brains of smokers. The researchers wanted to know if this pathway was involved when smokers attempted to quit.

The laboratory examined inhibitory control networks in the brains of 81 nicotine-dependent adults committed to trying a 10-week smoking cessation program. Before the program started, the researchers used functional MRI to monitor brain activity while patients were performing a task of inhibitory control. The patients were instructed to strike a computer key each time a colored circle appeared on screen, except on the rare occasion when a circle of a certain color appeared. A higher blood oxygenation level-dependent (BOLD) response in the inhibitory control circuit meant that the brain was using more resources to inhibit the automatic response of striking the key when the rare circle appeared.

After 10 weeks, about half of the smokers had quit successfully. Intriguingly, it turned out that they had lower BOLD responses in their inhibitory control networks before trying to quit. In particular, BOLD responses were lower in the right inferior frontal gyrus and right thalamus. They also had stronger functional connections between those regions. Patients who relapsed had scored just as well on the inhibition control task as those who quit successfully. It seemed that their automated behavior may have required more effort to inhibit.

The authors wondered if the same thing happened to smokers who had not committed to quitting. Specifically, could this pattern appear in smokers who were paid to quit for just an hour?

The group measured BOLD signals in 26 smokers performing the same task. This time, however, each person was then presented with an open pack of their preferred brand of cigarettes, a lighter, and an ashtray. They were paid one dollar for every six minutes they did not smoke, up to an hour. The idea was to give each person a small incentive to resist the temptation to smoke.

The results converged nicely. In general, the lower the BOLD response during the task of inhibitory control, the longer the person resisted smoking. Those who resisted temptation longer also had stronger functional connections in their inhibitory control networks.

This study is the first to link the strength of communication in a brain circuit that inhibits automated behavior with the ability to resist smoking.

This does not mean that smoking itself is the cause of the differences the researchers observed. Rather, this study was designed to learn how to better help smokers who want to quit. The group is now evaluating the potential of certain behavioral and pharmacological treatments that could strengthen communication in the inhibitory control pathway of people who smoke.

This work highlights that differences in biology can help explain why some smokers who are trying to resist smoking have more success than others.

"There are neurobiological mechanisms that are fundamental to learning new behaviors and also to stopping those that become automated, such as smoking," said the author.