Brain drowns in its own fluid after a stroke 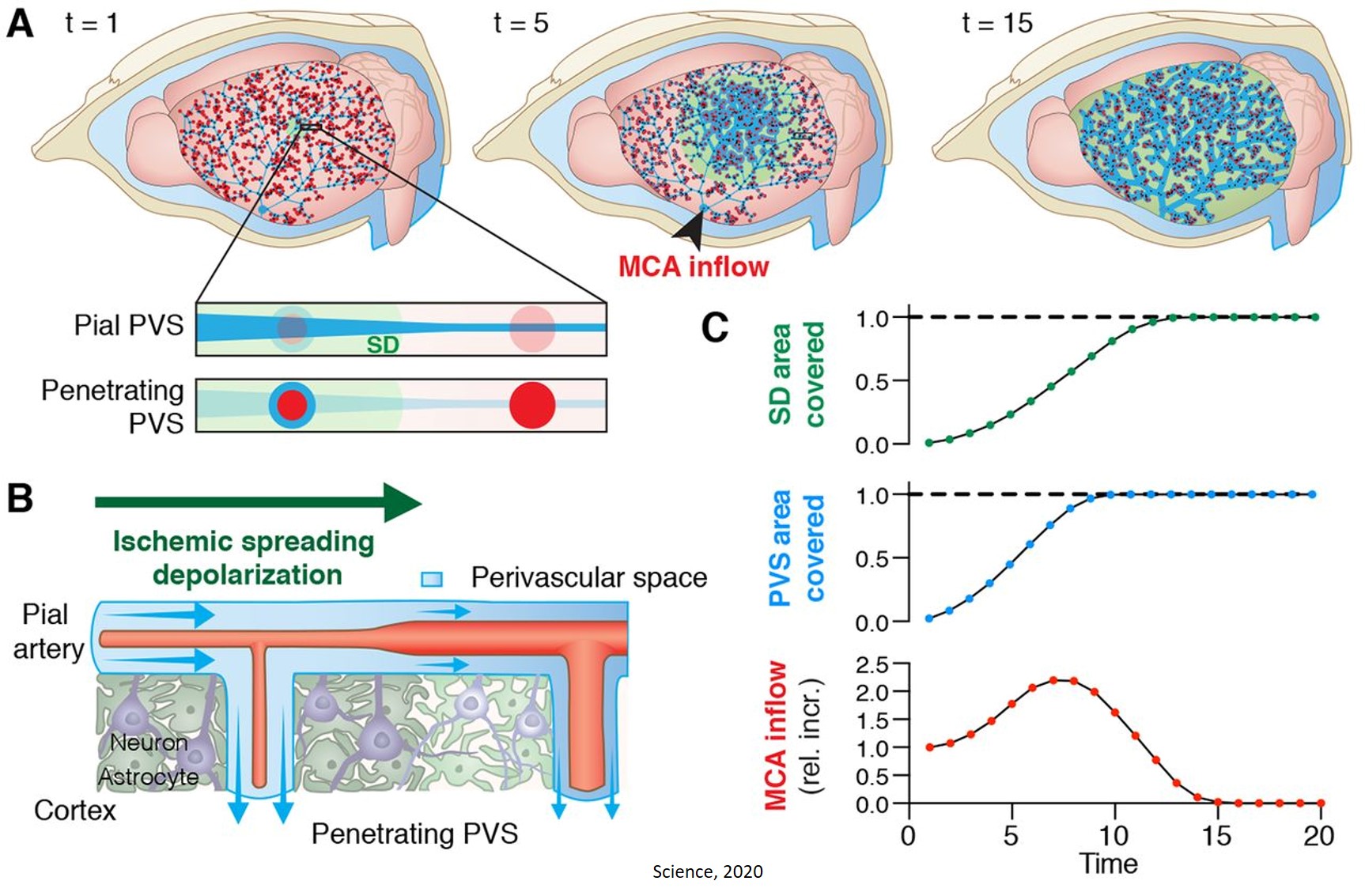 Cerebral edema, swelling that occurs in the brain, is a severe and potentially fatal complication of stroke. New research, which was conducted in mice and appears in the journal Science, shows for the first time that the glymphatic system - normally associated with the beneficial task of waste removal - goes awry during a stroke and floods the brain, triggering edema and drowning brain cells.

"These findings show that the glymphatic system plays a central role in driving the acute tissue swelling in the brain after a stroke", said the senior author of the article. "Understanding this dynamic - which is propelled by storms of electrical activity in the brain - point the way to potential new strategies that could improve stroke outcomes."

First discovered by the Nedergaard lab in 2012, the glymphatic system consists of a network that piggybacks on the brain's blood circulation system and is comprised of layers of plumbing, with the inner blood vessel encased by a 'tube' that transports cerebrospinal fluid (CSF). The system pumps CSF through brain tissue, primarily while we sleep, washing away toxic proteins and other waste.

While edema is a well-known consequence of stroke, there are limited treatment options and the severity of swelling in the brain depends upon the extent and location of the stroke. Because the brain is trapped in the skull, it has little room to expand. If the swelling is severe, it can push in on important structures such as the brainstem, which regulates the cardiovascular and respiratory systems, resulting in death. In extreme cases and often as a last resort, surgeons will remove a part of the skull to relieve the pressure on the brain.

Prior to the findings of the new study, it has been assumed that the source of swelling was the result of fluid from blood.

Ischemic stroke, the most common form of stroke, occurs when a vessel in the brain is blocked. Denied nutrients and oxygen, brain cells become compromised and depolarize - often within minutes of a stroke. As the cells release energy and fire, they trigger neighboring cells, creating a domino effect that results in an electrical wave that expands outward from the site of the stroke, called spreading depolarization.

As this occurs, vast amounts of potassium and neurotransmitters released by neurons into the brain. This causes the smooth muscles cells that line the walls of blood vessels to seize up and contract, cutting off blood flow in a process known as spreading ischemia. CSF then flows into the ensuing vacuum, inundating brain tissue and causing edema. The already vulnerable brain cells in the path of the flood essentially drown in CSF and the brain begins to swell. These depolarization waves can continue in the brain for days and even weeks after the stroke, compounding the damage.

"When you force every single cell, which is essentially a battery, to release its charge it represents the single largest disruption of brain function you can achieve - you basically discharge the entire brain surface in one fell swoop," said the lead author of the study. "The double hit of the spreading depolarization and the ischemia makes the blood vessels cramp, resulting in a level of constriction that is completely abnormal and creating conditions for CSF to rapidly flow into the brain."

The study correlated the brain regions in mice vulnerable to this post-stroke glymphatic system dysfunction with edema foundin the brains of humans who had sustained an ischemic stroke.

The findings suggest potential new treatment strategies that used in combination with existing therapies focused on restoring blood flow to the brain quickly after a stroke. The study could also have implications for brain swelling observed in other conditions such as subarachnoid hemorrhage and traumatic brain injury.

Approaches that block specific receptors on nerve cells could inhibit or slow the cycle of spreading depolarization. Additionally, a water channel called aquaporin-4 on astrocytes - an important support cell in the brain - regulates the flow of CSF. When the team conducted the stroke experiments in mice genetically modified to lack aquaporin-4, CSF flow into the brain slowed significantly. Aquaporin-4 inhibitors currently under development as a potential treatment for cardiac arrest and other diseases could eventually be candidates to treat stroke.