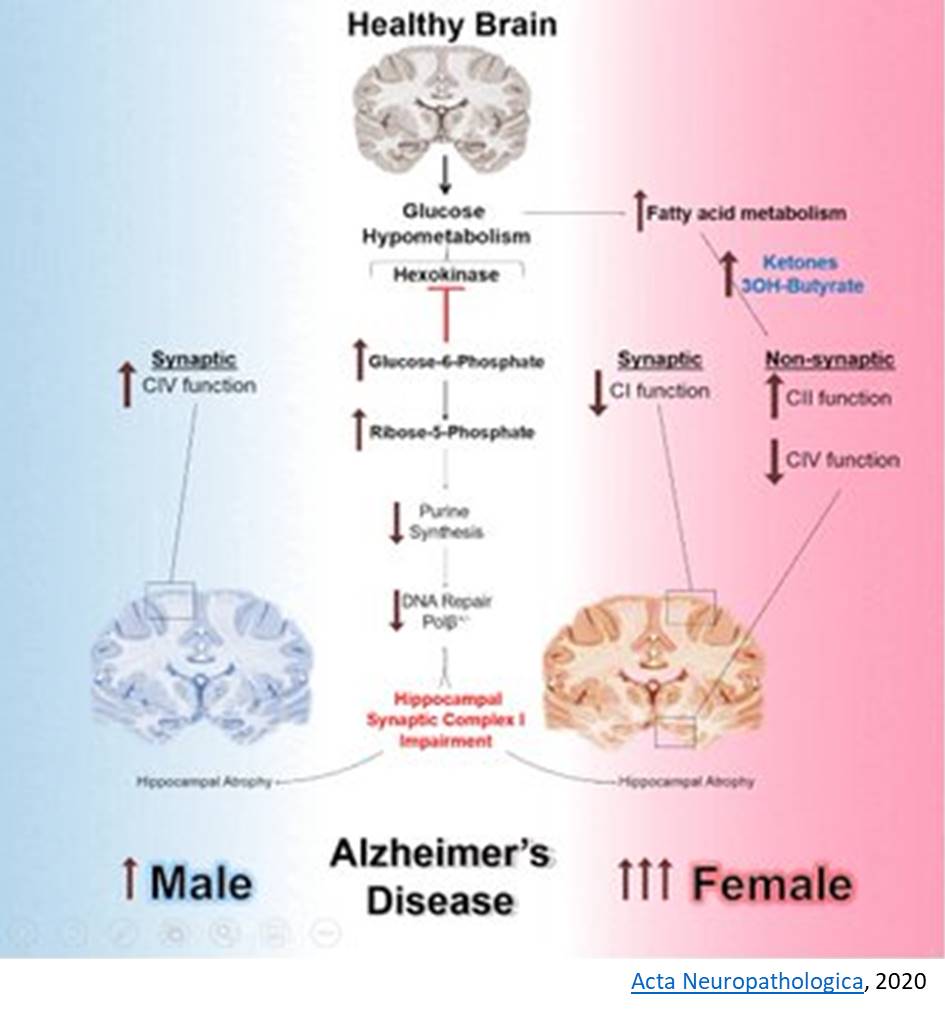 In the United States, two-thirds of Alzheimer’s disease diagnoses are in women. While it’s well-established there are indeed sex differences in the risk and prevalence of Alzheimer’s, scientists are unsure about why women are more likely to get this disease. Even when taking women’s average longer lifespans into account, the increased risk remains, indicating that biological sex differences influence how the disease begins and spreads.

To increase understanding, a scientific team used data and samples from participants in the Baltimore Longitudinal Study of Aging (BLSA) along with animal and human cell models to zero in on sex-based differences in how the brain metabolizes sugar as a culprit and potential therapeutic target. Their findings were published the journal Acta Neuropathologica.

Prior studies have shown that women with Alzheimer’s carry higher levels of amyloid plaques and neurofibrillary tangles than male counterparts. Women also have more severe cognitive symptoms compared to men at the same disease stages. Based on previous work in the field, the team knew that changes in brain glucose metabolism are seen decades before cognitive impairment becomes obvious. They focused on a cross-species approach to further investigate why problems metabolizing glucose (sugars) may be a prelude to dementia-like symptoms. To compare metabolic activity, they analyzed brain tissue and blood samples from BLSA participants who had Alzheimer’s, along with lab-grown human cell models of Alzheimer’s, two Alzheimer’s mouse models, and two specialized strains of flatworms.

The scientists observed that Alzheimer’s caused impairment in the mitochondria (cell “powerhouses") of brain synapses — junctions for chemical or electrical signals between neurons — in female, but not male, mice. Next, the mouse and human cell models consistently showed that the brain and body try to adapt to this metabolic impairment by shifting from processing glucose (sugars) to lipids (fatty acids.) The scientists then proved that this metabolic shift is needed for survival in both worms and human cell culture Alzheimer’s models.

Interestingly, further study of animal models and human cell samples showed that males were better able than females to adapt to this metabolic shift at the molecular level. These significant differences in mitochondrial mechanisms and metabolic responses to Alzheimer’s may explain why there are sex-related differences in risk and disease development.

This study also identified specific molecular and metabolic impairment sites and pathways in mice and humans that are likely connected to sex differences. Further research is needed to develop precision medicine targets for interventions.