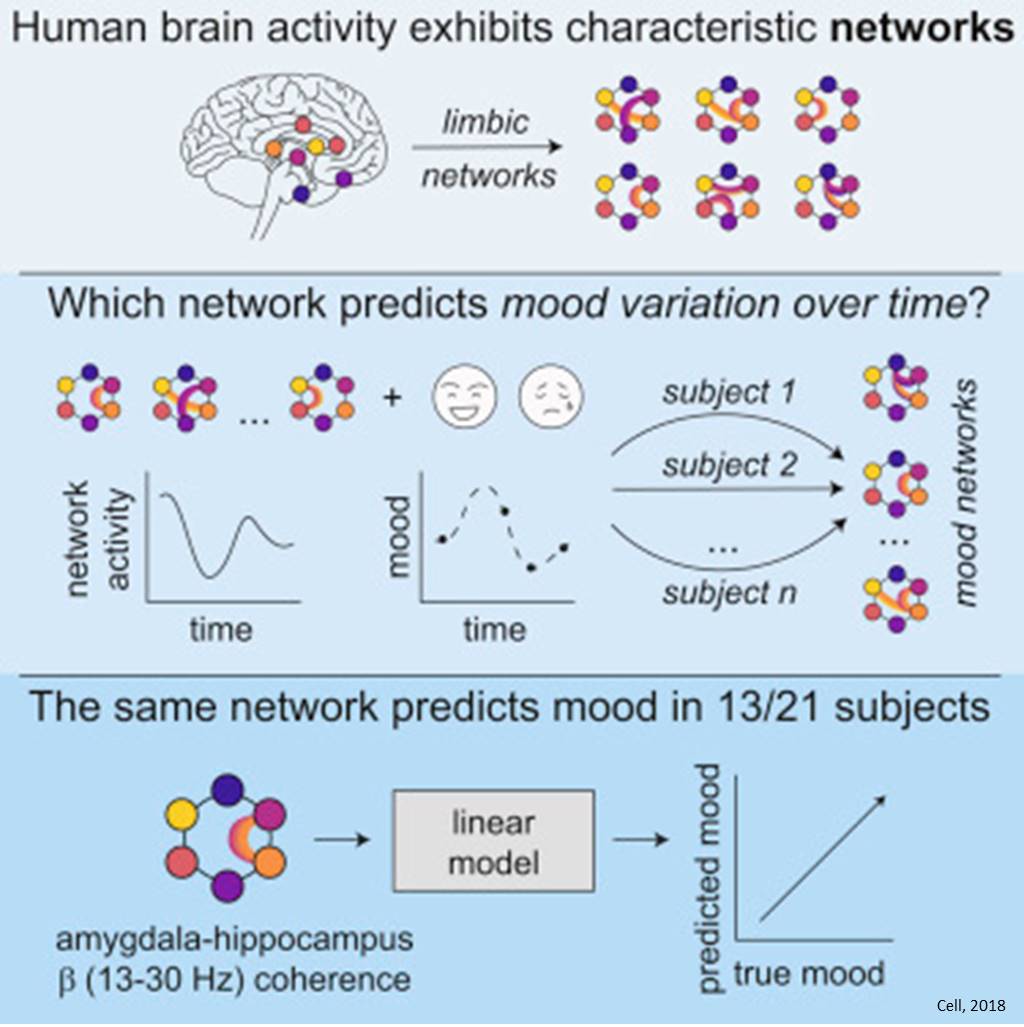 Most of us have had moments when we're feeling down -- maybe we can't stop thinking about our worst mistakes, or our most embarrassing memories -- but for some, these poor mood states can be relentless and even debilitating. Now, new research has identified a common pattern of brain activity that may be behind those feelings of low mood, particularly in people who have a tendency towards anxiety. The newly discovered network is a significant advance in research on the neurobiology of mood, and could serve as a biomarker to help scientists developing new therapies to help people with mood disorders such as depression.

Most human brain research on mood disorders has relied on studies in which participants lie in an fMRI scanner and look at upsetting images or listen to sad stories. These studies have helped scientists identify brain areas associated with emotion in healthy and depressed individuals, but they don't reveal much about the natural mood fluctuations that people experience over the course of a day or provide insight into the actual mechanisms of brain activity underlying mood.

Newly published research has begun to fill these gaps in our understanding of the neuroscience of mood by continuously recording brain activity for a week or more in human volunteers and linking their day-to-day mood swings to specific patterns of brain activity.

The researchers recruited 21 patient volunteers with epilepsy who had had 40 to 70 electrodes implanted on the brain's surface and in deeper structures of the brain as part of standard preparation for surgery to remove seizure-causing brain tissue. The researchers recorded a wide range of brain activity in these patients over the course of seven to 10 days, particularly focusing on certain deep brain structures that have been previously implicated in mood regulation. Meanwhile, the patients regularly logged their mood throughout the day with tablet-based software.

The researchers then used computational algorithms to match patterns of brain activity to changes in the patients' reported mood. To avoid biasing their analysis at the onset, the team did not look at the mood surveys right away. Instead, they first analyzed the long-term recordings of brain activity in each participant to identify so-called intrinsic coherence networks (ICNs). ICNs are groups of brain regions whose activity patterns regularly fluctuate together at a common frequency (like members of a college band, marching in lockstep). This synchronization was used as a clue about brain regions that communicate with one another in potentially important ways.

Then, to compare results across the unique brains and distinct electrode placements of all 21 research participants, the researchers mapped each subject's ICNs onto neural connectivity diagrams. Comparing these standardized records of network activity across subjects revealed several "cliques" -- groups of brain regions that repeatedly became synchronized at specific frequencies, and were therefore likely to represent functional brain networks.

One such clique was highly active and coordinated in 13 research participants, all of whom had also scored high on a psychological assessment of baseline anxiety conducted prior to the start of the study. In these same individuals, changes in the activity of this brain network were also highly correlated with day-to-day bouts of low or depressed mood. This mood-related network was characterized by so-called beta waves -- synchronized oscillations between 13 and 30 cycles per second -- in the hippocampus and amygdala, two deep brain regions which have long been linked, respectively, to memory and to negative emotion.

The research team was at first taken aback by the clarity of the finding. "We were quite surprised to identify a single signal that almost completely accounted for bouts of depressed mood in such a large set of people," said the author. "Finding such a powerfully informative biomarker was more than what we'd expected at this stage of the project."

Surprisingly, this powerful link between of mood-associated beta waves in the amygdala and hippocampus was entirely absent from eight other research participants, all of whom had comparatively low preexisting anxiety, suggesting new questions about how the brains of people prone to anxiety may differ from others in how they process emotional situations.

"Based on what we know about these brain structures, this suggests that interactions between the amygdala and hippocampus might be linked to recalling emotional memories, and that this pathway is particularly strong in people with high levels of anxiety, whose mood might then be heavily influenced by recalling emotion-laden memories," the author said. "We will need to investigate that hypothesis further, but as a psychiatrist it's deeply satisfying to begin to be able to provide a conceptual framework to patients to help them understand what they are going through when they feel down."