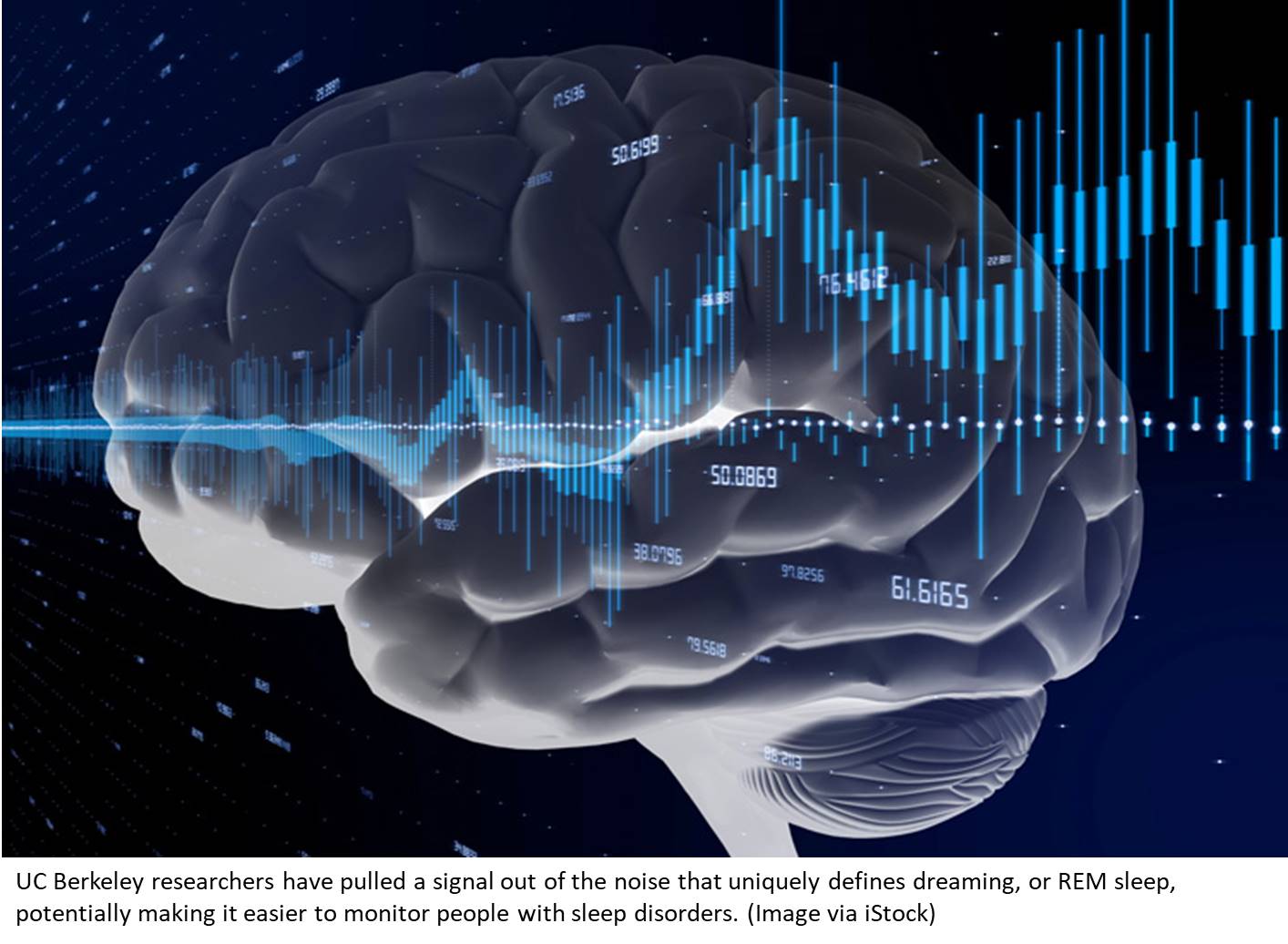 When we dream, our brains are filled with noisy electrical activity that looks nearly identical to that of the awake brain.

But researchers have pulled a signal out of the noise that uniquely defines dreaming, or REM sleep, potentially making it easier to monitor people with sleep disorders, as well as unconscious coma patients or those under anesthesia.

Each year, hundreds of thousands of people undergo overnight studies to diagnose problems with their sleep, most of them hooked up to an electroencephalogram (EEG) to monitor brain activity as they progress from wakefulness to deep, slow-wave sleep and on into REM sleep. But EEGs alone can not tell whether a patient is awake or dreaming: Doctors can only distinguish REM sleep by recording rapid eye movement -- hence, the name -- and muscle tone, since our bodies relax in a general paralysis to prevent us from acting out our dreams.

"We really now have a metric that precisely tells you when you are in REM sleep. It is a universal metric of being unconscious," said the senior author of a paper describing the research that was published in the journal eLife.

"These new findings show that, buried in the electrical static of the human brain, there is something utterly unique -- a simple signature," said co-author. "And if we measure that simple electrical signature, for the first time, we can precisely determine exactly what state of consciousness someone is experiencing -- dreaming, wide awake, anesthetized or in deep sleep."

The ability to distinguish REM sleep by means of an EEG will allow doctors to monitor people under anesthesia during surgery to explore how narcotic-induced unconsciousness differs from normal sleep -- a still-unsettled question.

"We often tell our patients that, 'You will go to sleep now,' and I was curious how much these two states actually overlap," said the first author of the study. "Anesthesia can have some side effects. If we learn a little bit about how they overlap -- maybe anesthesia hijacks some sleep pathways -- we might be able to improve anesthesia in the long run."

Sleep, as Walker wrote in his 2017 book, "Why we Sleep," "enriches a diversity of functions, including our ability to learn, memorize, and make logical decisions and choices. Benevolently servicing our psychological health, sleep recalibrates our emotional brain circuits, allowing us to navigate next-day social and psychological challenges with cool-headed composure."

Disrupted sleep interferes with all of this, increasing the risk of medical, psychiatric and neurological diseases.

Most sleep research focuses on the synchronized, rhythmic waves that flow through the neural network of the brain, from the slow waves that signal deep sleep, typically in the first few hours of the night, to the higher frequency waves typical of dream sleep. These waves pop out above a lot of general activity, also called the 1/f, that has typically been dismissed as noise and ignored.

"There is this background activity, which is not rhythmic, and we have overlooked that for quite a long time," the author said. "Sometimes, it has been called noise, but it is not noise; it carries a lot of information, also about the underlying arousal level. This measure makes it possible to distinguish REM sleep from wakefulness by looking only at the EEG."

Since slow waves are associated with inhibition of activity in the brain, while high frequency activity -- like that found during wakefulness -- is associated with excitatory behavior, the sharper drop-off may be an indication that many activities in the brain, including those related to muscle movement, are being tamped down during REM sleep.

The new measure quantifies the relationship of brain activity at different frequencies -- how much activity there is at frequencies from about 1 cycle per second to 50 cycles per second -- and determines the slope, that is, how fast the spectrum drops. This 1/f "drop-off" is sharper in REM sleep than in wakefulness or when under anesthesia.

The author found this characteristic measure in the nighttime brain activity of 20 people recorded via EEG scalp electrodes in Walker's UC Berkeley sleep lab and in 10 people who had electrodes placed in their brains to search for the causes of epilepsy as a necessary prologue to brain surgery to alleviate seizures.

The authors are now reviewing brain recordings from coma patients to see how their brain activity varies over the course of a day and whether the 1/f drop-off can be used to indicate the likelihood of emergence from coma.

"More importantly, I think it is another metric for evaluating states of coma," the author said. "1/f is very sensitive. It could resolve, for instance, if someone was in a minimally conscious state, and they are not moving, and whether they are more alert than you think they are."