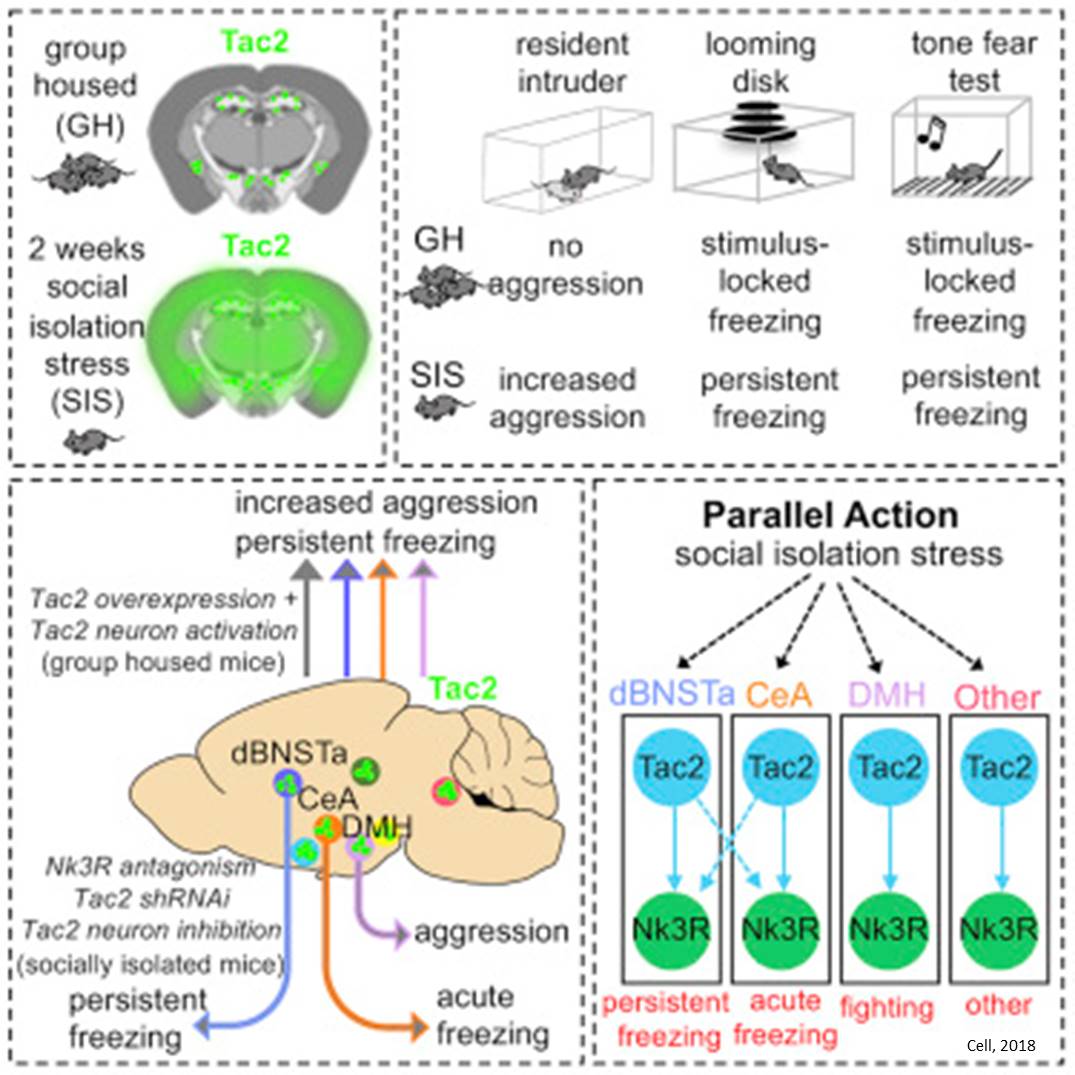 Chronic social isolation has debilitating effects on mental health in mammals--for example, it is often associated with depression and post-traumatic stress disorder in humans. Now, a team of researchers has discovered that social isolation causes the build-up of a particular chemical in the brain, and that blocking this chemical eliminates the negative effects of isolation. A paper describing the research appears in the journal Cell.

Confirming and extending previous observations, the researchers showed that prolonged social isolation leads to a broad array of behavioral changes in mice. These include increased aggressiveness towards unfamiliar mice, persistent fear, and hypersensitivity to threatening stimuli. For example, when encountering a threatening stimulus, mice that have been socially isolated remain frozen in place long after the threat has passed, whereas normal mice stop freezing soon after the threat is removed. These effects are seen when mice are subjected to two weeks of social isolation, but not to short-term social isolation--24 hours--suggesting that the observed changes in aggression and fear responses require chronic isolation.

In a previous study of the Drosophila fly, the laboratory had discovered that a particular neurochemical called tachykinin plays a role in promoting aggression in socially isolated flies. Tachykinin is a neuropeptide, a short protein molecule that is released from certain neurons when they are activated. Neuropeptides bind to specific receptors on other neurons, altering their physiological properties and thereby influencing neural circuit function.

To investigate whether the role of tachykinin in controlling social isolation-induced aggression might be evolutionarily conserved from insects to mammals, the team turned to laboratory mice. In mice, the tachykinin gene Tac2 encodes a neuropeptide called neurokinin B (NkB). Tac2/NkB is produced by neurons in specific regions of the mouse brain such as the amygdala and hypothalamus, which are involved in emotional and social behavior.

The researchers found that chronic isolation leads to an increase in Tac2 gene expression and the production of NkB throughout the brain. However, administration of a drug that chemically blocks NkB-specific receptors enabled the stressed mice to behave normally, eliminating the negative effects of social isolation. Conversely, artificially increasing Tac2 levels and activating the corresponding neurons in normal, unstressed animals led them to behave like the stressed, isolated animals.

The researchers also inhibited the function of Tac2 and its receptors in multiple specific brain regions. They found that suppressing the Tac2 gene in the amygdala eliminated the increased fear behaviors, but not aggression, while conversely suppressing the gene in the hypothalamus eliminated increased aggression but not persistent fear. The results imply that Tac2 must increase in different brain regions to produce the various effects of social isolation.

Though the work was done in mice, it has potential implications for understanding how chronic stress affects humans.

"Humans have an analogous Tac2 signaling system, implying possible clinical translations of this work," says the author. "When looking at the treatment of mental health disorders, we traditionally focus on targeting broad neurotransmitter systems like serotonin and dopamine that circulate widely throughout the brain. Manipulating these systems broadly can lead to unwanted side effects. So, being able to precisely and locally modify a neuropeptide like Tac2 is a promising approach to mental health treatments."

A novel genetic model of down syndrome in rats